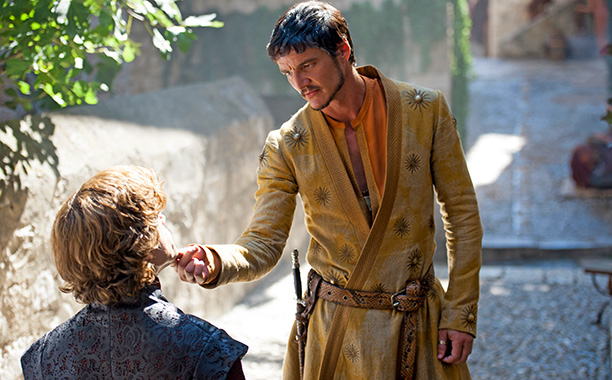 It’s hard to believe that it’s been less than a year since last I delved into Westeros and its particular brand of violent revolution. The books, which once felt so fresh in my mind, are now a fading three  year old memory. I could probably do research and remind myself of exactly what happened in the written version of A Song of Ice and Fire, but I’m kind of enjoying not knowing whether, for example, the awesome showdown between Magnar Thane and Tormund Giantsbane is a creation of its television incarnation. This is to provide a disclaimer: my knowledge of the books is fuzzy and circumstantial, but it’s there and will occasionally creep into my reviews as we travel throughout tthis season of Game of Thrones. I’ll avoid out-and-out spoilers, and do my best to properly label anything else.

We begin the season on an image of a new sword being built. In a brilliantly place scene, we find out from Tywin that this particular piece of beautiful valyrian steel was made out of the leftovers of the defeated Starks’ blade. He gives one of two swords to Jamie, who becomes the third Lannister child to disappoint his brilliant father when he reaffirms his desire to remain in the Kingsguard. This scene feeds directly into an absolutely beautiful scene later, where Jamie, Joffrey and the current head of the Kingsguard trade barbs and veiled threats over Jamie’s lost hand. I just honestly don’t think I will ever grow tired of hearing people mock Jamie over being single handed.

The sword that begins the episode, and the violence that ends it, speaks as a mission statement for season four of Game of Thrones: you thought the Red Wedding was bad? You ain’t seen nothing yet. The veracity of that claim is still to be checked, but certainly the first episode back provides a lot of violence and threats of violence. Danaerysus seems to be losing her control over her dragons, but even still regains her absolute disgust with the people she will have to conquer on her way to Westeros. Arya draws first blood casually and vengefully.

The most important arrival, plot wise, is Oberyn Martell, from Dorne. For those who don’t sit at home and frantically scribe out the relationships between the too-many houses of Kings Landing, here’s a brief summary. Elia Martell was married to Raegar Targarayen. Raegar’s the guy who ran off with Lyanna Stark (who was supposed to marry Robert Baratheon, otherwise known as the fat king who was killed by a boar in season one). When Robert and Ned Stark started the war, Robert and the Lannisters overtook King’s Landing, where the Lannister’s man, THE MOUNTAIN, dashed Elia Martell’s head against the pavement after raping her and killing all her kids.

Oberyn, therefore, holds a bit of a grudge. His arrival is GOT sexposition at its best – a brief scene with whores and bastards providing us all we need to know about this man, his sexual appetities, and the extent to which he should not be discounted. He’s a violent, angry man who makes Tyrion nervous.

Also making Tyrion nervous? Pretty much everything. Tyrion, audience favorite and occasionally audience surrogate, sees just how insane his situation and the situation inside kings landing has gotten.

Out at the Nights Watch, we’ve got Ygritte nursing a broken heart and a murderous rage while an even scarier group of Wildlings arrives on the scene. Apparently getting laid helped Jon Snow develop a second emotion, because Kit Harrington is positively engaging when he tells of the old men of the Nights Watch and explains to them how to escape certain doom. For the first time in the series, you understand why he’s being looked at as a leader.

Like most first epiosdes for Game of Thrones, this one is all about setting the stage, reintroducing us to the characters we know and love, and setting up the new characters who will befuddle us. There’s lots we didn’t see, and lots we only saw tantalizing little. Unlike a lot of other season premieres, this one felt surged with purpose.  Season Three was a practically perfect endeavor, and a buzz-worthy one to boot. For fans, especially those who have not read the books, moving forward after the Red Wedding is going to be a difficult maneuver. And yet the show has never seemed more sure-footed.  This is not a show about to run out of stories. The premiere doesn’t even touch on Stannis or the Red Woman, the night walkers, Bran and Rickon….

And let’s not forget, winter is coming.