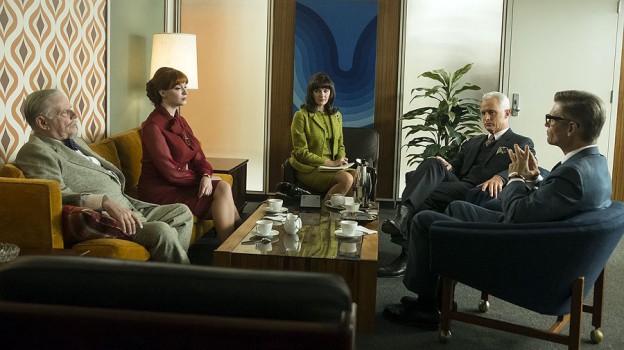 It’s Valentine’s Day 1969, and love bitter resentment is in the air at SD&P. Peggy steps off the elevator feeling festive, and spots a bouquet of flowers waiting on her secretary’s desk. Peggy is immediately smitten by the fact that Ted, her very brief fling, is still thinking of her all the way out in Los Angeles. She grabs the flowers and takes them into her office, giving Shirley the secretary a coded message of thanks to send to Ted. It would be almost sweet, if the flowers actually were for Peggy, when instead they were actually meant for Shirley, the lowly secretary. Complications worthy of a classic Tracy/Hepburn film quickly ensue, involving SC&P offices on both coasts, which only subside when Shirley informs Peggy of who the flowers were intended for. And wow is Peggy ever terrible at acting like she’s not super angry.

Peggy storms off to find Joan and demand a new secretary to replace Shirley. Joan is already having a bit of day, as the BLANK Lou Avery has also demanded a new secretary, as he is fed up with having to share Dawn with the absent Don Draper. Joan attempts to pleas everyone, swapping everyone around until Dawn ends up at the office entrance. It looks like Joan has managed to put out all the fires, until Bert Cooper (hey Bert is still alive!) shuffles in and -orders- requests that the African American Dawn be moved away from the front desk. People can see her from the elevator, you see. Joan snaps at Bert, but has no choice other than to do what he says. Jim Cutler overhears about Joan’s predicament and offers her an out. Because she is essentially working two jobs as Head of Personal while also managing her own accounts, Joan certainly deserves to get her own office upstairs. It’s a wonderful acknowledgment of the years of work and everything Joan has sacrificed for the company. Dawn replaces her as Head of Personal, while Joan gets the recognition she deserved far earlier.

Jim has been making waves around the office all day, after stepping in between Pete and a new account he wants to bring in. During a hilariously malfunctioning long distance phone call, Jim insists on running this new account past GM in Detroit, which means involving Bob Benson. Pete and Bob have an awkward history, and Pete is in no hurry to work with him again. Despite the efforts of Roger Sterling, Jim wins out, and Pete sees a deal which he felt like a spam dunk get much more complicated. Jim and Roger, the resident elder statesmen of SC&P have a classic Mad Men style terse conversation in the elevator, and if this were Game Of Thrones one of them would have totally stabbed the other one in the neck.

The oldest Draper child makes her first appearance of the season in this episode. The mother of one of her schoolmates has tragically passed away, and Sally and her friends are given the day off. Like any group of stupid teenagers, they bolt from their responsibilities as soon as possible and head into Manhattan for a shopping spree. Sally leaves behind her purse, forcing her to miss the train back in order to go look for it. Now stranded in the city, Sally heads to the SC&P offices to find her father and, most importantly, his money. Don has been put on paid leave for months now, but he has kept this secret from his family, so Sally is completely surprised to find Lou Avery in her fathers office. She eventually goes to Don’s apartment, and waits for him to return from a meeting with another agency. Don is shocked to find Sally there, but he quickly comes up with a made up excuse to explain his absence, and decides to drive her home. As they’re leaving, Don gets a call from Dawn informing him of Sally’s arrival at the office, but he keeps his knowledge of this hidden from his daughter.

After a bit talking around the subject, Don and Sally stop at a restaurant for diner, and the whole truth comes out. Sally admits that she went on a shopping spree, and Don admits that he is on leave from work because he told the truth about himself. Sally asks what that is, and Don gives the most important line in the episode: “Nothing you don’t already know”. Sally has been through a lot with her father, but the last season ended with Don opening up to his children about his past in a way that no one else had experienced. A few years ago, this scene would have ended in screaming match, and Sally would have had a tantrum and tried to play her parents against each other, but now there is a new relationship between them. Sally is the reason that Don has made an effort to avoid repeating his past mistakes, and to embrace the truth even when it’s ugly. Sally rewards her father with the acknowledgement of her love, and it’s obvious how much that truly means to him.