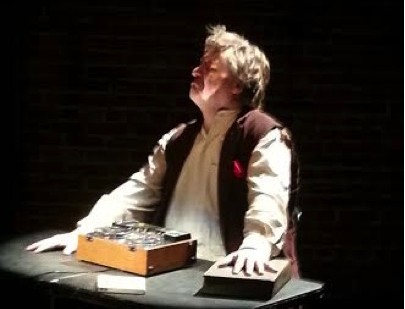 The program notes for Fort Point Theatre Channel’s double bill (Reel-to-Reel) described Samuel Beckett’s great play Krapp’s Last Tape as a play that “focuses on a difficult life choice—between doing what feels like great art and pursuing a great personal love.” That is certainly one focus of the play. This one-act, one-man-show can be summarized in a sentence: a sixty-nine year old man listens to a recording that he made thirty years prior, silently pondering his life before making a new, futile recording. I didn’t find Krapp’s past decision, as terrible as the consequences may have been, as compelling as the focus on a more troubling dilemma. Throughout the evening, all I could think of was the question John Guare poses in his screenplay version of Six Degrees of Separation: “How do we keep what happens to us?” This production, fantastically performed and staged, had me thinking that perhaps what happens to us possesses us far more than we ever could possess it.

In this production, directed by Marc S. Miller, Steven Barkhimer delighted (and seemed to delight in) embodying the disheveled, disillusioned, dissolute Krapp. He did not skimp on one opportunity of expression; the laborious, arthritic swing of his legs and hips, the shakiness of his hands, the pained squints at the ledger, keys, and box labels, the sickening grunts and groans as he consumed banana after banana, offstage bottle-of-booze after offstage bottle-of-booze. But despite the virtuosity of his overall physical performance, the real expression was in his face. Barkhimer’s face was all unshaven jowls and bared teeth, and his eyes (alternately vacuous, enraged, deadened), were mesmerizing. The dinginess of the room (scenic design by Rick Dorff) paled in comparison to that of this strange old man, sitting almost in the dark and listening to his former self, as much a stranger to himself as to us.

Here is a man that, with the flip of a switch, is able to replay previous moments of his life. Well, not exactly. He can access previous moments through the filter of his previous self and that self’s perception of those moments. But this implies that we can never keep an actual experience; the moment rots as surely as the medium with which we capture it will. Paper, celluloid, our own grey matter; nothing stands a chance against the ravages of time. Yet that does not stop the past from destroying the present, as Krapp’s current dissipation colorfully illustrates. We can’t keep what happens to us. We can only be lacerated by our perceptions of it.

Our tainted perceptions, our memories, are the custodians of experience. Even perfect preservation becomes meaningless in light of this greater truth. In part two of this double bill, Skylar Fox’s play The Archives, directed by Tasia A. Jones, explores similar themes of memory, regret, and mortality. Anna (Allison Smith), an undergraduate student just turned twenty-one years old, receives from her distanced mother (Karin Trachtenberg) a box of reels that she wants Anna to digitize. Anna receives help from her university librarian (Sally Nutt) to do so. Spoiler alert: the reels are actually Krapp’s recordings of his life (but more on that later). All three women muse throughout the short play on their lives, and how one can never really determine the sort of person one will ultimately become.

Smith embodied Anna with very humorous naturalism. Being fairly close in age to this character, it was entertaining and gratifying for me to see the portrayal of a young person grappling with opaque yet deeply personal issues, struggling to come to terms with herself, without the character being turned into a caricature of some sort of “typical” college student. Her comic timing was great, and her slightly neurotic Anna played off well with Nutt’s serene archivist during their goofy yet poignant conversations. But I reserve most of my gushing for Trachtenberg. The story of Anna’s mom is what really made The Archives seem like the ideal choice to pair with Krapp, and made me grateful that it was chosen out of over a hundred of submissions to the call put out by FPTC.

Krapp’s Last Tape and The Archives seem like a natural and obvious pairing given that Fox’s play was directly influenced by Beckett’s. But the combination felt more successful during some points of The Archives than others. For example: Anna’s decision to make a recording of her own came out of the blue. Smith portrayed vividly Anna’s inherent discomfort mixed into the absorption with which she begins to open up about her life, but it was unclear to me what motivated Anna to choose to begin recording her own “tape” rather than do anything else during 30 hours of digitalizing reels. Not seeing that decision made that moment come off as “Get it? It’s like she’s like Krapp too!”

I was equally unmoved when, during an otherwise lovely and compelling presentation by the librarian to an undergraduate class, we discover that, in fact, the librarian was Krapp’s long lost love. “Get it, audience? The stories are connected!” It was perfectly convincing, but the bald connection between the plays (beyond the mere presence of the reels) felt forced.

However, Fox’s incredibly smart dialogue more than made up for those slightly ham-handed plot connections. The mom got the best moments; every single one of Trachtenberg’s monologues conveyed the spirit of Krapp’s Last Tape without any overt reference to it. Anna’s mom’s musings on her life as she tries to piece it back together, as she conveys these musings painfully in the messages to her daughter, mirrored Beckettian humor and despair at perceiving life’s failures and absurdly trying to soldier on, regardless. The bleakly humorous and humorous bleakness of Krapp is not present in The Archives’ more hopeful ending, but there is enough depth in what the characters don’t say in The Archives to keep it suitably unsettling.

Both shows were phenomenally lit (lighting design by Ian W. King); I smiled as I heard an audience member behind me say “It was done so well, the light became another character onstage!” The sound was also practically flawless in the many recordings and music played in both shows (sound design by Mark Warhol). While the set was very effective for both plays, I have to admit some of the staging in The Archives was confusing. It became unclear to me at times whether Anna was receiving (reading) her mother’s messages when both were onstage and her mom was speaking. Certain locations changes where the space and props ultimately remained the same were also unclear. But these small faults do not take away from the overall performance.

I commend Fort Point Theatre Channel for this experimental pairing, a pairing I would deem a success. Taking a quick look at the future projects they have coming up, I would say they are living up to their mission of “creating and sustaining new configurations of the performing arts.” I’d recommend Boston theater-goers keep a close eye on this company; I, for one, certainly will.