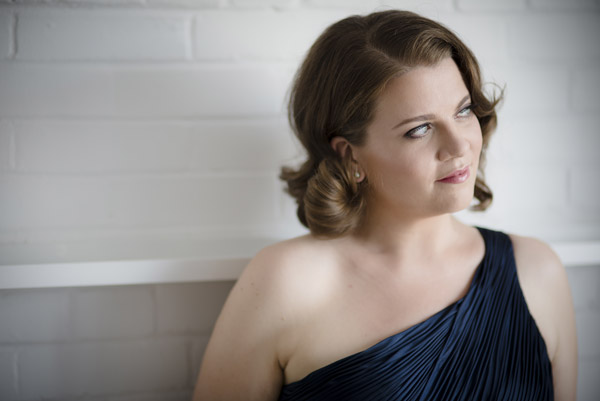 In my never-ceasing quest for an emotional connection to opera as a medium, Canadian soprano Ileana Montalbetti was a great help in 2013. Her performance as Ellen Orford in the Canadian Opera Company’s production of the contemporary Benjamin Britten tragedy Peter Grimes was not only technically sensational but emotionally riveting- a rare achievement.

Can you remember your first experience with opera?
Apparently, I was five years old and we were living in the apartment attached to my grandparent’s house.  I had found Mozart’s Le Nozze di Figaro on the CBC French channel.  My grandmother called me for dinner and I told her that I wouldn’t eat until the opera was finished.  I don’t ever remember not loving opera.

What is it about opera specifically that made you want to pursue it professionally?
My mother is trained opera singer and my father is trained actor and they both now teach in their respective fields.  I grew up in a very artistic household and many of my aunts and uncles are trained singers and musicians.  In a sense, I didn’t really know that other careers existed and I have always just kept on following my dream wherever it has taken me.

What performers have always inspired you? Are they the same today?
I grew up in Saskatoon, which is a city full of culture and since my parents are both performers we saw a lot of live theatre and music.  I was also lucky enough to attend both an elementary and high school that had very strong arts programs where I had the opportunity to be a part of choirs, plays and musicals and I also performed with local amateur companies.  I was always inspired by the performers around me and looked up to them.  It was always amazing to see people I knew pursuing their dream and sharing their gifts.  This has not changed, I am still the most inspired by the people around me and the artists I have watched and worked with; specifically as an Ensemble Member at the COC.  In particular, Adrianne Pieczonka, who is such a consummate artist.  She is truly an inspiration and I feel so lucky to know her on a personal level having watched her perform many times and to have had the opportunity to talk with and coach with her.

Tell us about your first big role.
My first, full operatic role was Contessa Almavia in Le Nozze di Figaro by Mozart.  It was in my first year of the Opera Diploma program at the University of Toronto.  As I said, this opera has always held a special place in my heart so to sing my first role in the opera was incredibly exciting and nerve wracking!

How does working with the COC compare to other international companies?
Since I am in the very beginning stages of my career I haven’t worked at that many international companies.  Since I was a member of the Ensemble Studio at the COC, it is very much home.  It was incredibly exciting to come back, as a graduate from the program, and take on the role of Ellen Orford in Peter Grimes.

Your My Theatre Award nomination is for Peter Grimes. Give us some insight into preparing that piece.
I began preparing the piece a year in advance.  In the beginning, I listened to and watched the opera many times but then put the recordings away and began to delve in myself.  I also read the chapters, pertaining to Ellen and Peter, from The Borough, the George Crabbe poem that the opera is based upon.  I worked with coaches in London and Zürich and spent intensive time with both of my teachers Wendy Nielsen and Mel Braun.  To get a feel for the sea and environment and town that the opera is set in, I visited Aldeburgh where Benjamin Britten and Peter Pears lived.  It is a beautiful, British sea town and it was wonderful to stand and watch the ocean and hear the waves and to see what Britten was translating in to his music.

Is the experience different when you’re singing in English?
Singing in one’s native tongue poses a different set of challenges.  When we sing in a foreign language one takes their time translating the score word for word and then constructing a poetic translation, really trying to make sense of every word and sentence.  Obviously, there is no need to translate an opera in your native tongue but it does not mean that we should not take the same care with the libretto.  It is easy to skip taking the time with the text but it is extremely important.

How does such a contemporary piece compare to singing one of the classics?
When singing a contemporary piece there are often rhythmic or musical passages that take a bit more brain power than more classical pieces.  There were a few passages in Grimes that I would always be sure to count precisely and I would not take my eye off Johannes [Debus], our conductor.

Tell us about working with fellow nominee Ben Heppner as Peter.
It was a huge thrill working with Ben!  He is an incredibly generous and supportive colleague.  His career has been phenomenal and it was wonderful to watch him work and learn from all of his experiences, in general, but also in his depiction of Peter.  This was my role debut so to be surrounded by a cast of such seasoned performers really encouraged me to work hard and rise to their level.

Do you have a favourite moment or memory from that opera?
Peter Grimes is an amazing ensemble piece and it relies upon the forces of the chorus to create The Borough, the town in which the piece is set.  The chorus at the COC is one of the best, if not THE best, in the world!  My favourite moments in the opera were being on stage with the entire ensemble and chorus.  It was thrilling the sound that everyone created together but also being surrounded by so many friends and colleagues was wonderful.

Who are some of your favourite people to sing opposite?
As I’ve said, singing with Ben was a huge thrill!  I’ve also had wonderful experiences singing both Antonia and The Voice of the Mother in The Tales of Hoffmann.  I sang Antonia with Edmonton Opera, last season, and David Pomeroy was Hoffmann.  It was wonderful to sing with him!!  Previous to that, I sang The Voice of the Mother at the COC and it was fantastic to sing the final trio in the Antonia Act with Erin Wall as Antonia and John Relyea as Doktor Miracle.

Do you have a favourite director/music director?
I have worked with Johannes Debus many times at the COC.  He is a wonderfully passionate music director, truly insightful and eloquent but he also strives for a true collaboration between conductor and singer.  I always feel incredibly happy and safe when he is in the pit.  Harry Bicket is someone else I really enjoyed working with.  He was the conductor of Idomeneo.  It was my second year in the Ensemble and this was the first time we were given our own performance of one of the operas in the season.  I sang Elettra – it was an incredible experience that I will never forget and Maestro Bicket made it even more wonderful!

What about composer?
I have always loved Mozart and have had the opportunity to sing many Mozart roles.  I love his operas and the characters he develops, they are incredibly three dimensional and interesting to play.  His operas are still so relevant as they are about human relationships.  I always discover something new every time I go back to one of his pieces.

What has been your favourite role to date?
I have been very luck to sing many wonderful roles but last spring I sang Leonore in Beethoven’s Fidelio with Michigan Opera Theater which was truly a dream come true!

What about dream roles?
Tosca, Turandot, Brünnhilde, Elektra, to name a few…

What are you working on now?
I am currently in Europe taking auditions, learning German and just trying to soak up the culture.  I am working towards some exciting roles next season, unfortunately, I’m not at liberty to say which ones just yet but I am thrilled!

Is there anything you’d like to add?
I would like to thank you for the nomination and interview!