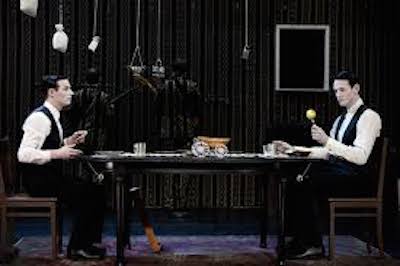 Astounding Feats of Movement in Lebensraum

How did they do all that? That was the prevailing thought left in my mind at the end of visionary director Jakop Ahlbom’s Lebensraum (Habitat), ArtsEmerson’s latest presentation of a piece of Dutch experimental theater. It’s part mime, part Cirque du Soleil-esque festivity of pictorial theatrical imagination, part alternative rock concert. The production soars with an impressive display of talent in a cohesive, gripping evening of theater.

Loosely based on Buster Keaton’s 1920 film, The Scarecrow, Lebensraum is essentially a silent movie with live actors on a stage. Two mimes, Reinier Schimmel and Yannick Greweldinger, each wear make-up to look like Keaton. The two Buster Keatons live in a house of inventive imagination akin to Wallace and Gromit. There is an extravagantly automated dining room table filled with pulleys and levers and a bed that doubles as a piano, as well as secret entrances in almost every foot of the wall with musical duo Alamo Race Track blending in with the wallpaper to add some alternative rock to their silent world. They inadvertently send their habitat into a state of chaos when they bring home an automated, life-size doll to be their maid.

Though the actors are trained mimes, this isn’t a pantomime piece. In fact, we have a set full of complex props that form the eccentric habitat of the mimes. The actors use mime not in the creation a physical space, but in a celebration and medium-transformation of the physical feat and hilarity of the world of silent film. Schimmel and Greweldinger, with such skill and demand of their bodies, perform complex and hilarious stunts that require split-second accuracy, all with a sense of emotional development and dramatic arc that make the piece not merely a circus but also a silent drama. The actors embody the joy and skill of Buster Keaton, creating a sort of ballet of movement in their world. Mimes tend to get a bad rap in the art world, at least in America. I’ve never quite understood popular aversion to mime; it’s always struck me as a fascinating and excitingly theatrical form of performance where artists use the utmost skill to create entire worlds using only their own bodies as tools. In any case, the mime-work in Lebensraum is so unconventional and impressive it would likely impress even those who normally dislike mimes.

Well-integrated with the performances, the set design by Douwe Hibma and Ahlbom is highly functional and evocative of the 1920s, capturing the look of the silent film era with lush sepia tones throughout the stage. The color of the production becomes brilliant upon the introduction of the doll-maid, who shines in a yellow sundress, bringing lively color into this sepia-tone world.

Silke Hundertmark as the doll gives one of the most impressive performances I’ve seen on a stage. Incredibly, for about the first ten minutes of her role, she is so still and frozen that she appears to be an actual life-size prop rather than an actor. Even as the Buster Keatons carry her around the room and fold her legs and arms, Hundertmark gives no sign of being a living actor. So when the doll first makes a few slight twists of the wrists and begins her transformation into a living being, there is a staggering revelation that this doll-prop has actually been an actor with astonishing control over her body. It’s one of those magic moments of live theater, a testament to the power of the medium to showcase unbelievable triumphs of human ability and artistry. The remainder of Hundertmark’s performance is continually gripping. She exudes a robotic kind of stiffness befitting a doll, reminiscent of the challenging albeit brief toy doll dance in The Nutcracker ballet. Only this doll must keep up that movement for more than an hour, and gradually yet precisely lessen her robotic stiffness as the play progresses and the doll becomes more lifelike.

All this terrific movement, much like silent film, relies heavily on background music for its overall effect. One might not think that contemporary rock would go well with an adaptation of a Buster Keaton movie, but, somehow, with Ahlbom’s vision, it blends seamlessly. Alamo Race Track, a duo of two musicians, simply stand in various costumes with the mimes as the action moves along, completely unfazed as the Keatons come close to causing them serious injury amidst all the antics. Despite being present with the mimes, the musicians seem to exist in something of a parallel world of tranquil performance, calmly supporting the action with rich sound. It is alluring music, a bit close to soft rock in the vein of Mumford and Sons, yet distinctive in the musicians’ cool, crisp vocalizing. It’s another element of Lebensraum that pulses with its uniqueness, subverting expectation and adding to the bizarre feeling of creativity of the world of the play.

We can always rely on ArtsEmerson to bring Boston theater like this, theater that’s so stirringly unique it may almost seem off-puttingly alien at first. But that’s one of the great joys of theater, the power of theater to bring us into new worlds we may not normally seek out or expect. The value of ArtsEmerson is that the company strives to present work that we would likely never see in Boston, and I always look forward to whatever strange and exciting thing they have for us next.