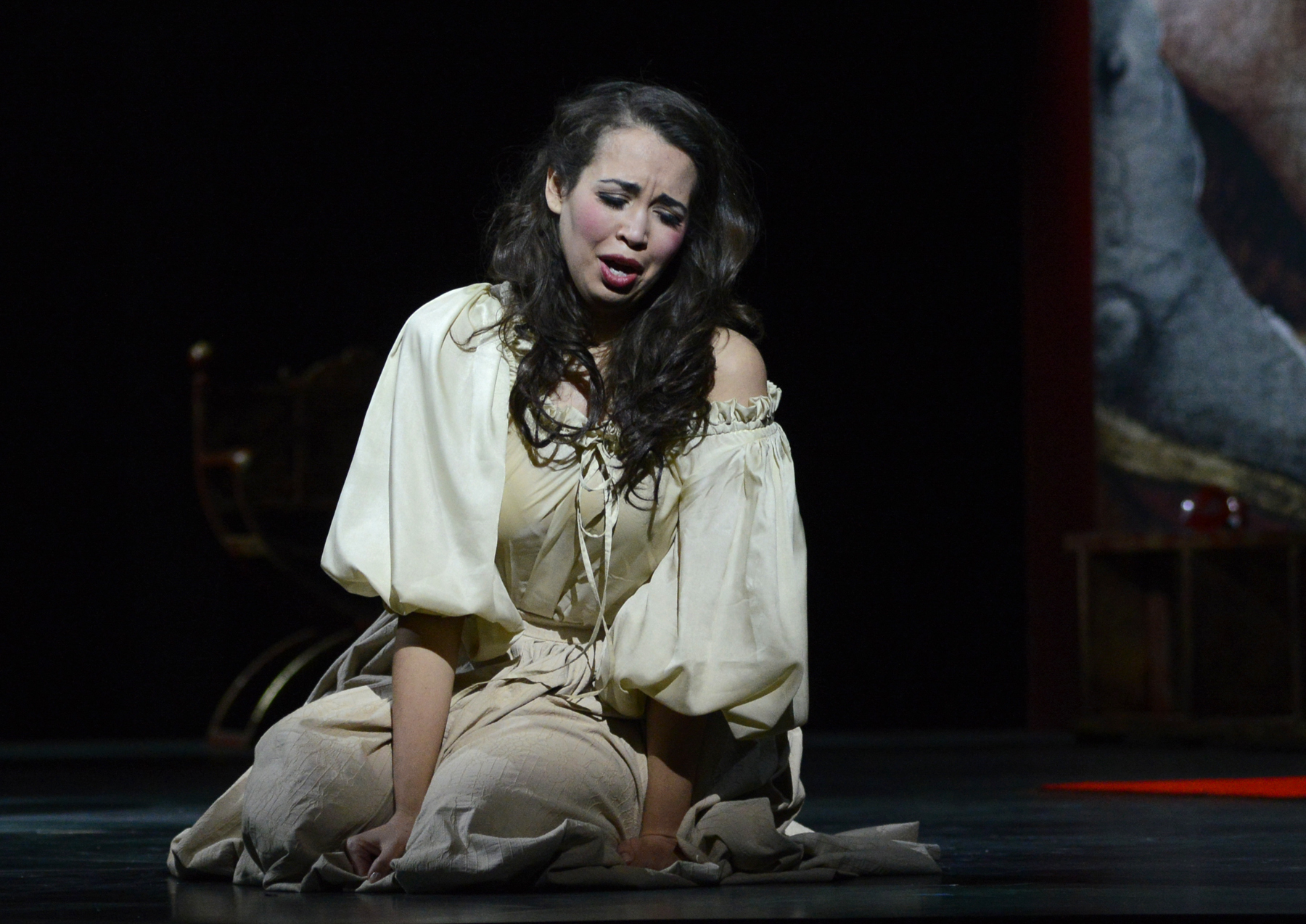 Opera and subtlety don’t often go well together. Opera comes from the greatest possible highs and lows of the human experience, from the glorious pain of love, murder, and suicide. So, it is stunning to see a new production of Verdi’s Rigoletto full of subtle nuance in its direction and acting, bringing out its grandiose themes with a contemporary, elegant approach. That directorial nuance, along with exquisite singing from the leading roles, makes the Boston Lyric Opera (BLO)’s production an enrapturing experience.

Rigoletto tells a dark, bleak story of the eponymous cursed jester who vows revenge when a misogynistic duke seduces Rigoletto’s sheltered daughter. It’s a world of despairing tragedy where misogyny and bigotry create a city of kidnappers and murderers. John Conklin’s set design captures the painful atmosphere of the piece with a scenic palette of dark greys and blacks and deep reds. The opera remains set in its Renaissance period, unlike some recent new productions that reset the work in something like Las Vegas or The Planet of the Apes. The sets of the exterior scenes, especially in the opening scene/sole festive section of the opera, offer some symbolic Renaissance splendor, with a giant Italian painting and a marble city in the background alongside lavish costumes by Victoria Tzykun. But the colors are so bold in these scenes, with so many reds and blacks, that the set design creates an uncanny, disturbing feeling of excess, preceding the dreary emptiness of the prison-like interior scenes that have a uniform blanket of dark drapery covering the walls. All the elements of the design consistently embody the darkness of the opera but pulse with energy in their deep, vibrant color.

The most effective piece of scenery, though, is a downstage transparent scrim the production uses for duets, with the singers separated, one in front of the scrim and one behind it. Through Robert Wierzel’s absorbing lighting design, the scrim appears blood red to evoke a feeling of hellish evil and eventually morphs into a brilliant purple late in the play upon the presence of an angelic spirit. The coloring effect is simple, but with the ghostly translucency of the scrim and the way it consumes the entire stage in color, the effect brings a spectacularly alluring sense of emotional symbolism to the stage.

This production’s vocal performances are as stirring as its design. Bruce Sledge as the Duke of Mantua is a powerful tenor, embodying the brutal and almost superhuman strength of his character. His “La Donna e Mobile,” the famous woman-hating aria, is so powerful and disgustingly joyful that I feel physically sick as Sledge sings. What really makes the aria resonate for me is its simple, naturally minimalist direction by Tomer Zvulun. Sledge sits almost completely still during the aria, with only the slightest turns of his body. The simple, confined movement gives the scene a sense of naturalism, unusual for opera, which heightens the stomach-churning brutality of the scene. This kind of directorial approach emerges throughout the opera, with characters making the most subtle graces in their movements, keeping their performances lively and intense in their nuance. From the slow, foreboding walk of the villainous Sparafucile sung by Morris Robinson to the individualized actions of the company during crowd scenes, Zvulun’s direction defies operatic convention to create something powerfully naturalistic.

The most enrapturing performances are from the two leading roles, Rigoletto, sung by baritone Michael Mayes, and his daughter, Gilda, sung by Nadine Sierra. Mayes relishes in malicious mockery during his initial comic scene and descends into a beautifully contrasting pained anguish for the rest of the evening. His shifts from cruel mockery into impassioned love for his daughter and spiteful revenge for her abuse are grand and alluring, and his voice rings with glory, clear and strong in a notoriously difficult baritone role. Sierra is completely stunning as the excited, naïve ingénue, her voice ringing with the grace of a pure and forgiving spirit, the power of a rapturous love, and the tenderness of a guiltless and sacrificial victim. Her “Caro Nome,” one of the most beautiful love arias in all of opera, is one of the very best that I’ve heard. This is a terrifically nuanced aria, filled with an array of complex and tiny vocal flourishes alongside long, slow, and intense phrases, all emerging from the character’s exploding feelings of love. Sierra retains the power of her love in every breathtaking flourish. Again, Zvulun has her perform the simplest touches of graceful movement, clasping herself against a wall as she fills with desire or lying on the ground and slowly raising her arm upon the highest notes of her aria. These graces bring out the feeling of her earnest love and create a scene full of life and passion with such a simple approach.

My only complaint about the production is a slight lacking of energy at the beginning of the evening. It makes sense that opera singers need some time to warm-up into a performance of a full-length, grand opera, but the BLO strives to be a world-class grand opera company and one expects the singers to have full energy from the overture through the finale. Overall though, this glorious new production captures Renaissance spirit with a highly contemporary theatrical sensibility. I hope the best for the production as it moves to Atlanta, GA, and Omaha, NE.