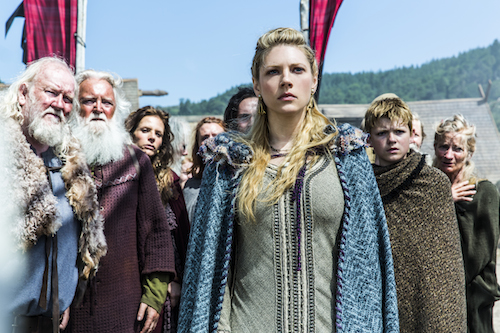 Long at last, Vikings has returned for its second season, and it was most definitely worth the wait. (Major spoilers ahead).

The show opened up almost right where the last season left off, with Ragnar having to deal with his brother Rollo’s betrayal (hence the title). The battle sequence that ensued was amazing and intense. It was incredibly fast paced and brutal. Between wincing at particularly heavy blows and blood spatter, I found myself wondering how they filmed that. It looked (and sounded) fantastic, but it filmed at a fairly close range so I have no idea how they did that without breaking all their cameras. The audio choices helped make the fight that much more intense.

Unfortunately, the conclusion of said awesome battle sequence was slightly anticlimactic because Rollo surrendered rather than fight Ragnar. Rollo has been plotting against Ragnar on and off since Season 1, and probably even before then. It was hard to believe he’s spent years scheming about Ragnar’s downfall only to back out when it was the moment of truth. Rollo is a main character, so I guess they wanted to find a way to keep him on the show, and presumably they have plans for his character, but his decision to surrender stuck out as odd.

The other big problem with this episode is I spent a lot of it wanting to punch Ragnar in the face. Last season, he and Lagertha had a really strong marriage, and he ruined it by impregnating Aslaug, a random princess he met in the woods. He got impatient with Lagertha when she asked him about Aslaug, like she was the one causing trouble. He at least assured Lagertha he didn’t love Aslaug and promised never to see her again. Of course then Aslaug showed up with her baby belly and clearly intended to stay. Ragnar decided to take care of her and their unborn child, and expected Lagertha to support this decision. He even brought up the son she miscarried last season to try to guilt trip her into agreeing to this arrangement.

I really wish Lagertha had taken Katheryn Winnick’s advice. Especially when Ragnar had the gall to suggest a polygamous arrangement between himself, Lagertha and Aslaug. I would like Ragnar to explain how such an arrangement ‘works to the benefit of everyone. Especially the children’. Yes, I’m sure you having two wives is beneficial to ‘everyone’.

The only moment of sympathy I really had for Ragnar was when he bade farewell to Gyda, his daughter who died in Season 1. The moment was slightly tainted when I remembered that while Lagertha was frantically trying to save her daughter/the entire village from plague, Ragar was out impregnating Aslaug. But I can push that to the back of my mind to appreciate how well Travis Fimmel delivered a father’s moving last words to his dead daughter. It was a very quiet and beautifully shot scene. (I keep mentioning it, but this show has gorgeous cinematography).

While I spend most of the episode fuming at Ragnar, he did provide some hilarious facial expressions whenever Aslaug and Lagertha interacted. He looked slightly terrified, as he should have been. Katheryn Winnick was a stand-out this episode as Lagertha, portraying all of Lagertha’s conflicting emotions with dignity. Lagertha is clearly angry and heartbroken, but she kept her composure, for the sake of her her son, and for herself. After Ragnar told her she had to accept Aslaug as a part of their lives, she packed up her clothes and jewelry, and took her ax and sword with her.

Despite Ragnar’s friends telling him, “Your father is Ragnar Lothbrok” (So? His mother is Lagertha Lothbrok.)Bjorn decided to leave with his mother. I wish Siggy had gone with them. I don’t trust her at all, but I did enjoy her and Lagertha’s friendship. I think she would stab Lagertha in the back if she thought she could profit from it, but I also think both women genuinely care about each other, and I wanted to see their relationship develop. Lagertha’s departure might mean she gets less screen time, which would be a shame, but as Lagertha herself said, she had no choice but to go. While she clearly still cares about Ragnar, she respects herself enough to know she deserves better.

Nathan O’Toole also gave a noteworthy performance in what is to be his last episode of Vikings as Bjorn. (There is a time skip coming up, so Bjorn will be played by an older actor). One of the best scenes was when Aslaug tried to bond with Lagertha and Bjorn, and neither of them were having it. O’Toole’s bluntness (“We don’t have a bond. I don’t want any bond with you.”) and precociousness will be missed.

‘Brother’s War’ was a strong start to the second season. When I heard there was going to be a time skip in Season 2, I was nervous because a lot of times, time skips also mean character development skips. I was afraid they would jump three years ahead with no explanation, and expect the audience to just kind of go with it. I should have had more faith. ‘Brother’s War’ tied up the loose ends from Season 1. A lot of the pressing issues were resolved, and it set up the characters and plot for the coming season, which, if ‘Brother’s War’ is any indication, will be a must-see.