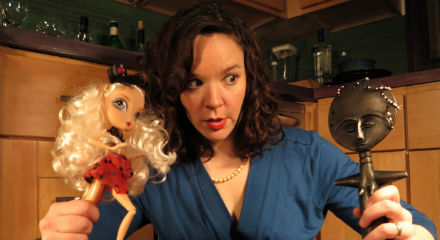 I’m surprised that American theater companies so rarely perform the plays of Roland Schimmelpfennig. Schimmelpfennig (I believe it’s pronounced “sha-ba-da-va-da”) is one of Germany’s most popular and acclaimed contemporary playwrights. His work has seen translation into twenty different languages and companies perform his plays all over Europe, yet he’s so overlooked in America that I had never heard of him before seeing Apollinaire’s American premiere of his Peggy Pickit Sees the Face of God. Not only is this a gripping, poetic piece of drama, but it doesn’t feel translated from a foreign language or culture. I would have believed this to be an American play had I not known it to be German, and if the rest of Schimmelpfennig’s plays are as friendly to American theater audiences’ cultural sensibilities as this play, I can’t imagine why they aren’t getting more stage-time on this side of the Atlantic. Apollinaire has offered an especially high-quality introduction to his work with high-energy performances and visually flowing staging.

Peggy Pickit accounts an evening of a meeting between two middle-aged married couples after six years apart. Carol and Martin (played by Danielle Fauteux Jacques and Mauro Canepa) have been working in Africa, trying to save impoverished people with AIDS, and now visit their old friends, Liz and Frank (played by Becca A. Lewis and David Anderson). We’re told at the opening of the play that things go terribly wrong, and we’re presented with unexpectedly tense, harrowing domestic conflict amidst a difficult debate about the relationship between the first world and post-colonial Africa. Apollinaire advertises the piece as a “post-colonial version of Who’s Afraid of Virginia Woolf,” which sounds like a fine advertisement but actually undervalues its novel form and content, as it does something far more unique than echoing the classic Albee play.

The action of the play is largely gripping thanks to Schimmelpfennig’s distinctive writing style. The central drama is realistic and unified, all taking place in real time in a living room. However, all four characters continually break the fourth wall as the action freezes to give asides and comment on the events of the night out of order. It’s a brilliant mode of foreshadowing, as we wait to see what exactly the characters are talking about, and it’s captivating to have such emphasis on what’s going on in the characters’ heads. It’s an especially helpful technique in that though the drama is realistic; it’s a bit confusing to follow the tragic arc of the evening and follow exactly what is going on as all four characters have complex motivations, on top of secrets, and a polite disposition to hide the truth. The interior monologues let the truth come out more clearly, but, with their non-linear nature and with the characters seeming to jump back and forth in time as thoughts come to them, the play amplifies the chaotic emotional heart of its drama while remaining comprehensible. Schimmelpfennig also employs a unique means of repetition, in which he repeats bits of scenes after aside breaks, often for us to see the scene directed with a different perspective, which again brings out the complex, psychological turmoil behind the polite drama. It’s all a fascinating poetic style, not only because it’s so new and unique, but because the playwright always employs it to hold our attention and to make the central drama more gripping, suspenseful, and tense. Director Megan Sandberg-Zakian takes advantage of these distinctive moments in the script to create brilliant moments of slight restaging that add an additional level of intrigue to the play. Her whole staging is highly picturesque. Sandberg-Zakian has a great sense of visual storytelling and supports the plays entrancing quality with simple but flowing movement.

The actors fill the stage with a permeating sense of their combined tensions and anxieties. There’s a terrific chemistry among the four of them. We get an immediate sense of four formerly best friends who care for each other deeply while holding a lot of emotion. The two couples also evoke their worlds. Liz and Frank have such a put-on, suburban sensibility that’s recognizable without turning into caricatures. Carol and Martin serve as a foil to that, with their pained experience and fragile, exposed demeanor. The most captivating performance comes from Becca A. Lewis as Liz. She begins the play with such an excited, childlike energy supporting her overly-enthusiastic, overcompensating, and desperate attempts at being a good hostess. There’s one hilarious and enthralling scene in which she becomes almost creepily playful with her child’s doll. It’s stunning to watch her de-evolution from this childlike vessel of enthusiasm into the raw and devastated character that she becomes as she faces the revealed truths at the end of the play. Despite all the foreshadowing and pre-revealing of the play’s end, it’s still surprising and captivating the way the cast evolves over the course of the evening.

There was only one moment in the play that didn’t quite work for me, in which Martin goes into a lengthy aside and tells an anecdote of an inspiring story about development in Africa. The moment was a welcome and fascinating diversion from the rest of the story of the play, but the production used some grandiose music to highlight the inspirational element of the story that came off as a bit heavy-handed. The rest of Allyssa Jones’s soundscape, though, was terrifically well-blended with the action of the play, as bits of music in a few sections jarringly yet appropriately added some emotional heaviness.

This was the first show I’ve seen at Apollinaire, and it definitely makes me want to go back to see more of their work. I love their play selection and their focus on contemporary drama with experimental and highly theatrical techniques as in this Schimmelpfennig piece. Not only does it seem a fitting choice for their aesthetic, but also the play’s dialogue of the value and consequences of humanistic activism seem fitting with Apollinaire’s mission of community development through building an arts scene in Chelsea. Maybe another Schimmelpfennig play would be a good choice for the company in the future.