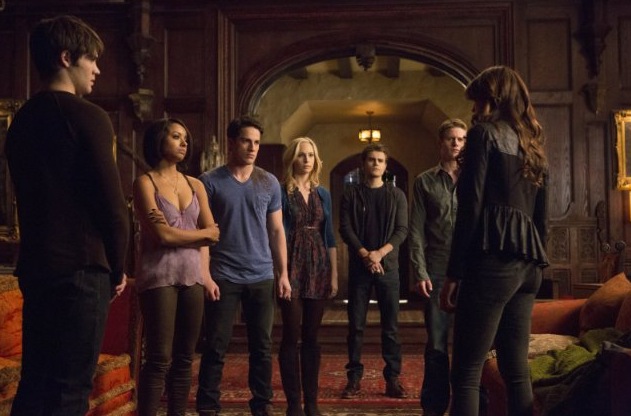 Well, the Kat is out of the bag. The bag here being Elena’s body and the joke being not funny when I have to explain it. But alas, Katherine Pierce is Elena Gilbert no longer. Which is too bad, really, Katherine was always more fun and exciting a character than Elena. Not quite sure how Nina Dobrev pulls off playing an irritating and a fun character simultaneously, but I guess that means she’s a good actress.

In case you missed it, here’s what happened in “Gone Girl”:

Nadia was bit by Tyler and spent all episode remembering the centuries-long search for her mother, Katherine. Katherine spent all episode trying to avoid revealing that she was Katherine. She refused to go to Klaus for his blood cure, so she turned to bad doctor Wes for some daughter saving cure. When he failed to come up with anything, and Damon caught up with him, Damon decided to play doctor by slicing open his eye and probably some other freaky off-screen torture. Jeremy and Bonnie used their new witchy friend to locate Katherine but ended up finding Nadia and using her to get Katherine to come to them. The plan worked, and after Nadia finally turned to stone, the rest of the gang turned on Elena’s doppelganger while Stefan stabbed the Katherine out of her. That is not a euphemism, although it should be. When Katherine finally died, she met Bonnie at the church and explained her diabolical plan. Stefan gave her two choices – run, or see her daughter in her final moments. She knew running was out of the question but because she’s Katherine there was no way she was going out without a fight. She took Dr. Wes’ vile of vampire cannibal blood and stabbed herself with it so that when Elena wakes up, she’ll be hungry for a Salvatore. Again, not a euphemism. The only thing Katherine couldn’t predict is that the higher power she didn’t believe in decided she needed to be swept away, horror movie style.

While it wasn’t an especially fast episode, it did have a lot going on.

Nadia and Katherine are finally (probably) gone. I say probably because I bet that swift exit of Katherine’s is going to come back into play at some point. The writers and fans love her too much (more so than Elena, let’s be real) so I can’t imagine she’ll be gone forever, just for now.

Caroline finally let Tyler have it. So she slept with Klaus. In the choice between Caroline and Klaus, Tyler chose Klaus, so why is she getting so much flak for doing the same?

Bonnie’s still around. Seriously though, I’m trying to find relevance for her at this point, but without her witchy powers she’s been relegated to Jeremy and Matt status i.e., having an arc once every 2 seasons. I really thought when she was in the church with the candles that she’d magically (literally) light them. No lighters, no matches, just magic. (That could totally be a tag line for a movie about Fire Witches. Is there a movie about Fire Witches? It’s cool, I’ll write it.) She needs a new gimic, because for right now, she’s just Elena’s brother/cousin’s (glad they brought that up again) girlfriend.

This episode seemed a lot like one of those episodes that would be a good set up for future episodes. Although, I think I say that about all Vampire Diaries episodes.