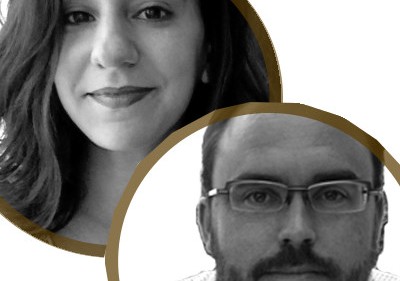 UnSpun Theatre’s ambitious adaptation of Gunter Grass’ epic Holocaust novel The Tin Drum is nominated for three My Theatre Awards this year: Best Director for Chris Hanratty’s clarity of vision and use of space, Best Ensemble for the seven versatile performers who juggled dozens of characters, and Best Production for how effective the sum of those parts (and many others) was.

Co-adapters Chris Hanratty (also the director) and Shira Leuchter (also a key member of the nominated ensemble) join the Nominee Interview Series to tell us about their production from conception to curtain.

Can you remember the first production you saw that made you want to work in theatre?
Shira: My parents took me to see a production of The Treehouse at the Edge of the World by Jim Betts at YPT. I think they took  me to  see a lot of theatre, but I became fairly obsessed with that one. I was a bossy kid, and I remember directing some other kids in a version of it during recess at school. But I don’t think I realized that working in theatre could be a job until much later. At the time I wanted to be an orthodontist because I liked the idea of giving little treats to kids after their appointments.

How did UnSpun Theatre come about?
Chris: UnSpun Theatre was started by myself and Chris Stanton (he created the sound design for The Tin Drum). We met at the University of Alberta and wanted to continue to work together outside of school. After graduation we moved to Toronto and started UnSpun primarily to provide ourselves and other artists with an opportunity to create new work.

What were some of the biggest challenges in getting it set up?
Chris: I think the biggest challenge was learning the ins and outs of producing and theatre administration. This wasn’t stuff we  were taught in school and sort of had to jump in head-first. It was a steep learning curve and, honestly, continues to be a  challenge today, 10 years on. We’re a small company and, like many small companies, the core members are often fulfilling multiple roles – artistic and administrative – and this can be a challenge especially during a production when time is so tight.

Do you have a dream production you’d like to produce down the road?
Shira: We create our own work, and so we don’t always know what the next obsession will be for us – the next thing we can’t stop thinking about and just have to dedicate years of our lives exploring in a performance context. I think we just hope to get better and better at refining our aesthetic, finding clarity in our writing and hitting on stories that spark conversations.

Which directors and actors have had a major influence on you throughout your career?
Shira: There are many, but I think we’d both say Robert Lepage. I’m moved by the way he uses whatever conventions and  approaches he needs to in order to create the piece. He doesn’t adhere to the rules that we might think of in terms of what makes theatre different from film or storytelling or concert. He keeps working and reworking pieces, continually delving deeper, even revisiting work later to see how it has evolved. There’s also a lot of magic in his work, and that’s something we think about a lot  when we’re creating; how can we find room for magic here?

What’s your favourite production you’ve ever worked on?
Shira: I think I’m proudest of The Tin Drum. It was really a marathon, and we were patient with it. It took over six years of  thinking, negotiating and imagining until we ended up with something that finally felt right. To have created and produced such an epic piece for a little theatre company feels like a big accomplishment for me.

Why did you choose to adapt Gunter Grass’ novel? What was it that attracted you to the story?
Shira: I’ve been fairly obsessed with it for years. I read it in 1999, probably, and I couldn’t stop thinking about how well it would  translate on stage. I storyboarded and experimented with some of it back in theatre school (Jesse Dwyre [who went on to play the lead role of Oskar] was a classmate!).  Among the many things that attracted me to it: Oskar’s wry and disturbing voice, not knowing what’s true and what isn’t in the story (and how much that matters), wandering through such a vast swathe of history through the eyes of a child, and the tragedy  and magic of the story, how those two elements are interwoven. I was also drawn to its themes of how much responsibility the  witness to history bears – how are we implicated when we observe our culture’s darkest acts but choose not to become  involved?

What were some of the biggest challenges in adapting the story for a visual medium?
Shira: Finding visual ways to tell the story is really part of the fun, but part of the challenge is doing it simply while still keeping  the magic of the book at the forefront. Our approach is to show the mechanism behind the magic, to watch the actors create the sound and transform the picture, allowing the viewer to watch the creation of the magic as it’s happening. But cutting the vast amounts of text was certainly a priority, telling the story as clearly as possible while still maintaining the quality of Grass’ original  text.

What are some of the biggest changes you made to Grass’ story?
Shira: The shape of the story is really different in our piece. There are huge sections – really important sections – that we just had  to leave out. The entire ending is completely different. We had to create a resolution that made sense with the story parameters that we had set for ourselves. We also combined characters (Hedwig and Gretchen Scheffler, for example) and gave some text to other characters (we gave an important speech that was originally Lankes’ to Roswitha). We started out being really careful with  the text, but at a certain point we had to free ourselves from that, we had to make it our own and take liberties with it. Finding the balance between the original source material and our creation was definitely a continual challenge.

As you were writing, did you always plan for Shira to be in the cast and Chris to direct?
Shira: Yeah, that’s normally how we work at this point: we create together and then Chris directs and I act. I definitely give a fair amount of input into staging ideas but once rehearsals start I have to try and focus on performance. That’s not easy for me! I had started off in my early work on the text with the first scene (Anna and the Wide Skirt) and I really felt attached to that scene, so I  knew I’d continue to play Anna, but the rest of the casting moved around a bit with each workshop or development stage.

How did you approach casting? Did you have an open call or have any other actors in place when you started working on the show?
Shira: We rarely audition. We normally work with actors we know or who have worked with friends and colleagues. It’s incredibly  important for us to know what kind of people we’re bringing into the room. Are they generous? Are they interested in a  collaborative process? There are lots of talented actors but we need to find people that fit with the feeling we like to have in the  room. Scott Clarkson and I had performed in the original workshop back in 2007, Gordon Bolan and Margaret Evans joined us in a workshop we did in 2009, and Courtney, Jesse and Cyrus joined us for this production.

Is the double-casting written into your adaptation or a practical or artistic production choice? How did you decide which characters would share an actor?
Shira: It was written into our adaptation (or at least we always envisioned actors playing multiple roles). The concept was that the orderlies and patients in the mental hospital would help Oskar to bring his stories to life, and they would become characters as necessary, so there was no need to go for realism.

Some of it was simply practical: which characters are never in scenes together? We also wanted to give each actor a primary role, one of the characters who is most influential to Oskar. There’s also a casting component – who would be suitable for which roles? And of course, themes began to emerge from each actor’s track.

Shira, how did you differentiate your many roles?
The style of the piece is fairly presentational, and the characters are very distinct. I was able to build specific physical and vocal choices for each character that were easy to jump into.

Chris, what sort of guidance did you give Jesse Aaron Dwyre in terms of playing that balance of childishness and maturity? Did much trial and error go into determining the pace at which Oskar should grow up?
Jesse and I talked about the balance of the character – how childlike should he be and when. The framing device used in the play, and the novel, is that Oskar is re-telling his life story from a mental hospital at age 30 so there was always a tilt towards maturity running through the character. We also wanted that to come through his drumming – choosing specific moments to be accomplished versus a beginner (albeit a beginner with natural ability)

I think Jesse did an amazing job of playing the balance and jumping in and out of adult and child both with his acting and his musical ability.

Do you have a favourite moment in the production?
Chris: Don’t make me choose between my children.

What are you doing now/ what’s your next project?
Up next is The Speedy, a new work that Harbourfront Centre commissioned from us as part of their Fresh Ground new works  program. It will premiere in May 2014 as part of World Stage. It’s about a ship that sank in Lake Ontario in 1804, and all of the  consequences and complications that brought about. It’s about how we tell stories about our past, how we create our mythology.