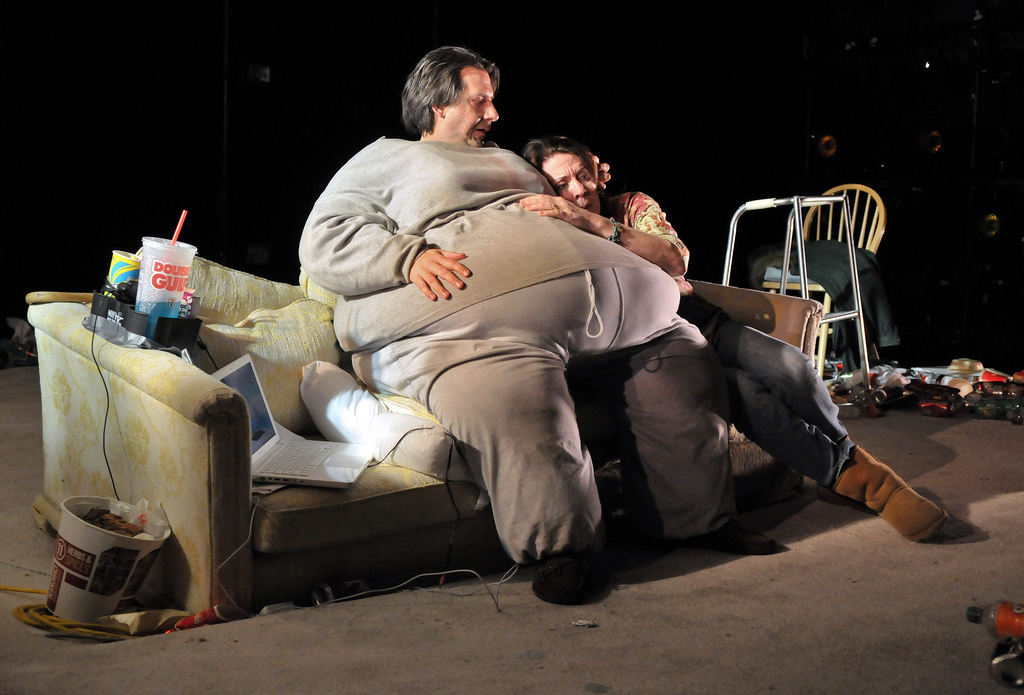 Go see this play. Do it. Buy a ticket right now. People throw around the word “must-see” a lot with new and exciting media, but Speakeasy’s production of Samuel D. Hunter’s latest off-Broadway tour de force, The Whale is something every serious Boston theatergoer should try to see before it closes on April 5. It is a timely and vitally relevant American work about beautifully grotesque human beings who emit profound, necessary empathy amidst their morbid acts of pain.

600-pound gay man Charlie, in an enrapturing performance by the celebrated John Kuntz, has been slowly eating himself to death for years out of grief and only has one week to live. Charlie makes a desperate final attempt to reconnect with his estranged, abrasive daughter Ellie (Josephine Elwood), while also facing his only friend Liz (Georgia Lyman), his ex-wife Mary (Maureen Keillor), and a Mormon missionary bent on saving him (Ryan O’Connor). It’s a difficult premise for a play. This is a story about a man who is grotesque just to look at (and I don’t want to reveal some of the grotesque actions which we see him perform) surrounded by people with such brutal, grating demeanors. Hunter does not write characters with whom you want to grab a cup of coffee. The playwright confronts the reality of a tormented man, a victim of his own selfishness and a victim of the country of gluttony and prejudice in which we live. To a certain extent, the grotesque elements of the play are part of its appeal. There’s a continual sense that we don’t want to see what we’re seeing but it’s so discomforting that we can’t look away.

Cristina Todesco’s set captures the revolting atmosphere of the play. Most productions of The Whale, since its premiere, utilize a realistic set of Charlie’s slightly disheveled apartment. Todesco has opted for something more anti-realistic and symbolic, an off-white floor with a single wall sinking into an absurdly enormous collection of old food wrappers and containers. The minimalist room had an exposed ceiling and underground area, so it all evokes a sense of extreme dramatic exposure, as we look beyond the surface facades of the characters’ lives and experience an urgent, naked confrontation of the skeletal core to their misery. The set dressing of the food containers is a strikingly picturesque arrangement of actual, recognizable brand name food merchandise that brings out the consumerism and commercialism at the heart of the play’s tragedy. My eyes kept fixating on these sub wrappers thrown throughout the set, those terribly ironic “Delicious sub” wrappers that you always get from cheap takeout-pizza places. It’s that false comfort and allure which Charlie gets from obsessive eating that leads him to destroy himself.

Charlie is an intensely demanding role, and John Kuntz gives a breathtaking performance. His voice is ideal, deeply strained and constantly wheezing from the pain and struggle of living in his own body. Yet, his voice is never unpleasant to listen to, as it rings with such compassion and zeal in his trying efforts to form human connections during the final days of his life. The beautiful humanism of the play is that for all the damage he’s done to himself and his loved ones, and for all the torment of his own existence, Charlie retains a glorious sense of optimism for the people around him. All that he has left: his optimism. He always finds the “amazing” in people amidst everyone’s “devastating” life (two words frequently repeated throughout the drama). The character could easily become overly sentimental, but Hunter’s writing is so brutally honest and Kuntz’s performance is so sincere that Charlie does not become an unbelievable Pollyanna but a tribute to a genuinely ever-present sense of human hope amidst an undefeatable struggle.

As I write this review I realize that I’ve fixated a lot on this play as a work about American obesity. The play isn’t really “about” obesity. The playwright has said that the character may as well be killing himself with alcohol as with food, and that the play is more an exploration into a deeper kind of human struggle than a topical study on obesity. And, of course, that’s true. The play moves beyond its display of morbid obesity and becomes a gripping drama of desperate characters, but I get a feeling that Speakeasy is trying to downplay what this show has to display about obesity. Could it be that the company is frightened that the subject matter may put off its audience, that the idea of seeing a gross play about morbid obesity may repulse an audience? Perhaps, part of the brilliance of the play is that, yes, this is a premise many people probably don’t want to see. Our country is so rife with obesity that we don’t even want to face it, and it’s very rare to see fat people in the media as anything but comic relief.

The Whale is discomforting and gross because of that confrontation. It forces us to face a human struggle which we would rather ignore, however lethal that ignorance may be. It is one of the great assets of contemporary theater as a less-than-popular medium that playwrights can create works like this, works with a genuinely artful aim of forcing its audience to confront that which most people repress and let fester. That makes it all the more critical to see The Whale. This is a work of real art, a play with the power to bring its audience to a state of revelation as we witness a devastating American struggle and explore means of confronting it. I hope that, in time, we see The Whale as a great American classic and that it becomes a staple of our theater. But with its difficult subject matter and the great technical demand of creating a 600-pound character, this production may be your only chance to see it for a while.

The Whale at SpeakEasy Stage Company runs through April 5 at the Boston Center for the Arts, 527 Tremont St in the South End. For tickets, visit www.SpeakEasyStage.com or call 617.933.8600.