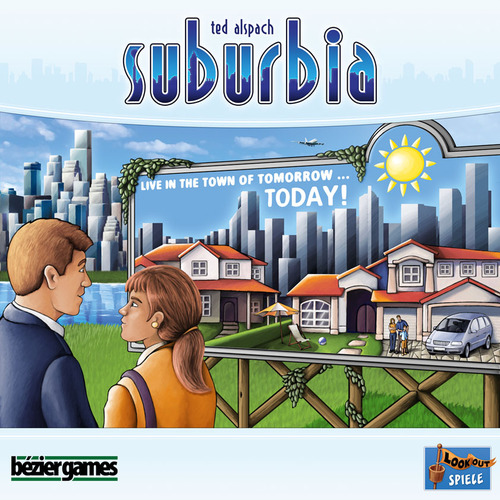 Build Your Own Suburbia

So one of the casualties of my new-found fatherhood has been my ability to easily round folks up to play games. People tend to like to congregate in the evening right around the time babies insist on going to bed. To make matters worse, I now have all this extra free time to read about games, watch game reviews, and to yearn for that which I cannot have. All of which means I’ve had to get creative.

I learned about Suburbia from Shut Up and Sit Down and had a chance to play about 2/3rds of a game a while back at a board game meet up and it really piqued my interest. I liked the simple look and feel of it, the sense of creating something, and also my own basic civic mindedness. Playing the board game, I was happy to have my instincts proved correct as I built up little Leemansauga but I was still faced with the problem of trying to find time and people to play with.

Luckily, Apple came to my rescue and much like they’ve done with a whole host of games, they offered a version I can play on my iPad. I have since played over a dozen games and I have been even more pleased.

In the game, you are attempting to build up your own unique borough of a city by purchasing housing units, stores, factories, schools, or planting parks and filling up lakes. Each of these districts is represented by a hexagonal tile you plop down somewhere next to existing tiles. The tiles all interact so each round you have to not only decide what you want but where you want it and watch as your little slice of the city becomes more or less desirable or fiscally solvent.

Do you want to plop the shopping complex right next to all the residences, make sure it’s by the highway, or use it as a nice shield from the polluting factories. Maybe you’re running out of money and plopping down a nice lake to increase property values will be the key to creating a little piece of heaven. As you make these choices, little sliders keep moving up and down to represent your income and also how many people move into or out of your borough. At the end of the game, players compare population and whoever has the most wins.

This game works remarkably well on the iPad because calculating those sliders is probably the slowest part of playing the tabletop version but the soulless computer works it all out in the blink of an eye. It’s turn-based so there’s no twitch factor to worry about. Also, each game there will be various goals which give you bonus population so working towards them makes each game feel very different when you’re playing game after game trying to rock your wee one to sleep.The iPad version comes with online multiplayer but also with a hotseat version where one player can take their turn and then pass the iPad to the next player. There are also computer opponents to play against, each with different methods and strategies. The most frustrating part of the game is the Campaign mode where you will be given a specific goal (reach a population, get so much money, connect all your tiles, etc), a handicap, and a time limit in which to achieve it. While they certainly test your skill, even on Easy they are incredibly difficult and not as rewarding as a simple regular game against the computer opponents.I recommend this game, both the board and iPad version especially for folks who’d like a somewhat paired-down SimCity experience with fewer flash floods and road maintenance.

Available in board game version and iPad version.