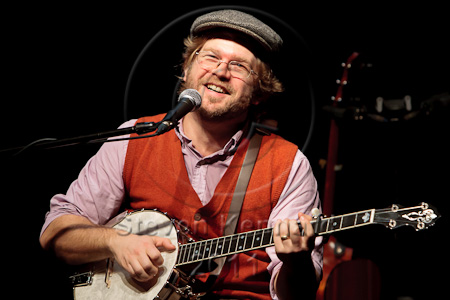 “Who feels like a little call-and-response?” calls Chris Luedecke, AKA Old Man Luedecke, of Halifax. There is a halfhearted smattering of applause. “That’s ok,” he deadpans, “if I was holding out for a majority I would have given-up a long time ago. Banjo! The most universally hated of all instruments! Okay, here we go.”

The two-time Juno winner is performing to a packed house in perhaps the last true dinner theatre in Toronto. A clamshell of tables surround the stage, and from where I stand, by the bar at the back of the room, all eyes are on Luedecke. This rapt attention gives the room a sense of reverence, though this is perhaps misplaced given the nature of the performance. A woman angrily shushes two men chatting quietly by the bar and I can’t help but think about just how far we are from Carnegie Hall. A hoot or two would go a long way.

That said, Luedecke is a magnetic performer, confident and capable, and the crowd is gradually warmed (if not driven to transports of delight). His frailing technique lends excellent texture to his songs, and he is ably backed by two band-mates on a revolving instrumentation that extends to mandolin, fiddle, and bowed bass. He is also more dapper than I imagined: clean-shaven and clad in a vibrant pink shirt under a blazer, he looks for all the world like an eccentric substitute teacher. Which I suppose he is.

Luedecke’s music is lilting and uplifting, as is his banter between the songs. He jokes about his lost nightlife (he is a father to three young girls), admitting that most of his social outings now take place at Farmers’ Markets (“they’re like nightclubs for people who have kids!”). He asks if we would prefer to hear the clean version, or the dirty, of the leading track from his new LP. “Dirty!” we shout. “Just as well,” he says, “the tune’s called ‘We’d Be Fuckin’ Rich’. There’s really no clean version.”

Humourous ditties like this one, like ‘Monsanto Jones’ and like fan favourite ‘Machu Picchu’ find Luedecke squarely in the Can-Con canon alongside the likes of the Barenaked Ladies. Like the Barenaked Ladies, however, Luedecke is at his best when he is at his most serious, and his breaks into sentimental balladry are unimpeachably pure and honest. His cover of Leonard Cohen’s ‘Closing Time’ is a show-stopper. But he quickly returns to his lighthearted repertoire shortly thereafter, freight-train rumblers that ultimately speak to esoteric quirks, humanizing and humble.

I’m of two minds about this: on one hand, I tend to disdain music that tries to be glib, or worse, cute—and much of Luedecke’s catalogue fits this description. On the other,these are the songs that are true patchwork compositions, staggering in their execution. Allusion to Robert Service or Allen Ginsberg slips between Randy Bachman jokes, rhythm and cadence straight out of a Django Reinhardt rag jostle for position with knowing reference to modern trappings, like headphones, like cell phones, like digital watches. At first, these intrusions pain me. But as the show progresses, I begin to enjoy them.

And here is why: in a world where folk music seems incapable of liberation from itself, Luedecke fearlessly writes about the shit that matters to him. Where some other performers of similarly wooden music seem contractually obliged to experience life in a haze of sepia tones and tweed vests, Luedecke writes about the shit that matters to him. He doesn’t profess to sleep in box-cars, or write letters sealed in wax; he talks openly about the digital world and the speed with which it has bolstered his career. (“I wrote that song three weeks ago and now the lyrics are on a fuckin’ t-shirt! How crazy is that!”) His songs are good, and his execution laudable, but what stands out in my mind about this quiet little show on a Tuesday night is that Luedecke seems genuinely thrilled to write music that appeals to him rather than pander to archetypes of what the public perceives his genre to be.