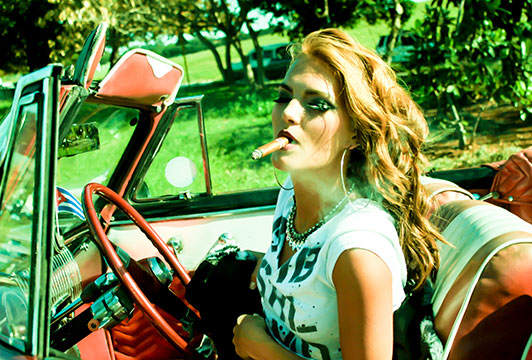 I find I’m liking the latest video/single from Edmonton-based BMSHL. BMSHL is songwriter and producer Brenna MacQuarrie and the video was shot on the beach and in the tropical scenery of Cuba with Brenda as the main feature in a series of natural settings. From a media release:

“We chose to do the majority of the filming in Cuba because of the weathered architecture, old classic cars, and rich history – Old Havana, specifically, was a huge draw,” MacQuarrie explains, “being in that city feels like traveling back in time. We also knew that the video treatment for ‘Recover’ required both an ocean and jungle scene, which we were able to film very close to where we stayed.”

The song is a moody, downtempo ode to lost love and sad survival and showcases her strongly melodic pipes above layers of electronica. The overall effect is lush and romantic both sonically and visually, fusing the timeless quality of the melody into a very contemporary musical treatment.

Jay Sparrow directed the video, along with Holden Daniels as cinematographer and editor.