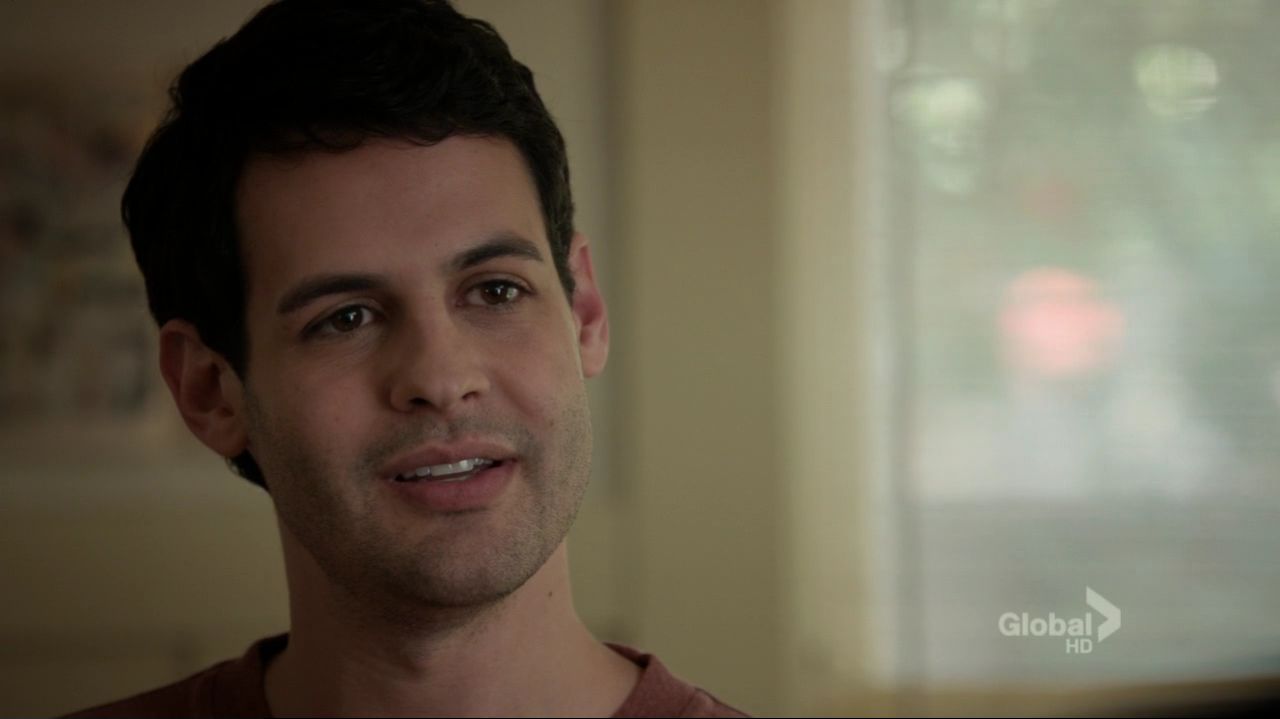 Andrew Leeds tortured my friend Tessa. Not literally- he’s actually a perfectly nice fellow it seems- but when Christopher Pelant (the hacker-genius/psychopathic game-player/serial killer who bears his face), *spoiler alert* forced Booth to reject Brennan’s marriage proposal, Tessa and all my Bones-loving friends were Devastated. How Dare He!

Even more than The Gravedigger who memorably buried our heroine and her far-more-loveable colleague Hodgins alive in season 2, Pelant is The villain of the FOX drama’s run so far and its Andrew Leeds’ eerily calm performance in the role that makes him so memorable. He’s thus one of our  Best Guest Actor nominees this year. Read on to hear what he has to say about being the only Big Bad to stay ten steps ahead of the smartest squints on the block.

When did you know you wanted to be an actor?
When I was three years old I was very shy. I used to hide behind my mom’s leg. And so she put me in a singing group at the local community center and I loved it. The people who ran the group were amazing and taught me so much. And I got really into theater. And at the age of seven I got very lucky. A Broadway show came to Florida, where I’m from, to do a pre-Broadway tryout. I was cast as the understudy for the Florida run. When they were about to go to New York I asked the producer if I could go with them and she said yes! So we went to New York and eventually I took over the role.

What was your first big role?
My first big role was playing Gavroche in the national tour of Les Miserables. My first substantial role on television was on the show Nip/Tuck.

When you first started the role of Christopher Pelant on Bones, did you have any idea how important to the series he would become?
Pelant was one of the great surprises of my life. When I auditioned it was only supposed to be one or two episodes. And then the character lasted for three seasons. People really seem to love the show so it’s been a great privilege to get to be a part of it.

Pelant is the one person to ever out-smart Brennan. Spending so much time with the character, did ever start to get a sense of what he might do next?
Whenever we would shoot an episode I would inevitably have to do something that was unexplained. An example of this would be when I switched out Booth’s alarm clock. So part of the fun was always trying to come up with a theory as to why I was doing these things. But I can’t honestly say I was able to predict what Pelant was going to do next.

Did you ever struggle playing such a dark character? Was it easier to attempt to humanize and understand him or distance yourself and just enjoy playing the villain?
I never really thought of him as being dark. He took so much pleasure in being so brilliant. He loved being one step ahead of everyone. He took so much pride in it. So, in a way, Pelant always felt light to me. I suppose on the dark side of things, he was deeply sad and lonely. And really he just wanted to connect with someone. And the closest he ever came to that was with Brennan who he felt intellectually connected to.

In his final episodes, it becomes clear that Pelant’s motivation is his love (if you can call it that) for Brennan. Was that something that was there from the beginning or did it develop as the character kept reappearing over the years?
I think that developed over the years. Originally I think Pelant was wreaking havoc because he thought he was doing what was best for the world. But as he came to know Brennan, he started to fall in love.

He comes seriously close to dying a couple times (at one point getting shot and stitching up his own face!). How often were you worried that you’d been killed off?
Basically every time I got a new script I was worried that it was the end for me. I used to just skip to the end of the episode before reading it so I could see if I was still breathing. When we got to season 8, I knew I’d be doing at least three episodes so there was some security there. But I certainly never imagined I’d make it into season 9. Like I said, I feel very lucky that I got to play Pelant for so long.

Would you be all that surprised if it turns out he’s somehow not really dead?
Nothing would really surprise me. The writers are always coming up with ideas that catch me off-guard. But that might just be wishful thinking.

When the show finally comes to an end, Pelant will likely still be considered the biggest villain the characters faced. Are you comfortable with that legacy?
I would be thrilled if Pelant were considered that. I would love that. That would be quite the compliment.

Do people ever yell at you on the street about keeping Booth & Brennan from getting married? Or, you know, for killing people?
You would think that people would yell at me, but the response is always one of enthusiasm. If you read any of the message boards there’s certainly a lot of hatred for me. But on the street, people are always incredibly lovely. It’s really rewarding being on a show that people seem to love so much.

What are you working on now?
I’ve been working on some other television shows. Recently I shot a bunch of episodes of NCIS: LA. I also worked on some new shows: Mixology and Bad Teacher. And I’ve been doing a bit of writing as well.