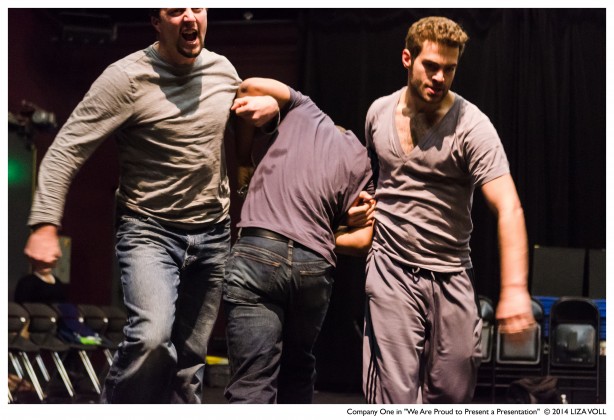 There’ve been a lot of plays about race in Boston over the past couple of years. We had Lydia Diamond’s Stickfly and Kirsten Greenidge’s Luck of the Irish moving to Broadway and off-Broadway, respectively; last spring’s acclaimed production of Clybourne Park and the powerful The Color Purple at Speakeasy; and a host of race-themed plays at the Huntington, leading up to its revival of A Raisin in the Sun last year. These plays seem to be striking a chord with many local companies and their audiences. And perhaps no one in town is as driven to produce race-related work as Company One (C1), whose mission is to confront directly the community diversity of Boston through civically-engaging theater. Their recent co-production with ArtsEmerson is another entry into the recent surge of race plays in Boston. But this production, with its unique and heavy use of meta-theatre, offers some fresh perspectives on race that are perhaps even more engaging than any play I’ve seen recently.

The play begins with an introduction by the actress claiming to be a sort of headperson-in-charge of the process, simply named “Black Woman,” played by Elle Borders. She speaks and introduces the rest of the cast, a black man, played by Brandon Green; a white man, played by Jesse James Wood; another black man, played by Marc Pierre; another white man, played by Joseph Kidawski; and a white woman later named “Sarah,” played by Lorne Batman. The entire cast spends the evening exhibiting universally solid vocal and physical technique and genuinely connecting with one another. Almost immediately after the introduction starts, Borders fends off an interruption by the Batman. At this early moment in the play, the realism breaks down as Borders is a bit recited. It’s obvious that the moment is staged and Borders is acting. At first, this moment took me out of the play, as I thought the actor had upset the play’s believability and hurt a dramatic illusion. But whether or not that instance of obvious acting is intentional, it introduces the fascinating meta-theatrical effect that dominates the entire evening. After a brief historical overview of the genocide of the Herero, the company spends the rest of the night struggling to reenact the genocide as they continually break out of their various historical characters and engage amongst themselves as actor-playwrights. It’s fascinating in that we all know the actors aren’t really struggling, that this is all pre-arranged dialogue, a written drama presumably by a group of artists collaboratively accounting their pains in creating their art. And, since we all know that they’re acting, the character-breaking adds a layer of self-awareness and self-criticism to the process itself, the play becoming a transparently-created work about the nature of creation.

Now, it’s all well and good to have a piece of meta-theatre that’s self-aware for the purpose of discussing art. And We are Proud to Present a Presentation . . . does do this to a certain degree. The actors talk about their process, they mock their own diva complexes, and they spend some time discussing the value of what they are doing in the first place. But this meta-theatre has been played before. Where the use of meta-theatre in We are Proud to Present a Presentation  . . .  proves valuable is in its application to this particular account of the genocide of the Herero. Early in the production, the play reveals that no firsthand accounts of the Herero people survive and that to tell their story the company must rely largely on letters from white German soldiers to their love interests. It’s an obviously frustrating position, only having access to white accounts of the genocide of Africans, which raises debate about living with a history written primarily by white people and brings up the question of why the Herero genocide has been largely forgotten. Is it because such little historical documentation survives, or that history is written with a white eye? In any case, the presentation about the Herero that this company tries to present becomes an impossible play to create, and the self-aware discourse on their own project becomes the only means of which they can valuably dramatize the story. So, the play necessarily becomes a drama about storytelling, and a fierce, high-stakes drama it is.

As the company argues over a race-driven genocide, they also argue about broader issues behind racism, their own experiences with race, and the roles of black and white artists in creating works about race. The actor drama behind the reenactment of the genocide’s events becomes a race war of ideas. At once, it is an extension of meta-theatre that I’ve never seen, as the self-awareness transcends from functioning as a means of comment on the nature of art into a necessary means of the employment of storytelling and a vehicle for creating a broader, socially relevant drama of its own artists beyond its central plot. There are layers of modes of drama here, kept fluid, coherent, and strung together by the interconnected notion of a single dramatic structure.

The most valuable part of utilizing this dramatic structure to tell the story is that the artists’ struggles are so relatable. Artists design contemporary theater, especially in places like Boston, largely for an audience of other local theater artists. This play becomes a sort of actors’ venting point to discuss and experience head-on the sorts of conversations we’ve been having in our theater scene for years.

What’s effective about this mode of discussion, aside from the given appeal to an audience of theater workers, is just how extraverted the actor-playwrights are in this show. One of the greatest problems behind the American race discussion is our own fear of having any frank conversation about race in the first place. I’m reminded of Clybourne Park and its comedy-of-manners approach to the American race discussion, displaying a world in which most of the confusion of the drama erupts from polite discomfort, a discomfort of everyone beating around the bush in regards to racial issues until they all burst forth with pent-up anger. Most dramas about race embody this dialogue problem, accurately reflecting the American inability to have a meaningful discussion about race as we plunge into polite refusal to discuss. And how are we supposed to confront race issues in America if we’re so afraid of the topic that we can’t engage with it directly and honestly, in real life or in dramatic worlds? Well, here is a new form of discussion. The actor-playwrights in “We are Proud to Present a Presentation…” are so extroverted, as their craft dictates them to be, and so motivated by the emotional power of the work they do that their discussions about race are full-throttle and unapologetic. Everyone in the play, black and white, eventually reveals exactly how he or she feels about the issues at hand, at the risk of his or her own committing an act of racism, an inadvertent personal attack, or an embarrassing illogical claim. The discourse is raw, vivid, confrontational, and willing to offend, if necessary.

This extroverted discourse all flows back into the drama, supporting the actors as they connect so viscerally with each other. After one scene when one of the white actors reveals a troubling story about his grandfather’s wartime experience with a black soldier, one of the black actors becomes disturbed and upset.  The drama is so personal, and everything seems to be autobiographical, so we get a sense that the inter-actor drama is especially real. The feeling of genuine pain from the actual actors emerges more and more greatly as the night continues, and the actors more intensely root their scenes in an intense, earnest emotional connection. The only problem with the drama becoming purposefully better acted as the night goes on is that occasionally, after a particularly good scene, the black woman character will stop the action and comment on how good everyone just was. These few moments of self-congratulation lack humility and distract from the drama. This isn’t like one of the moments where the play makes fun of its actors’ diva complexes; here, it just seems like actors patting themselves on the back. That the scenes preceding the self-congratulation often actually are quite good almost makes it worse. Their quality speaks for itself and it doesn’t help to tell the audience that we’ve just seen something that’s good. But aside from this bit of distracting hubris, the emotional quality of the performances build up to a gripping finale in which everyone pushes him or herself to an extreme confrontation of his or her role in racial interaction.

Perhaps the most impactful moment of the entire performance is after the play is over and the audience goes for a lobby chat with some behind-the-scenes workers at ArtsEmerson and C1. Here, we all receive programs for the first time and learn from an announcement that what we’ve just seen was not a piece of devised theater at all, but a scripted play by Jackie Sibblies Drury in disguise as a devised work. This reveal of an additional level of meta-theatre, that what we just saw was a sort of brilliant artistic lie, makes the entire production all the more impressive. I do not feel manipulated by the production, merely impressed that the actors were so able to maintain the illusion of being genuine actor-playwrights. It brings an additional level of revelation to discourse on the power of drama. If drama can be so effective so that one can believe such a grand lie, what else can it do? If a play can so easily convince us of the nature of its own creation, what power does theater have to convince us what we believe? How can we be so sure what we take from the theater is truth and what is imagination? This was an almost terrifying post-show moment, and it makes me wonder whether We are Proud to Present a Presentation . . .  could have a power over me for which I am not even able to comprehend.