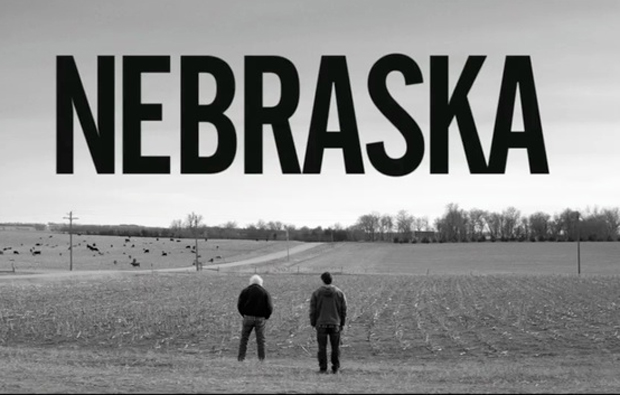 Nebraska is a slow, quiet movie that revolves around a slow, quiet man. Bruce Dern plays Woody Grant, a confused old man convinced that he has won a million dollars because of a piece of junk mail he’s received. His son David, played by Will Forte, in an attempt to keep his dad from running away, and partly due to the boring state of his life, decides to take Woody to Lincoln, Nebraska to prove to him that his prize is a fraud. Along the way, Woody and David take some detours as an excuse to spend time together, and attend a family reunion in Woody’s hometown of Hawthorne, where the bulk of the movie transpires.

Nebraska places heavy emphasis on realism and atmosphere, utilizing several key artistic devices to convey these features to the audience. The most prominent stylistic choice was having the movie shot in black and white. By removing the colour, the frame ends up less “noisy” and certain key features stand out: the near-desolate nature of Hawthorne and Dern’s aged portrayal of Woody are strongly emphasized through the sharp contrast of black and white. In fact, the use of black and white over strongly scripted characters often makes this feel like a version of The Last Picture Show where all the kids have grown up.

Director Alexander Payne employs a decidedly “old-school” style of filmmaking. His use of longer cuts and medium shots help to foreground the strong performances. He even throws in some weird, out-of-vogue techniques like the classic wipe and extended fades to slow down the speed of scene transitions. This is all set to a quiet, folk-y score that matches the mood of the film. Payne consciously makes an effort to match the pacing of the film to Woody’s actual pace. Woody, a slow, old man, is reflected by a film that moves slow and feels old.

It feels like Payne is striving to be as real and naturalistic as possible. Filmmaking techniques aside, he truly accomplishes this feat through his choice of actors and their incredibly low-key performances. It’s quite striking that, even though some of the actors are well-known, nobody looks or feels like a Hollywood superstar. No characters are overly pretty or handsome, and some, like the wrinkled and disheveled Woody, or Stacy Keach as the beaten-up old antagonist, have a true ugliness to them. The naturalistic casting makes us feel like we are looking at real people, and through this the viewer becomes more invested in the truth of the performances.

Dern’s performance stands out the most. His representation of a confused old alcoholic, bordering on dementia, is so pitch-perfect that it’ll be hard for many to separate the actor from the character. He is complemented by Will Forte, who breaks from his typically cartoonish performances to truly inhabit an impish and introspective man.

These two, along with the characters they interact with in Hawthorne, fill up the bulk of the film with small talk and forced, awkward conversations. Seeing such mundane day-to-day conversations committed to film in such a realistic manner often becomes so surreal that it ends up being hilarious. One scene in particular, where a bunch of old men sit around quietly talking about what cars they are driving, features no actual jokes, but truly hits home hard and had the audience laughing hysterically.

David, and to a point his brother Ross (Bob Odenkirk), are able to gain a deeper understanding of their parents through the lens of harsh reality scrutinizing the people of Hawthorne. This is ultimately necessary because Woody remains an incredibly difficult person to talk and relate to throughout the film. Their mother, Kate (June Squibb), does not fare much better, as her abrasive manner makes her come off as a mean and uncaring person. But, by contrasting them against the bleakness of Hawthorne and some of its truly cruel characters, their father proves to be a caring provider, and their mother’s behaviour is really born out of protectiveness.

What really sold me on this film is how personally realistic it feels. It feels incredibly real on its own, but it really hit home, as both the settings and the people of Nebraska are near reflections of my home of Chatham-Kent: the empty and flat fields, old broken houses, restaurants playing country music and streets bordered exclusively by dive bars and shut down stores. Definitely eerily-familiar sights. The people and the things they talk about also felt a little too close to home. Considering that Hawthorne, like Chatham, is a place primarily populated by older people, I’m used to hearing conversations filled with references to old and dead friends and what’s become of them.

Nebraska is truly a triumph of realism, performance and dialogue. I haven’t seen a film able to come off as feeling this natural and honest in quite some time. It’s nice to see Alexander Payne not only making another effective character piece, but also one that employs such classic and under-utilized film techniques, not often seen in modern cinema. At the very least, witnessing Bruce Dern’s Oscar-worthy and mesmerizing performance is worth the price of admission. While I know that some won’t be able to tolerate the pace of the film, it is honest, truly funny and full of heart which definitely makes it worthwhile viewing.