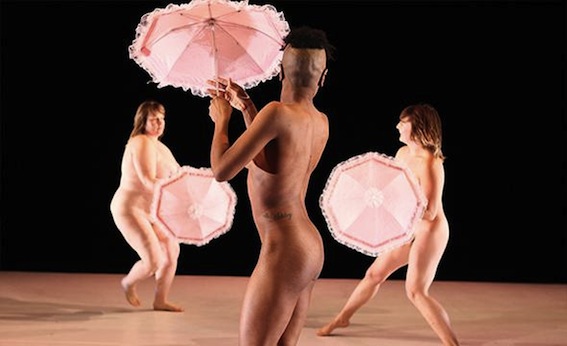 The Untitled Feminist Show, by Young Jean Lee, is an hour of beautiful and thought-provoking movement. It’s an eclectic mixture of elements sifted together so that trying to pull it apart into its constituent elements feels wrong, especially given the smoothness – or even gentleness – of the staged transitions. The music ranges from electro-pop to house to funky rock and includes long silent or a cappella sections. The movement is equally diverse and can be just as strong as it is meek and timid; just as violent as it is docile and smooth; just as vivacious and happy as deadly slow.

The performers were intent on showing how remarkable even the most mundane, repeated actions can be while also demonstrating how amazing the human body is for expressing emotion, stresses and strength. They did a terrific job. To a person, the cast was spirited and versatile. They were able to switch gears quickly enough to stay with the rapidly shifting music and were totally convincing, whether giving mimed blowjobs to unsettled audience members or singing a pattern of “la”s on-strage, alone, for two or three minutes. The defining characteristic of this talented group of performers was commitment to the show and, consequently, the entire work felt warm and welcoming. I suppose one of the most obvious signs that the cast was committed to the show and its message was the fact that all six of the performers were naked for its duration.

In fact, if The Untitled Feminist Show was to have a title, it might be something like “Feminism as Demonstrated by The Incredible Female Body.” So much of the show is remarkable because of its nudity and yet, very quickly the show exceeds the mere fact that its performers are naked. There is a duality present in the show. Some of the time, the performers and Lee emphasize the fact that we’re looking at naked female bodies with choreographed, simultaneous leg-spreading, or otherwise completely spontaneous shaking – vibrating might be more accurate. Seeing the performers revel in their vigorous movement looked like fun, but surely was designed to recall the audience to the fact that, yes, we were looking at naked women. And certainly, the several moments of direct vaginal exposure were meant to call attention to the fact that we’re talking about women, here. At the same time, the show makes successful efforts to set the scene for love, comedy and tragedy alike where the overt nudity fades to the background of the emotional vignette. The show never decides whether or not it is fixated on the female body or – in a kind of challenge – that the feminism for which the show aims is detached from the body on display.

All in all, the show is inspiring and transmits the message that feminism, rooted in the delights and singularities of the female body, can be many different things, to many different people and can be many different things to one person. Seeing the same actor pirouette with grace and languid limbs contort into breast-shaking, knee-quaking spasms is thrilling and interesting. It seemed to me that some of the more palpable divisions in the show were done with purpose, as if Lee was saying, “see? Women are strong and beautiful and submissive and smart and… all at once!” And still some of them seemed to be because they showcased the performers having lots of fun with their bodies – which they certainly did. That said, some of the explicit displays of the female body shaking got a little stale over the course of the show.

Apart from the odd misstep in choreography to distract me, I found myself pondering how I was supposed to be watching the show. However I was doing it, I was sure I was wrong. When I caught myself impressed and carried away with the performers on-stage, I reprimanded myself for not considering the “message” of the particular scene. When I was immersed in details of the philosophy that might have informed a given moment, I chided myself for not just watching and listening as the performers showcased their incredible talents in dance. The Untitled Feminist Show kept me off-balance. I was never too sure whether I was supposed to be turned on or repulsed or entertained. And perhaps, as a mid-twenties white dude, that’s part of the deal; the feminism that the show pitches just isn’t for me. Holding that thought together, with the thought of the beautiful work to which I’d been exposed last night – which was surely for me – had me thinking all the way home and has had me thinking all day today. I’m holding out hope that the feminism Lee and her company represent is based in a strong awareness that women and their bodies are multi-talented and self-actualizing, beautiful and determined – even and especially as they relate to each other and to my own male self. Because otherwise, I’ll just have seen an awesome play, full of naked ladies that I don’t understand.