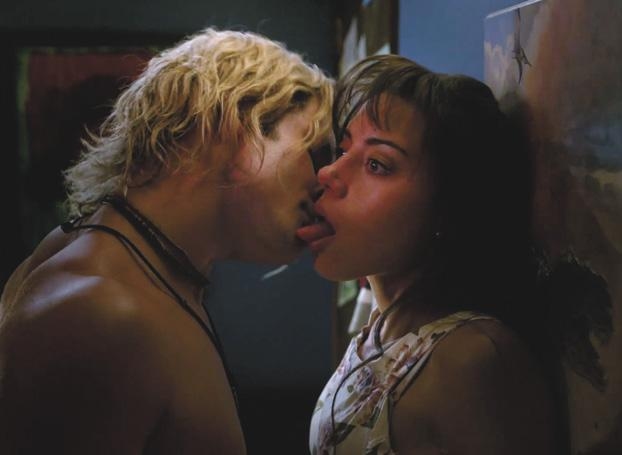 Of late, I’ve noted a growing trend of studios releasing successful female-driven comedies. Films like ensemble comedy Bridesmaids, buddy cop comedy The Heat, and coming of age comedy For A Good Time, Call, have turned out to be fine investments of valuable viewing time. The To Do List, released mid-2013, is one of the latest in this welcome trend, and gives a feminine perspective on the archetypal ‘losing your virginity comedy’.

Brandy Klark (Aubrey Plaza), a nerdy perfectionist, is just finishing high school. Following a brief sexual encounter at a graduation party, Brandy realizes that she has absolutely no knowledge or experience in the daunting world of sex. Taking inspiration from her friends (who include Arrested Development‘s Alia Shawkat, employing her usual Maeby snark), who tell her that she needs to gain more life experience, she vows to have sex with local hunk Rusty Waters. But, to build her way up to performing the ultimate dirty deed with him, she, in her usual valedictory fashion, creates an organized list of sexual deeds that she must perform before ultimately losing her virginity.

What follows is a comedy that, while simple and not especially groundbreaking, generates a lot of laughs and thankfully never runs short on funny dialogue. A lot of the best lines are given to director Maggie Carey’s husband, Bill Hader. Hader plays Willy, Brandy’s loser boss at the local pool. Following the laws of other loss-of-virginity films like American Pie, The To Do List mines many of its laughs from the well of gross-out humour, one scene taking particular inspiration from the comedy classic Caddyshack.

This film certainly does not lack in comedic talent. Much of Brandy’s list is consummated through encounters with comedy MVPs like Andy Samberg, Christopher Mintz-Plasse and Donald Glover, making a lot of the items on her list feel like separate vignettes that are stand-alone funny.

Plaza’s performance is the central driving force of much of the humour; while she radiates her usual quirky-girl vibe, she also has this hilarious, naive sort of awe whenever she learns something new. In most of her sexual encounters, she examines the new things she’s experiencing in the same way you’d expect an alien would. Her reaction at the end of a scene in a movie theatre had me in stitches… I won’t say too much other than it involves a lot of popcorn butter. I love a film that affects a retro vibe, and this movie is full of 90’s iconography: VCRs, colourful clothes, see-through corded telephones (remember those?), and a summer spent at the local pool add a perfect extra layer to this film.

While it tends to get a little tied up with the typical ‘nice guy versus hot jerk’ plot, The To Do List avoids focusing too much on heavy-handed relationship morals typically found in teen sex comedies and, instead, puts a big emphasis on sticking with your friends. The film also gets extra credit for giving this tired and male-dominated genre the twist of having a female perspective. While ‘first-time’ comedies have been led by women before- Sixteen Candles being probably the best example- I don’t know of any where the main plot features the lead actress simply trying to get laid.

The To Do List is a cute movie that has big laughs and a lot of heart, as well as a heaping helping of filthy jokes. Thanks to its ingenuity and unique perspective, the film had myself and a group of friends laughing from titles to credits. Definitely worth a watch.