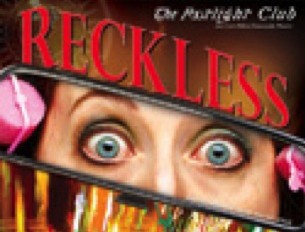 Reckless Hilarity at the Footlight Club

The Footlight Club started the New Year on the right foot with their January/February production of Craig Lucas’s brisk dark comedy, Reckless. The story revolves around Rachel Fitsimmons (Jenn Bean), a cheerful, talkative housewife who finds herself on the run on Christmas Eve, forced to live various new lives after being informed by her husband Tom (Travis Rand), that he has taken out a contract on her life. Her flight causes her to cross paths with a man named Lloyd (Jason Tennis) and his girlfriend Pooty (Audrey Stuck-Girard); hilarity, homelessness, chaos, a game show, fraud, murder, and more fleeing quickly ensue. Reckless is a wacky show with deep emotional resonance, and this production made the many, many funny moments pop. It managed to keep the inherent weirdness of the play while simultaneously infusing it with a strange realness and very real warmth.

Bean and Stuck-Girard completely stole this show. Bean embodied all of Rachel’s nervous vocal tics and verbal slips, and she did so while offering wonderfully wide-eyed looks, fits, and starts. While she managed to hit all of the funny twists and turns and kept great pace during her many lengthy monologues, it was Stuck-Girard that had me absolutely mesmerized. Her Pooty signed, mugged, and (spoiler alert) died hilariously; her various incarnations as Rachel’s multiple therapists were each distinctly voiced and personified (no mean feat), and each was more outrageous than the last. These two women had me in stiches the entire performance.

Tennis’ Lloyd was a nice balm to Rachel and Pooty’s antics, conveying a quiet energy without ever being dull. I’m afraid I can’t say the same of Rand’s Tom; he was the only real weak link in the show, pausing too generously between lines, dropping the comic rhythm set up by the others. However, the hesitancy and gentleness that made for an uninteresting murderous husband worked much better in Rand’s benign incarnation of Tom Jr.

This staging was quite economical, which made the constant scene changes flow smoothly and efficiently. Judicious use of lights, an uncluttered set, and a well-timed tech crew achieved the unique sense of each scene quite nicely; I especially commend the staging of the car scenes (dimmed lights, quiet sounds, two chairs, and a steering wheel; so simple!) and the game and talk show, though I sincerely hope the microphone bugs that were present during the game show on opening night were smoothed out by the second performance. All in all, the Footlight Club presents a refreshing theatrical tonic in the wake of our holiday hangover, and a much better alternative to accepting strange bottles of champagne left on our porches.