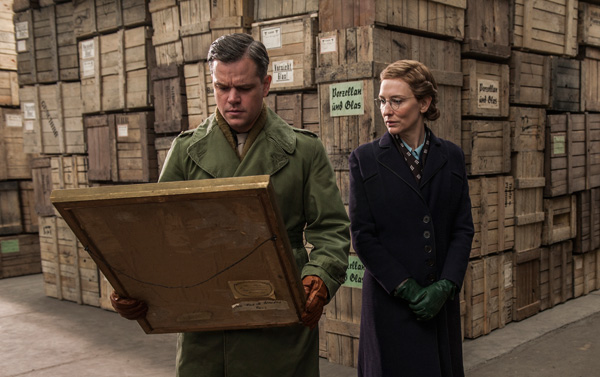 Despite having the deadly combination of an inspiring true story and a remarkable cast, The Monuments Men has that all-too-familiar feel of a Hallmark movie-of-the-week. George Clooney stars, directs, and co-writes the film, with writing partner Grant Heslov (The Ides of March; Good Night, and Good Luck.).

The Monuments Men present a unique situation where a handful of men are working to save history while the majority of soldiers are trying to protect the present. Superior officers are simply operating under different priorities, creating additional obstacles for the group, who understand that they are on a mission that was never meant to succeed.

Kettledrums amidst smirky whistling highlight the score, reminding audiences of films like The Great Escape or The Guns of Navarone. The on-the-nose dialogue, however, leaves audiences somewhat expressionless, inviting no indirect thoughts about a story that should spark conversations between all ages.

For those able to overlook the obvious nuances of the film, the story is nothing less than remarkable. In an era where nations are at war, a small group of ageing art experts—George Clooney, Matt Damon, John Goodman, Bill Murray, Bob Balaban, Hugh Bonneville, and Jean Dujardin—are sent into harm’s way to find stolen paintings and sculptures, taken from the Nazis by the truckload.

In the end, the film is somewhat entertaining, especially for those who hope to see a noteworthy story in less than two hours. For those who wish to dive deeper, consider reading the book:  The Monuments Men: Allied Heroes, Nazi Thieves and the Greatest Treasure Hunt in History.

[Editor’s Note: let’s be honest, this movie is Ocean’s Eleven with the Andy Garcia role played by Nazis]