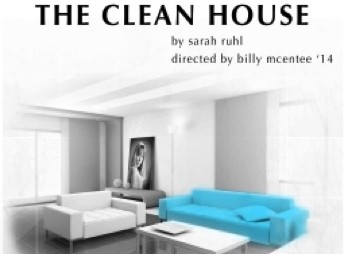 Paradoxically, an impressive and professionally staged university theater production often receives a harsher critical glare. When indulgent excuses need not be made for technical mistakes, missed cues, or flubbed lines, almost the entire critical focus shifts to the actors’ skills and the directorial choices made regarding the performances themselves. Boston College’s workshop production of The Clean House, directed by Billy McEntee, which ran January 23-25, was just such a production, and my opinion of it certainly shifted over the course of the evening.

The Clean House had an effective set in the intimate location of the Bonn Studio Theater, a black-box located in the Robsham Theater Arts Center at Boston College. The set reminded me strongly of the ultra-modern vision of the fabulous Three Sisters BC production from last fall (performed last November in the Robsham Theater, directed by David R. Gammon). Unlike the glaring, ethereal white of that Chekhovian home, the intimate space and the gentler light in the Bonn Studio served a different purpose. This luxurious home in a “metaphysical Connecticut” of Sara Ruhl’s imagining was less pristine; the furniture in the “clean house” was not actually white, but rather off-white, almost grey, hinting at both the recent accumulation of dust and dirt and the unexamined lives of the inhabitants.

This drabness extended to the owner’s outfit: we meet Lane (Amanda Melvin), uptight, successful doctor, dressed in a grey pantsuit that aptly reflects the dinginess of her personal life. Lane’s Brazilian cleaning lady, Matilde (Taleen Shrikian), has suddenly stopped working, and Lane, who is convinced her maid is depressed, is at her wits end. While her successful doctor-husband Charles (Joe Meade) is nowhere in sight until after the intermission, her sister Virginia (Maisie Laud) pays a visit while Lane is out to see how she can help.

I had mixed feelings about these two sisters at first. Lane’s interactions with Matilde in the opening scenes went beyond simply an uptight woman’s discomfort in dealing with service; Melvin delved a bit too heavily into the realm of the kind-of-racist and more-than-a-little crazy for Lane’s character. But I was much more surprised at Virginia. Laud was costumed and played unaccountably old: the sisters are only two years apart, and while Virginia certainly is more matronly than the type-A Lane, she seemed to be playing her mother rather than her sibling. More importantly, I was slowly growing annoyed at what I saw as unnecessary clowning. As Laud’s voice wavered wildly, hands gesticulated nervously, and face stretched rapidly from looks of repressed upset-edness to simpering understanding at Matilde’s plight, I was impressed by her skill but confused by so much tomfoolery. Ruhl’s characters are certainly comical, but the humor comes from both the dialogue and how the dialogue plays out in various interpersonal situations. I saw no need for such farce, and I was worried I was in for an evening of buffoonery. And it wasn’t just a matter of physical humor; the sisters seemed over-the-top in their descriptions of their all-too-real problems, as well as in their abrasive interactions with each other. Those early scenes were less about familial tension and more about mounting hysteria. While it got many, many laughs from the appreciative audience, I found it a bit tiresome.

My early cantankerousness was assuaged mightily by Shrikian. Matilde was portrayed very interestingly and, thankfully, with more subtlety. The story behind the unproductive Brazilian maid is novel: she simply does not like to clean. In the wake of her parents death in Brazil (under more comical circumstances than may be expected), Matilde has sojourned to the United States to clean houses when she would much rather follow her dreams of being a comedian. Although Matilde is saddened by the loss of her parents, her general cheerfulness echoes the joyful inner life of one whose world revolves around humor and wit, and human connection through both. Shrikian’s expressions, tone, and comedic timing were fantastic, and a welcome balm to the first act of the show. Shrikian convincingly portrayed Brazilian attitude as well as the accent and language; as a Spanish speaker with far-off Portuguese roots myself, I found her physical deliveries of the jokes splendid and entertaining.

As the play progressed, the tonal dissonance I had found grating began to smooth itself out. The very special relationship between Charles and one of his cancer patients, Ana (Thais Menendez) is discovered, and as a result, Lane’s world threatens to fall apart. Adjusting to the new circumstances, some characters rejoice while others are forced to reexamine themselves. Melvin convincingly portrayed Lane’s sense of betrayal and confused resentment, and I was absorbed watching Laud convey Virginia’s gentle compassion toward her often-ungrateful sister. My grumpiness melted away, almost imperceptibly. I’m still not sure what happened: were the actresses finally dialing it down, dropping from level 12 back onto a traditional scale of 1 to 10? Or did the very heavy-handedness that irritated me in the early scenes actually serve to bring a greater pathos to the later story?

Menendez’s captured Ana’s “glow” beautifully; the warmth of her love for Charles, her kindness towards the other women, her excruciating deterioration as the cancer consumed her, all of it pulled the audience in, and drove some to tears. I found as the play drew to a close that I was quite moved. Matilde’s humanity and Ana’s great courage in the second act were colored and beautifully enhanced by Lane’s newfound compassion and Virginia’s great sensitivity. The Clean House is set up for the women to dominate the play; however, Meade did play Charles effectively, more so in his moments of sweetness and devoted rapture than in moments of desperation. In the end, I feel these actors portrayed something quite beautiful, in a way that begrudged my earlier tetchy self-mutterings. Convinced of the caliber of student productions at Boston College, I look forward to their future shows.