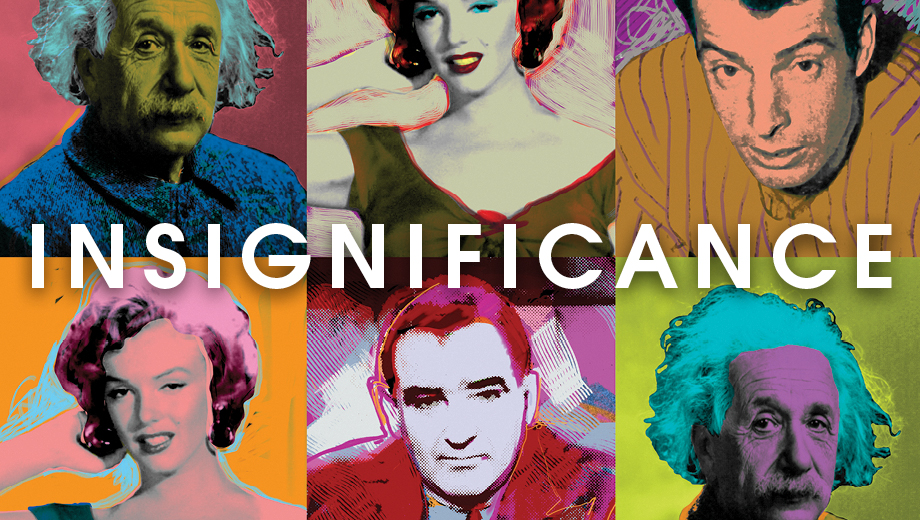 I’d been looking forward to the Nora Theatre Company’s production of Terry Johnson’s Insignificance at Central Square Theater for months. Two years ago, the company produced one of my favorite plays I’ve yet seen in Boston, Johnson’s Hysteria. That play, about a historical meeting between Sigmund Freud and Salvador Dali, was a wit-filled romp that mixed farce with profound discussions on art and psychology, and featured what remains the most stunning technical effect I’ve seen in the theater, in which the entire set melted before our eyes. So I was delighted to hear that the Nora had reunited Hysteria’s director, company Associate Director Daniel Gidron, and leading lady, Stacy Fischer, for another Johnson play. Insignificance shares Hysteria’s wit, but instead of using farce, it takes a more realistic approach to bring a touching, humanized quality to the drama.

The play centers around four 1950s celebrities, ostensibly Albert Einstein, Marilyn Monroe, Joseph McCarthy, and Joe DiMaggio, but they are never outright named, only billed as the Professor, the Actress, the Senator, and the Ballplayer, respectively. The nature of celebrity status is at the root of all conflict and philosophical inquiry in the play, so leaving the characters unnamed gives them an ironic sense of universality and unpretentious relatability. This relatability comes through in all four performances.  The actors do not perform a mere a impersonation of a historical figure from video archives. Richard McElvain’s Professor, though obviously Einstein, almost seems to be a unique character we’ve never seen. There’s a shy, fragile quality to his personality, perhaps because we’re witnessing him in the private setting of his hotel room, but there also seems to be a deliberate attempt by McElvain to create a character that goes beyond being a theoretical portrayal of what Einstein was like behind closed doors. He becomes an increasingly universal, identifiable figure, a scientist struggling to keep his bearings while answering superhuman questions about the nature of the cosmos.

It’s a captivating experience, watching actors balance that degree of historical recognizability with a unique humanity. With the actors’ success in that regard, it becomes easy to empathize with characters that may seem so distant and unreachable in the clips we see of the celebrities on YouTube. Stacy Fischer’s Actress, in perhaps the most exposed character in the play, revealing the deep, inner turmoil of Marilyn Monroe and her fragile, sensitive, and intelligent personality, while retaining the earnest sexiness for which the general public associates with Marilyn. Again, Fischer blends beautifully the movie star’s recognizable appeal with a sweet, private intimacy and a touch of non-historic character creation. Fischer brings this out in her voice for the part, which rings with a quality that captures Marilyn Monroe’s self-assured and empowered sensuality, but lilts with a tired sense of relaxation. This is a more private Marilyn, an actress exhausted by the ravishing of her fans, who has come into the Professor’s hotel room to reveal her secret inner mind and beauty. It’s refreshing to see such a tender portrayal of a distant figure. It makes us love the actress more than we could have from only witnessing her public persona, even if this is just dramatic fiction (or perhaps it’s easier to love her because this is dramatic fiction).

The highlight of the play is the dynamic between the Professor and the Actress.  McElvain and Fischer not only find a sensitive humanity in their roles, but also use that sensitivity to fuel a sweet and livid connection with each other. Tender, passionate, and, most impressively given the age difference, deeply sexual, I was completely intrigued in and immersed into the profound and flirtatious dialogues the characters share about science and the importance of humanity. It was all the more impressive considering how little we may have thought Einstein and Marilyn Monroe might have had in common. Perhaps the play is challenging our perception of celebrity, using their differences in character to create a perversely appealing duo while acknowledging the symbiotic possibilities of genuine and exposed human beings.

Playful at first, their dynamic becomes even more intriguing by the end of the play.  Insignificance never quite stops being realistic, but the dialogue and plot become deliberately disorienting toward the play’s end, culminating in a jarringly riveting lighting effect. This effect mirrors the stupor of the melting set from Hysteria. Though a simpler effect, it still creates an uncanny feeling of confused splendor, a moment of livid theatricality where I experienced a supersensory feeling of emotional power from what was happening onstage.

Scott Pinkney’s lighting design was touching throughout the performance. With the theory of relativity and the speed of light so foundational to the drama, Pinkney’s lighting takes on a symbolic quality. An arrangement of single light bulbs hangs from the fly space, drawing attention to the lights themselves. Light changes are exposed and noticeable, but instead of distracting form the drama, the exposed lighting amplifies and accentuates the characters’ cerebral turmoil. Also effective is Dewey Dellay’s soundscape, which utilizes intoxicating minimalist music that helps bring the emotional lividity out of some of the play’s cerebral dialogue.

Like with so many productions at Central Square Theater, Daniel Gidron and company have succeeded in bringing emotional lividity and genuine humanity out of a brilliant but possibly off-puttingly cerebral text. Insignificance never feels like a lecture on science and philosophy, even with an extended detailing of the theory of relativity, because the human drama is so engaging. Despite the playwright’s success in England, Terry Johnson’s work has not yet caught on in America. Perhaps his plays are a bit overly cerebral for American audiences, but they certainly play well in Boston, and I only hope the Nora Theatre Company continues to produce more of his plays in the future.