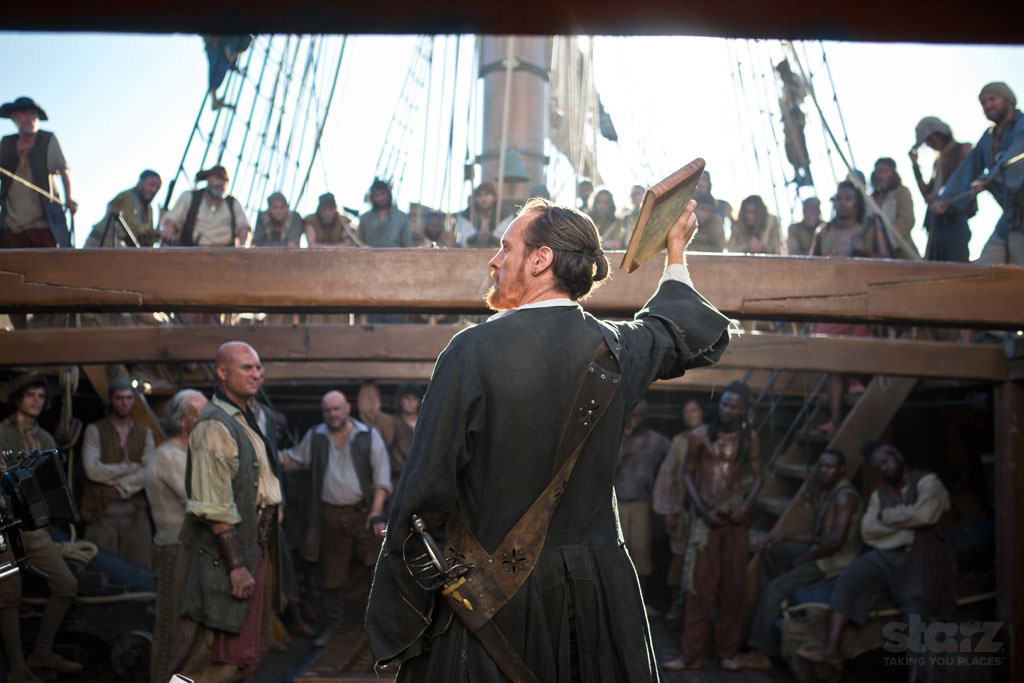 Starz has had a problem of late, where they announce shows that sound absolutely amazing, but when they actually premiere, they fall miserably flat. It happened last fall with The White Queen, and it happened again this week with Black Sails.

It should have been brilliant: a pirate show starring Toby Stephens? Yes please. Stephens has more than established his period costume cred. He appeared in Trevor Nunn’s Twelfth Night, and in the 2006 Jane Eyre, which is the best Jane Eyre. (Sorry Michael Fassbender). Granted, those were a while ago, but it’s enough to make me at least interested in his next projects. Add pirates in the mix, and it sounds like a winning recipe.

The biggest problem is none of the characters are particularly likeable. The show sets it up so Stephen’s Captain Flint and Luke Arnold’s John Silver are the main characters. They’re opposites, and though they didn’t interact in the episode, they’re clearly going to be at odds before long. Silver stole a schedule Flint was looking for and was looking to sell it to someone. He has no loyalty to anyone, and has no qualms lying, cheating, stealing or murdering as long as he profits from it. There are ways to have likeable characters who just want to survive, or hell, even likeable characters you know are terrible, opportunistic people, but for some reason, you still want them to win. Silver just comes across as a skeezy coward with no redeeming qualities.

It stands to reason that if Silver is just plain awful, Flint should be the character we root for. That’s fine. In literature, Silver is a villain, anyway, so why not root for Flint? At the beginning of the episode, he showed a distaste for unnecessary violence. We watched his crew pillage a ship, but he did not want to watch the captain of said commandeered ship be tortured. He was shown to rely on his intelligence to get ahead. This fell apart by the end of the episode. First, he declared himself ‘king’ of the pirates and said he was the only one who could make sure they could survive. Ego, insanity…check and check.

Flint redeemed himself a little, when he turned the tables on Singleton, one of his crew men who wanted to replace him as captain. Flint accused Singleton of stealing the schedule they need to find an epic treasure. This was actually a clever way to get back the loyalty of the crew. It also meant he and Singleton had to fight each other to the death. The fight ended with Flint soaked in blood, killing Singleton with his bare hands. It could have been an interesting character progression to watch a man who didn’t use violence unless he had to eventually beat his enemy to death. But it happened over the course of one episode, so it made him seem psychotic. Then he handed a blank piece of paper to Billy (one of the few characters I actually care about) and pretended it was the schedule, ‘proof’ Singleton stole it. That’s a great plan…except now your crew thinks you can lead them to a treasure you haven’t the faintest idea how to find. He could have lied and said Singleton sold it to someone else. But no. Flint fixed one problem then immediately dug himself into another hole.

So now the audience is left with a psychotic idiot and a backstabbing opportunist. There is a third pirate, Captain Vane who has it out for Flint, so maybe in the first season Flint and Silver will have to unite to defeat Vane, but who cares? They’re all equally terrible. Starz really wants to produce the next Game of Thrones, but unlike Thrones, it hasn’t mastered how to write characters who do bad things still come across as sympathetic. This might change as there are more episodes, but for now, I hope they all lose.

The supporting characters are hit or miss as well. There are a few good crew members that hopefully will not die the terrible deaths I fear they are destined for. Max is another character that promises to be interesting, even if she is working with Silver to sell the stolen schedule. If she were a main character and Silver were assisting her, maybe I could get behind this show. Eleanor felt like a character I’m supposed to like, except it felt like the show was trying too hard to make me like her. Look! She curses and punches people in the face and she’s just as crass as the men. Don’t you like her? Not really. I might eventually like her, once you stop trying so hard to make her seem cool.

That’s the show’s other main problem. It’s trying too hard, and you can tell. It doesn’t add anything new to the pirate genre. It tries, by showing the administrative side to the pirate business (I never did catch the book-keeping pirate’s name. He was alright). Vikings is a current show that does a much better job of taking an infamous group of people renowned for violence and showing that they are more than bloodthirsty killers, that they are people. The best Black Sails did was show the pirates were more organized than you might have thought; they make a business of reselling stolen goods. But by focusing on the business aspect, it only strengthens the preconception that pirates were obsessed with gold. Black Sails does nothing new to shed light on their humanity. It’s filled with sex and violence galore, and if that’s your thing, then you will probably enjoy it. But for me, it is a violent show about terrible characters going on a quest for treasure that I don’t really care about. If they want to go looking for something, how about their personalities or at least some originality.

Other thoughts: I might not like the show right now, but it has some wicked awesome opening credits.