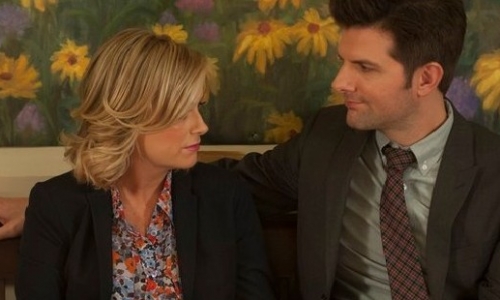 Last Week marked the 100th episode of Parks and Recreation and Amy Poehler was finally recognized for her work as Leslie Knope at the Golden Globes Sunday night. Parks and Rec never fails to make me smile. They blend sweet with funny incredibly well, the characters are endearing and hilarious and the show incorporates current events and satire perfectly. They really know what it’s like to work in politics. What can I say, that Anthony Weiner joke just got me.

The 100th episode was a huge milestone especially for a show whose future always seems uncertain. This past episode showed many of the characters taking steps forward. Ann and Chris find out they are having a boy and Chris gets to pass on his mastery of shaving the male face, Jerry is now Lenny, and, following in April’s footsteps, Tom has created his own position and is now the Business Liaison. Maybe this will be the endeavour that finally sticks for Tom. It’s a long cry from Entertainment 720, but it seems like it’ll be a good place for him.

While Tom’s dreams are getting smaller and more rooted in reality, Leslie’s are only getting bigger. Leslie was having a hard time letting go of being Councilwoman Knope and even thought she should run again against Councilman Dexhart. However, no one but Jerry was for the idea. Even a sleep deprived and jet lagged Andy knew it was a bad idea.

Meanwhile, Ben was having a hard time finding her a “sorry you lost your dream job” gift. After passing on a singing telegram from the Requiem for a Dream soundtrack, he finally landed on paying for an hour of Jennifer Barkley’s time (and also a trip to Paris) and Leslie got the best advice. It’s time to think beyond her beloved Pawnee. Yes, she lost her dream job, but her dreams weren’t big enough. Perhaps a seat in Congress is in her future.

After struggling and going through her disillusionment on city council and having to work with such difficult people, I’m not sure how Leslie would take dealing with people in Washington, but I would love to find out. She could definitely whip them into shape.

Leslie hasn’t made any decisions yet, though. She decided to go to J.J.’s and get some waffles and make out with Ben. Then, Ben took her to Paris where they got to be adorable together. That’s exactly what Leslie needs right now, but she’s too smart and ambitious not to make her next move soon and I can’t wait to find out what it will be.

My hope is that Parks and Rec will be around long enough that we will actually see Leslie Knope in the White House just like she’s been saying all along. I’d wish them luck, but “luck is a concept invented by the weak to explain their failures.”