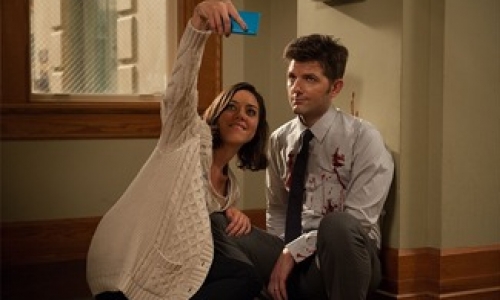 This week’s Parks and Rec was one of transitions. With people moving forward, and some moving back, the characters have to decide what to do and where they belong. There have been a lot of changes in these people’s lives and some transitions are easier than others. The show itself is also dealing with its own transitions with the departure of Ann Perkins, the beautiful tropical fish, and the ever perky and optimistic Chris Traeger.

Ann and Chris are having a baby and will soon be moving on to a new city to start their lives together. Now, all they have to do is decide whether or not they want to get married, and poor Ted has to bear witness to their cheery indecisiveness. It all started when Larry mentioned that he thought they should get married and then promptly chocked on a cracker. Stupid Larry. Chris proposes and Ann agrees all while ignoring Larry. I have got to say, Ann is a pretty terrible nurse, but that’s okay because she and Chris are in love now. In the end, they decide not to get married, but buy a locket in place of a ring so Ann can put a picture of their baby in it. The back and forth this episode was a bit irritating and didn’t feel all that consequential, but they ended up happy and adorable, so it all worked out.

Meanwhile, Leslie is having a hard time readjusting to being Deputy Director of Parks and Recreation. She nearly destroys Tom’s plan to set up a lemonade stand where there used to be a stew stand just to prove that she matters. Things are different now and that’s hard for her to deal with and she starts to wonder if she’s not needed. Ron bluntly tells her that she’s not, Parks and Rec isn’t the final stop for Leslie Knope. While she may be back temporarily, everyone knows and has been saying that Leslie will be moving on to bigger and better things. She can leave knowing that Tom was able to get his lemonade stand idea to pass because she taught him so well and he developed into the government employee he is today because of her, much to Ron’s dismay.

Ben also has had some big changes in his life. He has stepped up and into Chris’ role as City Manager, or as Andy puts it, Governor. Not only does he have a new and demanding job to do with the stress of not screwing up like when he was Mayor, but he also has to learn how to negotiate being a boss without Chris. He has to be both the upbeat and firm one, and this throws him through a hilariously neurotic and anxiety ridden loop. In order to get him to loosen up, April, Donna, and Andy pull a prank on him and even bring in his biggest fear: the police. After bragging about his illegal French cheese, they pretend to get arrested, but he doesn’t take it in stride. Instead, he panics and then after realizing he was pranked, threatens to suspend them if they do it again. Andy convinces Ben to just prank them back, and in true Ben fashion, Ben goes overboard. He concocts a whole kidnapping scene full of fake gunshot wounds and near death experiences, but at the last minute, he freaks out and reveals his plan. This was a hilarious episode, even if it’s just for Ben alone. His anxiety and his nature to end up taking this too far were just perfect.

It will be interesting to see where things go from here. Rashida Jones and Rob Lowe will be leaving soon, and while they will be missed, it looks like there will be a lot of excitement coming for Leslie. With all this talk about her moving on to better things, something big better be coming. Parks and Rec was just renewed for another season, giving her lots of time to prepare for her next campaign.