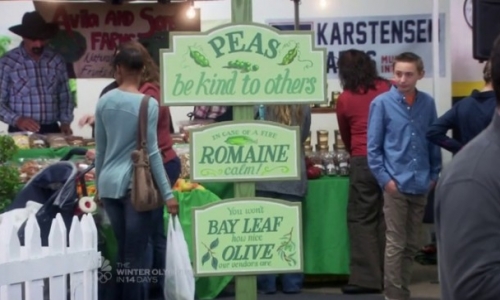 This episode of Parks and Rec had its funny moments, especially with Ron and Craig. However, I am pretty ready for Ann and Chris to leave. Their storylines have been kind of boring this season. I do still love them, though, and hope they get the huge sendoff they deserve.

The episode starts off with Leslie and Ben living in a happy fantasyland where working together and living together is the best thing ever and nothing can go wrong. That quickly deteriorates after their trip to Leslie’s farmers market. While the farmer’s market is a success and is helping people live a healthy lifestyle (people think broccoli is a tiny tree and cauliflower is dead broccoli), the chard stand is using raunchy sex appeal to garner business and is causing poor old Connie Cabbage to stoop to unbuttoning her shirt to get costumers. Now, Leslie has taken it upon herself to take the chard man down because he’s breaking all of the market’s rules of conduct: “peas be kind to others, in case of fire romaine calm, you won’t bay leaf how nice olive our vendors are.” This episode was super punny.

While Ben doesn’t agree with the chard stand, as city manager, he doesn’t think there’s anything he can or should do. Leslie disagrees and is determined to make Ben see things her way. She won’t take no for an answer and won’t talk about anything else, completely ignoring the personal part of her relationship on only focusing on her professional relationship with Ben. Things get so intense with Leslie’s steamrolling that Ben decides they should only talk about work things at work, which means on government property. Leslie’s okay with that until Ben starts to avoid her, the conversation, and confrontation like the plague. Her love for the government comes in handy, though, and, as usual, is one step ahead of Ben. She knows that nearly everything is made and owned by the government, including the road she starts chasing Ben down. Ben and Leslie ultimately realize they need to strike a balance while standing in a freezing fountain. As far as the market goes, there is now an after dark market for adults only where people can take all the chard shots they want.

Ann and Chris are having their own problems. Chris’ endearing cheeriness and optimism have become overwhelming and grating to Ann. He has been giving her too much flax seed milk, which sounds just horrible. This causes Ann to disrupt Donna, Tom, Larry and Ron’s wine and cheese club, their monthly meeting where Ron pretends to listing to Donna, Tom, and Larry voice office complaints while really listening to Willie Nelson records. Ann takes over to vent about Chris and ruins the wine and cheese club for the rest of them. So, they take matters into their own hands and confront Chris for them and Chris leans to stop fixing things and tell Ann “that sucks,” something he has probably never said with his never ending love of everything.

Back in the Parks Department, Craig is back and is as loud, angry, and hilarious as ever. He needs a band for his terrible nephew’s birthday party and April signs Andy right up. Craig only really makes a brief appearance in the office and at the party, but it makes the episode that much better. Every time he’s on screen, he’s outrageous and crazy and has made an excellent addition to the Parks Department. Hopefully we’ll get to see more of him.

The rest of Mouserat doesn’t want to do a children’s party, even if Dave Grohl might be there (“the guy’s awesome and he’s unpredictable”), and Andy is left to make “Sex Hair” appropriate for children all on his own. He changes it to “Sex Bears” before realizing that the sex part is what needs changing. He decides to wing it and finds out that he’s really good at being a children’s performer, transforming into “Johnny Karate and his magical guitar stick”. He even gets to be “Bert Macklin: FBI” while he’s at it. April even says he could make a career out of it and he’s already signed up for another party. Even though this means Andy won’t be a rock star, Andy had the time of his life and it only cost him $150. Just like Tom, Andy may have found the perfect job that he can actually do.

Perhaps the most important development for this episode, however, is probably the fact that Ron learned there’s an amazing rectangle that can play his music. The world is full of incredible things. I can’t wait for Ron to talk to Siri.