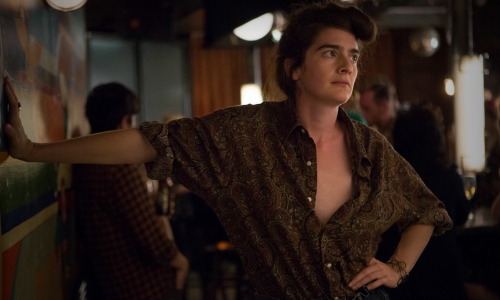 Hannah turned 25 this week on Girls, so we got to see everyone come together. Even Tako with a K made an appearance. Hannah celebrated at a party that Marnie planned with Hannah’s parents’ money and Shoshanna exclaimed how amazing it was how little they had all accomplished since college. And thus, the night began.

Marnie has been growing more and more selfish and desperate. True, she has been having a hard time since Charlie left, but she has become completely self-centered and has little regard for anyone else. From her subtle jab about how Hannah could look if she tried, to her forcing Hannah to ring “Take me or Leave Me” from Rent with her despite Hannah’s objections, Marnie is starting to win first place for least likable character for me. That being said, that youtube video of her singing was cringe worthy and hilarious. I couldn’t look away, but it hurt to watch.

Ray is dealing with his own relationship woes when he realizes Shoshanna came to the party with another man. This leads to him confronting the DJ and Hannah’s editor David when David has Ray’s song changed to “Sexy and I know it.” Hannah’s editor David had unexpectedly shown up and is hilariously inappropriate and uncomfortable. This leads to him going on a tirade about how there’s a queue and how things shouldn’t end in the middle. He is obviously hurting by Shoshanna’s antics.

Adam and Hannah’s relationship is put to the test when Adam’s sister Caroline blows through and brings a mixture of pain, crazy, turmoil, and manipulation with her. Adam is dead set against having her stay, but Hannah’s heart goes out to a woman who is obviously hurting. She goes to the party with them and ends up biting Ray after he rebuffs her in one of the best scenes of the episode. She winds up back at Adam and Hannah’s and crushes a cup in her hand while she’s standing half naked in the bathroom. Hannah lets her stay in the apartment and Adam tells Hannah that this means his sister has won. Having Caroline around will definitely never be boring, and it will show us more about Adam in the process. Besides Caroline’s antics, though, Hannah and Adam are actually happy and doing well. Adam even gave Hannah a necklace with his tooth, which is disturbing, but to them it’s sweet.

This was a pretty good and revealing episode. It was heavy, but not in a crushing way. I’m interested to see what else Caroline will be up to. She is definitely an exciting and intriguing character. Though her situation was sad, everything she said was hilarious. It will be interesting to see how she affects Adam and Hannah’s relationship along with everyone else she’ll leave in her wake.