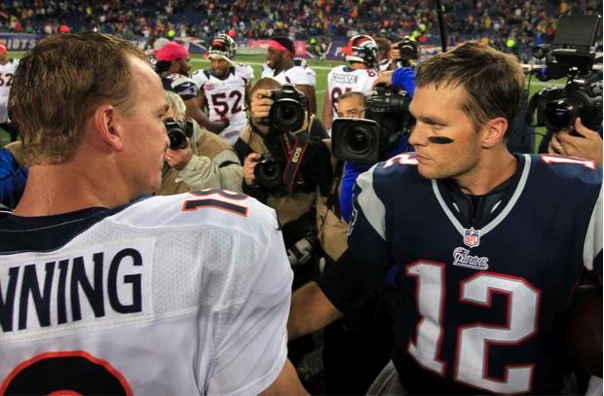 With Superbowl implications at hand this weekend, the NFL conference championships surely will not disappoint.  In the AFC we have Peyton Manning and the Denver Broncos who will welcome Tom Brady and the New England Patriots to town­. With these two future Hall-of-Fame quarterbacks this game is going to be a shootout and could come down to the final possession.

These two teams squared in week-twelve which saw New England come back from a 24-point deficit at half to win the game 34-31 in overtime at Gillette Stadium. Tom Brady threw for 344-yards and three touchdowns in the win. Brady is 10-4 all-time against Manning, and has hopes to making it eleven in order to solidify a spot in his sixth super bowl appearance– despite statistically having his worst season since 2006.

Despite the loss of Wes Welker, Rob Gronkowski, and Aaron Hernandez Brady was able to get his team into the playoffs and into the AFC championship game. New England has resurrected their run game the last couple games as Laguarette Blount rushed for 189-yards in the season finale against the Buffalo Bills, then 166-yards last week against the Indianapolis Colts. With the injury to pass rusher Von Miller and breakout corner Chris Harris, Denver’s defence will have to be more inclined to helping out the secondary with Brady under center; this should give Blount all the help he needs to have another great game this weekend. If Blount starts out hot and Denver starts to stack the box, Brady will air it out. A balanced offence is always the most dangerous offence.

There is no doubt that Peyton Manning is having possibly the best season by a quarterback ever. He now holds the record for yards in a season, touchdowns in a season, and most points scored by an offence. He connected for 10+ touchdowns with 4 different receivers; this was a first time that’s happened in NFL history. Former first round “bust” Knowshon Moreno finally put together his best season since being drafted 12th overall in the 2009 draft. He rushed for over 1,000-yards for the first time while punching the ball over the goaline ten times. He also caught 60 balls out of the backfield for 548-yards and three touchdowns; his best previous was 37 catches for 372-yards back in 2010. Last time these two teams played Moreno had the best game of his career rushing for 224-yards on the ground with a touchdown on career high 37-carries. With a balanced Broncos offence they are dangerous, but Bill Bellicheck always has a plan when it comes to shutting down Manning. Peyton Manning’s success will be the “X-Factor” in this game. If he is at his best and has his way with the Patriots defence like he has with the rest of the leagues, putting up points shouldn’t be a problem.

With Superbowl aspiration on the line both teams will come out swinging, but only one team can prevail and represent the AFC in the Superbowl. So who will it be, Denver or New England?