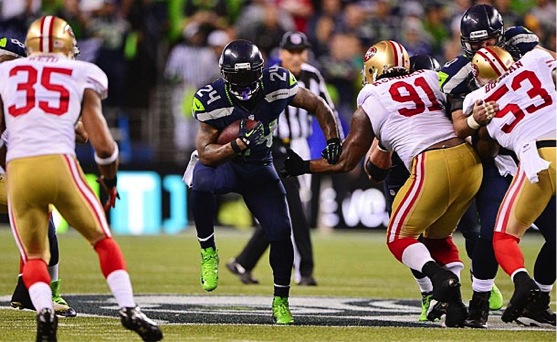 With Super bowl implications at hand this weekend, the NFL conference championships surely will not disappoint.  In the NFC championship there is a couple of division foes ready to battle it out for the third time this season as the Seattle Seahawks will host the San Francisco 49ers.

Defence wins championships. The NFC match-up will be a low-scoring defensive affair as both teams are top teams in all of the NFL. Seattle was the #1 ranked defence in the entire league during the regular season, while the 49ers were ranked 5th. They split the two regular season games they played against each other this season with Seattle routing San Francisco at home 29-3 in week-two. In week-fourteen San Fran came away victorious with a close score of 19-17.

Seattle is one of the best Home teams in the league and their building is always rocking. Both home teams have won in their building so this should give Seattle an edge right away. In both games this year, the very talented agile quarterback, Russell Wilson has not been able to post more than 200 yards in the air against the 49ers Defence. However, keep in mind that Russell Wilson’s best weapon did not play in either game, Percy Harvin– although his status for this weekend’s matchup is questionable. While on the ground Marshawn Lynch has averaged 85 yards a game against the 49ers this season. Not a terrible ground game, but not stunning either. Marshawn Lynch has got to go “beast mode” this weekend to give the Seahawks the edge over the 49ers– he will be Seattle’s “X-factor” in this game.

Colin Kaepernick is enjoying a successful first full season as the starter for this team. For the second year in a row he has led this team to the NFC championship game, and is trying to make it back-to-back Super bowl appearances. Getting through that Seattle defence will be tough but Kaepernick has more tools at his disposal than Wilson. With a healthy Michael Crabtree, Anquan Boldin, and Vernon Davis Kaepernick’s arsenal is jam packed with down field threats. In the Wild Card matchup Crabtree churned out 125 receiving yards against the packers, while Boldin went off for 136 against the Carolina Panthers, dubbed by some as the best defence in the league. The last time these two teams played Boldin led all receivers with 93 yards on six catches, and will look to replicate that type of offense this week. As for Frank Gore, he ran the ball down Seattle’s throat, going for 110 yards on just 17 carries. San Francisco always is a legitimate contender, but it nearly unstoppable if they can get their run game going with the duo-threat of Gore and Kaepernick.

With Superbowl aspiration on the line both teams will come out swinging, but only one team can prevail and represent the NFC in the Superbowl. So who will it be, Seattle or San Francisco?