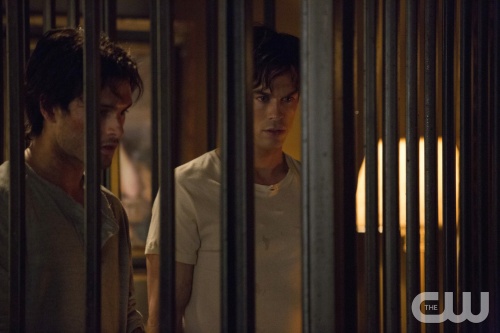 The Vampire Diaries 509 “The Cell”

This week’s Vampire Diaries was loaded with deadly flashbacks and one cute new vampire. Remember, good looking is a requirement on any CW show.

In “The Cell,” Damon and Elena were literally in cells after being put down by Dr. Wes who is carrying on the Augustine experiments from Damon’s past. Last episode, it was revealed that Damon was an Augustine vampire, and after losing Jesse (RIP you poor, beautiful soul), Dr. Wes was more than happy to have another vampire take his place. Turns out, Augustine is a place where vampires are tortured for humans to learn about their healing powers. Dr. Wes is taking it one step further; by making vampires crave vampire blood instead of human blood.

Throughout the episode, Damon explains he survived Augustine last time because he had a friend named Enzo whom had already been there for ten years. Both men were tortured, and their strength was kept low by only being allowed to drink a cup of blood a day so they wouldn’t desiccate. Enzo cooked up a plan wherein one of the vampires would drink both cups so he could get stronger. Lucky for Damon, he won rock-paper-scissors duel and drank Enzo’s share of blood every day for a year until he was strong enough to attack the whole Whitmore clan and escape. Poor humans, don’t they know New Year’s Eve is always a letdown?

Since Damon is Damon, when a fire started, instead of saving his friend Enzo, he escaped and left him to die. And ever since 1958, he’s been killing all but one person in a generation of Whitmores in order to keep the bloodline going. Then he slaughters another generation. This story does not make Elena happy, and makes her new friend Aaron even less happy when its revealed he’s a Whitmore; the final one in his generation no less. Well at least we know where his whole family went. Still, got to be nice knowing you’re not some sort of death magnet, right Aaron? Still, he’s understandingly upset and shoots Damon. I guess he doesn’t realise vampires don’t die without a stake to the chest or their heart being ripped out, so the bullet to the brain only makes Damon pass out. When he awakes, Elena has been taken away for some unpleasant experiments, where she meets none other than the legendary Enzo. Dudes been locked up for seventy years, how has he not come up with any more escape plans?

As for Stefan, he’s trying to get over his fear of drowning with the help of Katherine and Caroline. Katherine soon helps him realise that the fear isn’t actually coming from dying over and over, but rather living after Elena had dumped him. Which leads them to an almost kiss and then a private session that Caroline inadvertently overhears. I guess the best way to get over his ex was to get under his other ex who happens to look just like the former ex. Man this show is twisted!

MVP of this episode: Nina Dobrev’s voice for managing to not give out even while pulling double-duty in an episode that was light on series regulars.

MVP 2: You, if you got through the previous sentence in one breath.