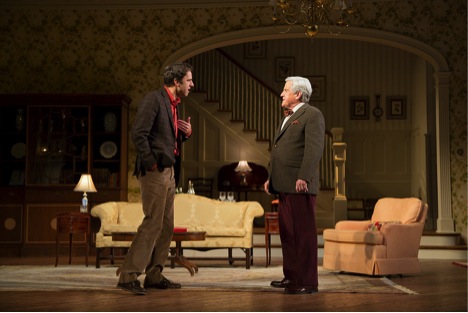 A. R. Gurney’s The Cocktail Hour is a witty, boozy comedy that shines a light on the many flaws and subtle delights of one WASP-y household in Buffalo during the 1970s. This autobiographical play centers on John (James Waterston), a repressed, neurotic publisher moonlighting as a playwright. John visits his parents in their twilight years to receive permission to put on a new play. Permission is needed because the play just happens to be about them: about his serene mother, Ann (Maureen Anderman), and his volatile sister, Nina (Pamela J. Gray), but mostly centering on his tempestuous, overbearing father, Bradley (Richard Poe). Once this literary venture is revealed, personal barbs whiz back and forth, martini glasses are repeatedly refilled, and hilarity ensues. The Huntington Theatre Company’s production, directed by Maria Aitken, gives us a peek at this crumbling world of white privilege and connection, a world with just enough amusement and pathos to make us almost regret that it has mostly vanished.

I tip my hat to Allen Moyer (scenic designer) because the set was absolutely beautiful. Our glimpse of Bradley and Ann’s tastefully furnished home comes mostly from the living room, where the cocktail hour is held. Hardwood floors, a large and faded carpet center-stage, cream-colored sofa and comfy armchairs, a lovely piano next to an old-fashioned desk, a large wooden bookcase, and a large wooden china cabinet flanking an upstage arch, through which we spy the stairs leading to the second floor. A fireplace, a chandelier above, pastoral wallpaper, and an Impressionist painting over the mantel complete our view of this quietly elegant home, including, lest I forget, a small bar located behind the sofa, where the booze flows freely.

The technical attention to detail was astonishing. From where I was sitting, you could also see offstage left into the unused dining room beyond, where dinner would not be served until the end of the extended cocktail hour. When the play begins, an afternoon light gently glows through the set, and as the play progresses Bradley and Ann turn on additional lamps and the chandelier, alerting us to the imperceptible lighting change indicating that the afternoon is waning as slowly as the cocktail hour is churning forward. In fact, my only technical criticism was volume; from where I was sitting, I admit I found it difficult to hear what some of the actors were saying at times, mostly during the comparative calm of Act I.

And you don’t want to miss a word. The play is full of delightfully winking comments about the theatre and those who attend it. Bradley insists the theatre is not what it used to be, that it now only consists of actors who “stand around and shout obscenities at each other…and then take off their clothes.” Of course, this is a WASP-y household, so we mostly just get raised voices, as John indirectly reassures us. Since this is a semibiographical play about a playwright who comes to his upper-crust, New England home, to ask permission to put on a semibiographical play about his parents and their upper-crust, New England way of life, it is difficult to not take all the meta-references quite directly. I, for one, took Bradley’s comments on the fallibility of critics, and Ann’s assertion that many play-reviewers don’t know what they’re writing about, as very fun, direct jabs.

Poe, Waterston, Anderman, and Gray all gave sharp performances, knowing when to zip through funny zingers and when to screech or slow to a halt in tenser moments. Poe certainly stole the show for the first act, his paternal, blustering certainty effectively aggravating his son while somehow completely charming the audience. Bradley would one minute be gruffly arguing with John, only to carefully tread up the stairs after Nina the next, uttering soothing pet names up after his darling girl. But Anderman gave Poe a run for his money during the second half of the play. She manages to convey the quiet strength of the matriarch, full of patience and wit, while also very subtly hinting that there may, after all, be some “beans to spill.” In comparison to these two entertaining progenitors, Gray and Waterston were quite good, though perhaps less gripping at times. Gray made for a delightfully uptight daughter of wealth, alternating between berating her brother with borderline-hysterical weeping (surprisingly funny to witness!) and living up to her role as a youthful voice of reason and a pillar of familial support. Waterston’s voice is recognizable anywhere, and I was delighted to confirm I had heard him during the Commonwealth Shakespeare Company’s production of Othello (I say heard, since I was sitting way too far back to see him properly). As John, Waterston stands wonderfully gawky and uncomfortable. He “Yes, Pop”-s his father with forced cheeriness in the opening scenes, before growing increasingly despondent, and before getting downright furious as the scotch begins to hit home. Waterston really came alive when going off on John’s self-absorbed flights of fancy; John’s description of one of his childhood plays, as well as his obsession with writing drama, were entertaining highpoints in Waterston’s performance.

The audience had a surprising and interesting influence on how I experienced the show. The majority of the audience was older, ranging from John and Nina’s to Bradley and Ann’s age; I was easily one of only a handful of attendees under thirty. I don’t think it’s coincidental that this audience seemed to particularly take to certain moments in the play, despite the fact that the whole show was so well performed. The Huntington’s artistic director Peter DuBois spoke on the company’s website about how a good portion of the audience would undoubtedly recognize how the play “captures a slice of New England life.” But perhaps it was not just the regional closeness that drove our amusement (although I couldn’t help but grin at the reference in the play of how one of John’s shows had been performed at Boston University’s theater). Every single reference Bradley made to his “immanent” death got an exponentially louder chuckle from the audience, until the mere mention of paternal demise required a pause from Poe for laughs. Was this reaction due to a wry appreciation both of Bradley’s genuine worry about human mortality and of his silly fixation on his own expiration? Whatever this empathetic connection may have pointed to, what was clear was that everyone in the audience felt they were really witnessing a family on that stage, a family whose amusing foibles made their connections all the more poignant and genuine.

While this production was almost doggedly faithful to the script, technically and dramatically, there were certain moments of staging innovations (certain looks, certain entrances) that added an extra “splash” to the narrative martini. But rather than reveal what I believe these were, I invite you to sample this concoction yourself. Full of crackling wit and many a tender moment, gorgeously staged for our viewing pleasure, the Huntington Theatre Company’s production of The Cocktail Hour is guaranteed fun and should not be missed.

Performances run from November 15 to December 15 at the Boston University Theatre.