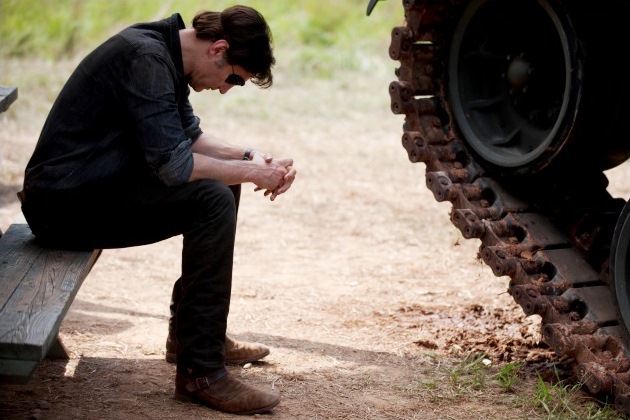 After a mysterious disappearance, a new name, and a new life, the Governor is back on The Walking Dead. Picking right from last week episode, Martinez rescues young Meghan and his former boss from the zombie pit. He informs the Governor that they have a new settlement, but he must accept Martinez’ command and their commitment to Darwinian self preservation. No dead weight. The Governor and his surrogate family travel to the new camp, a haphazardly constructed circle of RV’s and tents, very far removed from Woodbury. Martinez is very eager, like stupidly eager, to bring the Governor into his inner circle, consisting mainly of brothers and army vets Mitch and Pete, and couple of other no names with big guns. Martinez tells the Governor that the fact he was protecting Meghan in the pit is what convinced him to take them in, as the old Governor would never have done such a thing. So one moment of kindness apparently cancels out killing dozens of his own troops.

Martinez brings the Governor, Mitch, and Pete on a supply run, where they find a cabin filled with Walkes, after the former resident seemed to go a little insane. The Governor uses the opportunity to size up the others, and comes to the quick conclusion that none of them of truly suited to leadership, at least in his eyes. When they get back to the camp, Martinez reveals a pack of golf clubs to the Governor, and invites him to a friendly driving session on top of an RV. Martinez remarks again how the Governor has changed, and he recognizes the expertise that he brings to the camp. Martinez even suggests that they can share leadership duties, which is when the Governor smashes his head open with a golf club. The Governor drags Martinez to a zombie pit, and feeds him to the Walkers, all while muttering how he doesn’t want to be the leader. When Lily later finds the Governor, clearly shaken by what he was done, he tells her he just had a bad dream. All the links to his past are now gone, and this is his chance to truly start over again and build and new, less murderous life.

And that last about five minutes before he starts killing people again. With Martinez’ death, Pete steps in to fill the power void, and becomes the de facto leader. A new Rick for the Governor to contend with. The trio goes on supply run and stumble across another camp. Mitch wants to raid them for supplies, while Pete is burden with a conscious, like a normal person, and decides to let them be. Which proves foolhardy when they pass by the camp later, and find that in the twelve minutes they weren’t there the camp was razed by zombies, rendering all the supplies useless for everybody. Back at their settlement, the Governor goes to see Pete, ostensibly to talk about Mitch, and immediately stabs him to death.

The Governor attaches weights Pete’s body and throws  it into the lake. He tells Mitch what he did, and he takes the death of his brother very well, in the way that only a crazy person can, and the Governor lays out the new situation. He’s in charge, and he will even more ruthless then Mitch, and will kill to protect their group. The Governor raises his standing with the group when he saves Megan from a Walker that had found it’s way into camp, and now everyone looks up to him. The Governor tells them that they need a place to live that’s more secure, with walls and fences, where they’ll be safe. The Governor drives to the prison, and spots Rick and Carl, before pointing his gun at Michonne. And the Governor is back. Woodbury vs prison: round 2.

These past two episodes feel like the producers of The Walking Dead wanted to make a prequel to the series without making a prequel to the series. It feels like this very likely that way that the Governor first took charge of Woodbury. Some will see it as using the Governor of an example of how difficult it is to get away from their past, and how deep the post-zombie madness has been ingrained in people, while others will see that it has basically let the show recreate the finale of season three. Despite the more cynical possibilities, it should be noted that these past two episodes of featured an incredible performance from David Morrissey as the Governor, and he has infused the character with much more pathos and depth than previously seen. At least until he starts killing rivals and you realizes they’re sorta doing the same story again.