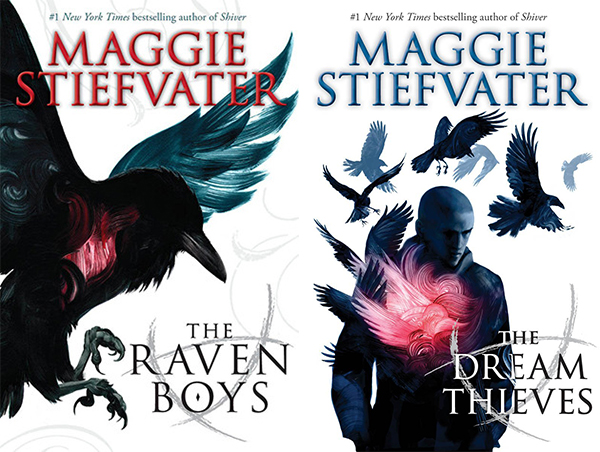 I don’t know that I can speak objectively about reading The Raven Boys, or its follow up The Dream Thieves. Since long commutes are a fact of life in southern california, and reading while driving a car tends to end badly, I listened to both on audiobooks. And they enraptured me. I fell deeply into the world and the music of Maggie Steifvater’s writing. Crawling out was like crawling out of a dream when you’re stuck in REM mode.

The Raven Boys and The Dream Thieves tell a southern-tinted, magical realism style story about Blue, the only non-psychic in a family full of psychics, who was fated at birth to kill her true love when she kisses him. If that seems a little overwrought, somehow Steifvater makes it work. Blue’s story is a lot more than that tragic romance set up makes it appear.

The first book begins with Blue in a cemetery during the yearly trek of the dead. Basically, once a year you can see the souls of the soon-to-be-departed as they traverse the cemetery. Every person they see is going to die within the next twelve months, but they help to give these souls a little peace. And it’s there that Blue first meets Gansey, as a floating spirit heading towards his hereafter.

And then of course Blue meets Gansey in the flesh, and falls in with him and his group of friends from the local prep school. The story, which starts with a beautiful mood but not much to offer in story, eventually expands to include magical powers, an epic quest to find an immortal knight, the pain and scarring of child abuse, the ennui of being young and rich and limitless, the fear of poverty, and the enduring struggle of growing up. I’m not going to get into too much plot here, because that’s inevitably reductive. What happens isn’t as important as how delicately and beautifully Steifvater crafts her world and her tone.

But I can’t say definitively if my adoration is for Maggie Steifvater’s writing and words, or if it’s the fantasticness of my AudioBook’s narrator, Will Patton. I listen to a lot of audiobooks, and I listen to A LOT of audiobooks of young adult fiction, and I’ve never encountered a reader quite like Will Patton. Counter intuitively, Patton narrates the book with an aging cowboys smoker grace, making everything feel timeless and pre-ordained. His unique voices tell me so much more about the characters than mere words could. By the end of the second book, as previously secondary characters rise to primary status, and his stable of voices increases to ridiculous proportions, he manages to embue each discrete individual with a full vocal identity, unique speech patterns, inflections and tones, so that I know within seconds if Gansey is sharing a thought, or if it’s his thoughtful tortured best friend Adam, or the angry force of nature Ronan. Patton makes even the romance parts of the story feel deep and meaningful, with out delving into the melodrama that sinks many similarly told stories.

If I can criticize anything about the series, it’s that each book feels inherently unfinished. Although both books follow a clear character arch (in the first book, it’s Blue and Gansey’s, in the second it’s definitely Ronan’s, with both featuring a heavy helping of Adam’s tragedy), the plot is merely inching towards its conclusion. Given how much gets done in these books, it’s hard to feel like this is much of criticism however. Maybe it’s more of a back handed compliment, representing how badly I wanted the next book once I finished.

If you’ve never delved into an audiobook before, this is the one to start with, as much for Will Patton’s delicate vocal triumph as for the beauty of hearing Steifvater’s words read out loud. And if you’re not inclined towards that, definitely pick up the physical book, which far exceeds its genre and ends up feeling more like a classic of English literature than yet another YA offering.