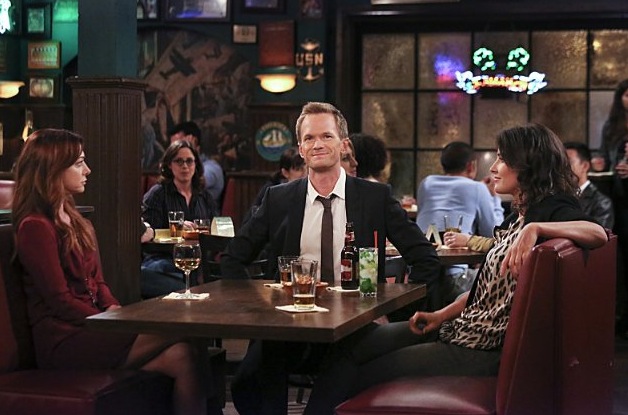 How I Met Your Mother 909 “Platonish”

Since the wedding weekend in How I Met Your Mother world is spanning the whole season, I figured I might as well enjoy the last season as it arrives instead of longing for the independent episodes. “Platonish,” however, reminded me what I’ve missed about seasons past.

First, I want to rehash why the Ted/Robin/Barney love triangle needs to be put to bed for good: we know whom everyone ends up with! This isn’t some twist the writers are trying to throw our way, so why do we have to relive a suffering Ted every single week? I understand that lost loves are hard to get over, but this is television, where love is lost and then quickly found by your best friend.

We get that Ted hasn’t moved on yet, but please let him so we can too.

Sincerely,
Everyone that is tired of dramatic irony.

Love triangle aside, the episode definitely delivered and was thankfully, not a throwaway. While time didn’t progress more than a minute of the wedding weekend, there are answers to questions I didn’t even know I had.

While Robin discovers that there isn’t a button to press to stop crying (even though that would be so convenient) Barney reminisces on the story of how he never completed the “Diapers and Samosas” challenge. Turns out, there isn’t a mission that isn’t possible for Barney when it comes to picking up girls, even after Robin and Lily challenge him to pick one up while talking like a dolphin (I’d give him my number on that talent alone!), while wearing a plastic bag and not saying the letter ‘e’ and while competing with Ryan Gosling (great “Hey Girl” reference). But on his way to run errands that’s disguised as the final challenge, Barney runs into the Mother. Plot Twist! Lily wasn’t the first to meet her. The Mother outright rejects Barney’s attempts at a pick-up ad explains that he’s sad and she gets it. She tells him instead of constantly playing the game, he should try to win by getting Robin back. That’s when Barney says he accepts the ultimate challenge: “Getting Robin to fall in love with me.” I thought this was a perfect way of explaining why the Mother was playing in the band at the wedding, until Barney said he still doesn’t know who that woman was. Seriously who hired the band if not the bride or groom?

We also get an explanation for why Ted is planning a move to Chicago. They could of left it at when Walter White tells you he has a job for you, you do it, but I guess Hammond Druthers is the less menacing version of Bryan Cranston. Mr. Druthers comes bearing a job offer for Ted who happens to be a hot commodity after designing the GNB building. Apparently, Hammond told the partners of his firm that he and Ted were good friends, and he really needs this after designing a glass building that melted and killed a lot of exotic fish (and you thought his phallic building design was bad). Ted promises he’ll think about the offer, but later declines when he sees Robin eating olives and realises that if she can change her mind about the foulest fruit in existence, she can change it about her and Ted’s relationship status. We all know though, that Robin’s mind doesn’t change because she too realises that this story line should have ended when their relationship did. The first time.