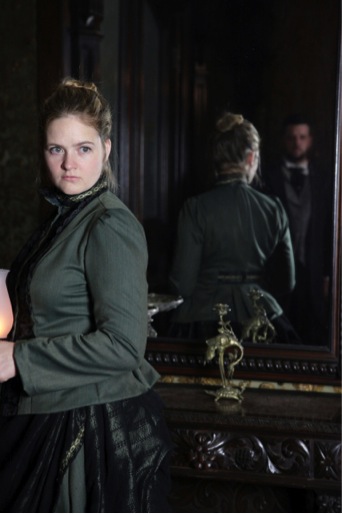 Eerie Suggestion in Simple Machine’s Turn of the Screw

Simple Machine’s production of The Turn of the Screw, adapted by Jeffrey Hatcher from the ghostly tale by Henry James and directed by M. Bevin O’Gara, is very well-acted and very well-executed. The perk of a play like Screw is that everything hinges on only two actors. The dreadful risk of such a play is that everything hinges on those two actors. No props, minimal set, smart lighting, and two people playing all the roles; an exciting and challenging prospect. While I’ll admit I was initially skeptical of the appeal of staging this play in two historic Boston buildings, I was won over when I realized that once the play began all conscious considerations of set and staging could safely fall away, leaving only a yearning to witness the theatrical resolution of the creepy tale.

I attended the November 9th performance, which meant it took place at the Gibson House Museum in Back Bay (the other location for half of the performances is the Taylor House Bed & Breakfast in Jamaica Plain). James’s story may be familiar: a young woman is hired to work as a governess, in charge of two children in a great estate called Bly in Essex, England, with only a housekeeper for company. Plans change when the eldest child is sent back from his boys’ school early, expelled under mysterious circumstances. Soon, supernatural events begin to overtake the estate, events with unclear origins and of a nature that threaten to quite overcome the young governess. The story is permeated with a wretched ambiguity that has delighted readers and audiences for ages. Hatcher’s stage adaptation emphatically eschews the use of any props or set devices that indicate location changes, and instead requires high-caliber performances from the two actors, the Man (Stephen Libby) and the Woman (Anna Waldron), to bring the play to life. The Man alternates between various characters, while the Woman only plays the governess. Libby and Waldron met and exceeded my expectations, and were absolutely wonderful to watch and hear.

Back to the set. Perhaps it is evident why I had reservations about the setting: would the historical surroundings help enhance the theatrical experience, or would they merely serve as a distraction, as a gimmicky crutch detracting from what we should rightfully demand of the actors? The show’s opening did nothing to assuage my concerns: starting us off in the kitchen of the house a floor below the Gibson House Museum’s foyer, where most of the play will take place, was a charming but perhaps misguided decision. The service space was conducive to the emotions underlying the play’s opening interview between the children’s uncle and the governess, showcasing his unquestionable authority, the mysterious nature of the position, and her eagerness and susceptibility to his charm. But I found it distracting. In the intimate space, my eyes shifted to the ushers who remained standing in the room and to the other audience members; predictably enough, as we stood and followed the governess upstairs after this single scene, it was not the most elegant of transitions back to the foyer, where the actors did not continue to perform until everyone finally found their seats.

To my relief, this was the only pragmatic example of the setting interfering with the performance. I settled into my own seat and took in my beautiful Victorian surroundings. I looked at the gorgeous gold-patterned wallpaper, the carpeted staircase, the polished chandelier, the hallway leading to a darkened dining room, and wondered what effect these sights would have. Not until my eyes resettled on the performers did I realize that, despite our lush milieu, the actors were still filling a certain kind of void, if not the physical one the text of the play explicitly lays out. Performing in Downton Abbey itself wouldn’t be enough if the actors didn’t make it worthwhile.

The Man’s effectiveness depends entirely on his ability to embody many characters. Libby shifted between roles brilliantly, not just in voice (though his vocals are superb, my compliments to Liz Hayes, the dialect consultant), but also in gait and posture, bringing to life the master, housekeeper, and boy, often in swift succession. There were also many interesting visual choices, small details that made subtle impacts. To watch the Man slowly lose some of the outer trappings of propriety (his coat, his cravat, his vest) as the play progressed was to get a visual sense of how the narrative of normality was beginning to unravel at Bly.
Which brings us to our heroine. I could not keep my eyes off of Waldron’s face: the eagerness in her expression slowly distilled into uncertainty, doubt, fear, hysteria, and, finally, fearful zealotry. If the Man’s role demands character versatility, the role of governess demands unflagging, steady energy, as well as great moments of release and control, and Waldron successfully delivered, her upright pious governess panicking as the walls began figuratively to close in. Watching Libby and Waldron in the dim light of that Victorian house, I found myself leaning forward keenly, like a rapt guest listening to an after-dinner tale by the fire, holding a cup of tea long gone cold. Satisfy your own curiosity, and attend this gothic thriller as soon as you can, as seating is quite limited. Attend! That is, if you dare.