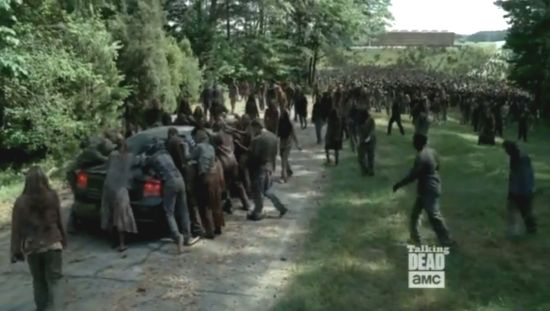 The Walking Dead is only three episodes into the new season, and already the entire prison settlement is at imminent risk and the survivors have started killing each other. The mysterious illness has begun to sweep through the jail and people are getting sick very quickly. The decision is made to establish a quarantine area in order to halt the spread of the sickness. Things have not gone well for the first inhabitants of the quarantine building, Karen and David, as the episode begins with Tyreese discovering their burnt corpses. Rick and Daryl quickly arrive at the scene, as an enraged and nearly psychotic Tyreese demands that Rick use his cop skills to find the culprit, and then allow him to dish out some frontier justice. Their frustration boils over and a brutal fist fight breaks out between Rick and Tyreese, which is actually a recreation of a famous event from the comics.

As Rick investigates the murder of Karen and David, People Champion Daryl organizes a group to travel to a veterinary medicine factory Herschel is familiar with, in hopes of finding any supplies to combat the sickness. Daryl, Michonne, Bob, and a reluctant Tyreese leave the prison and drive towards the factory. As they get farther away, the radio suddenly begins to crack with static, and a lone quiet voice starts to speak. The group struggles to hear the words, something about survivors, and sanctuary and –HOLY CRAP ZOMBIE HORDE! Daryl drives through a collection of Walkers on the road and screeches to a stop, only to find themselves in front of literally thousands of Zombies, all coming their way. Daryl throws the car into reverse, but the wheels quickly become stuck on Walker corpses, in the bloodiest ever attempt to gain traction. They abandon the car, except for Tyreese, who sits in a daze as the walkers surround him. As the group shouts at Tyreese, all his anger and frustration builds and builds, until he springs from the car and attacks the zombies as they swarm around him, mimicking another famed moment from the comics. The other three run into the woods, fighting off more Walkers, and a few minutes later are joined by a bloodied, but alive and unbitten, Tyreese. The four begin to make the long journey back to the prison, without any medicine, only with more questions.

Rick and Carol have spent the day trying to keep the prison running, and the fact that they still have to struggle to get water despite the illness all around them is great a reminder of their daily hardships. At the scene of Karen and David’s murder, Rick finds a small bloody handprint, the sight of which leaves him particularly distressed. As the episode ends, he asks Carol if she murdered them, and she barely hesitates before telling him that she did. This seems like an extension of Carol actions from the previous episode, where she extolls others not to show any weakness or hesitation, and be prepared to make difficult choices. Rick seems surprised at Carol’s coldness, while she appears to view it as a sad necessity. Unless, maybe, she’s covering for someone. DUN DUN DUUUUNNNN. Either way, it’s Rick who now faces the difficult choice regarding how to deal with Carol’s actions, and what to do when Tyreese finds out.

Character Spotlight: Herschel
Herschel Greene is the conscience of The Walking Dead, in a world filled with depravity he is the character who has held onto his own humanity to the fullest extent. When the character was first introduced he was a saving grace for the survivors: someone with actual medical knowledge. Yes his experience was primarily limited to horses, but it was better than nothing. He saved Carl’s life, back when he was an annoying kid who got in the way of everything and not the loveable mini-sociopath he is now, and gave the survivors a place of refuge. He trusted a group of filthy, bloodied strangers to be around his own family. And Shane’s (remember Shane? What a dick) first instinct was to forcibly take over the farm, and it was only the rise of Ricktatorship and an unleashed zombie horde that prevented it. But, then, Herschel’s farm was burnt to the ground, members of his family were killed, and all of Herschel’s efforts to maintain some resemblance of civilized society seemed to be for not. And this was before he was bit by a Walker and had his leg cut off.

In short, Herschel has been through the ringer, like just about every other character on The Walking Dead. Herschel, however, reacted differently than most of the other characters and instead of becoming a borderline sociopath (Carl, Carol, Shane), or angry and vengeful (Rick, Michonne), or filled with constant melancholy and the infinite will-zombies-kill-my-lover-sadness (Glenn, Maggie), Herschel has remained steadfastly true to his core principles. Herschel believes in trust, forgiveness, and charity. He is by far the most altruistic of all the survivors. Yes he did have a crisis of faith after the destruction of his farm, but instead of choosing to give into his lower base instinct in the face of such brutality, Herschel made the choice to believe in his own humanity. It makes sense that Herschel would enter into the quarantine building and treat the sick. He sees others in need, and his is compelled to help them, even at great risk to himself. This was the first thing viewers ever saw Herschel do, when he helped an injured Carl and took in a group of strangers. Herschel is the embodiment of the survivors’ struggle to maintain their own humanity, and now that he has been exposed to the mysterious illness, the future of both is now in question.