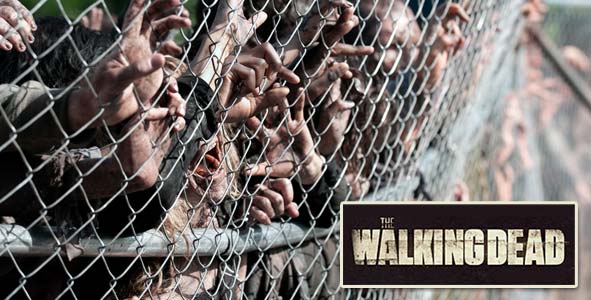 Happiness is a tricky thing on television shows, because happiness is boring to watch. It’s why couples never stay together, why the conspiracy is never really solved, and why Walter White just couldn’t keep his mouth shut. The Walking Dead has faced accusation of low excitement and slow pacing (remember the farm? Man, bleep that farm.) and from the moment season four begins in the midst of relative bliss for the prison inhabitants, we know it can’t last for long. And soon enough, a plague has started to make its way through the prison; people are bleeding from their eyes, dying and reanimating as Walkers.

The first victim to the mystery illness is Patrick, who soon returns as one of the undead and heads right for the cells full of sleeping people. It’s still too early to kill off a main character, so the first person to get chomped on is Beardy McNewguy, and soon enough there is a group of Walkers inside the secure prison. Panic breaks out, as Rick, People’s Champion Daryl, and others spring into action to wipe out the zombies. The attack was too quick however, and a number of people were killed, including children. And after at least of month of stable life, the prison has become just as dangerous as the outside world.

Rick puts his former police skills to good use, and steps away from the farmer role he had assumed, and deduces that Patrick was the first walker, and an inspection reveals that he doesn’t have any bites. He wasn’t attacked, he just died. Rick notes that his pigs were getting sick, and right on cue Karen, lady-friend of Tyreese, starts to cough. It’s a disease, and the group realizes that everyone who has been exposed needs to be isolated before it spreads more. Karen and another sick person go to the former death row lock for quarantine, well Glenn and Maggie can’t even touch each other. And just as they try to deal with the mystery illness, a horde of Walkers swarm the outside fence, which is about to buckle under the weight. The survivors bolt to the fence and come dangerous close to the undead in an effort to keep up the protective barrier. Rick makes a grim choice, and uses the probably infected pigs as bait to get the Walkers away from the fence. It’s a very effecting scene, full of somber music¸ and the pigs get more of a send-off than some of the regular characters (RIP T-Dog).

The Walkers swarm on the fence was not a mere coincidence, and they find a bunch of dead rats along the edge. Someone has been feeding the walkers, and bringing them closer to the survivors. This unsolved mystery, along with the loss of his pigs, brings Rick back in the main group. He dismantles his garden and burns the remains in hopes of stopping the sickness from spreading further from the pigs. As it burns, Rick pulls out his old holster and revolver, straps it back around his waist, and Farmer Rick is gone. He realizes that he can’t just sit on the sidelines of the prison, and instead still has responsibilities to the gro-OH MY GOD MICHONNE IS CRYING!! SHE HAS EMOTIONS! MICHONNE HAS EMOTIONS! WHAT IS GOING ON?! ?!

Character Spotlight: Carol
Carol has undergone possibly the greatest character change over the past three seasons of The Walking Dead. When the character was first introduced, she was just one more person in the initial group of survivors, along with her asshole husband Ed and their daughter Sophia. Remember what an abusive jerk Ed was? And how great it was when Shane beat the crap out of him? And then he got eaten by a zombie and everyone was happy about it. Carol was forced to come out of her shell, and start to forge a new life for herself and her daughter, free of her husband’s antiquated beliefs and toxic influence. And then Sophia went missing and all the cast spent an entire season looking for her and it turned out she was dead the whole time. Carol spent most of season two immobilized due to fear and panic, she shuts down emotionally, and only her growing bond with Daryl seems to give her any hope. After the loss of her daughter, Carol evolves into the group matriarch, learning medical and weapons skills, and retains her motherly and protective instincts.

With the arrival of the former Woodbury citizens, including several children, it makes complete sense for Carol to become the den mother of the group. When season four begins, she is a caring teacher, who appears to give the kids some sense of normalcy and comfort with storytime. Soon, however, it’s revealed that she also uses storytime has a way to teach the kids to use weapons and other survival skills. She’s not teaching them their multiplication tables; she is teaching them to be little warriors. Carol, along with everyone else, was completely unprepared for the zombie uprising, and she saw many people die because they simply didn’t know any practical skills to use in the new Walker-filled world. Carol undoubtedly feels a large amount of guilt over the death of her daughter, and she must see her new teaching role as chance to correct some of her past mistakes. If she can teach these kids to survive, they won’t suffer the same fate as Sophia.

No scene illustrates this better when she instructs two young girls to kill their newly zombie-fied father. When they fail to do so, she admonishes them for being weak, albeit in the gentlest way possible. A Walker is just a Walker, she tells them, and the person they once were is gone. This is a natural extension of her reaction to Sophia fate in season two. When Sophia is revealed as a Walker and quickly killed, Carol doesn’t mourn too greatly, as she explains that her daughter had already been dead for a long time. Carol has lost everything she once held dear, which makes her understand the realities of the world better than a lot of people. Luckily for her, Carol found a way to turn her experiences into something that can help others, and she is determined that children will not grow up to be as weak and helpless as she once felt.