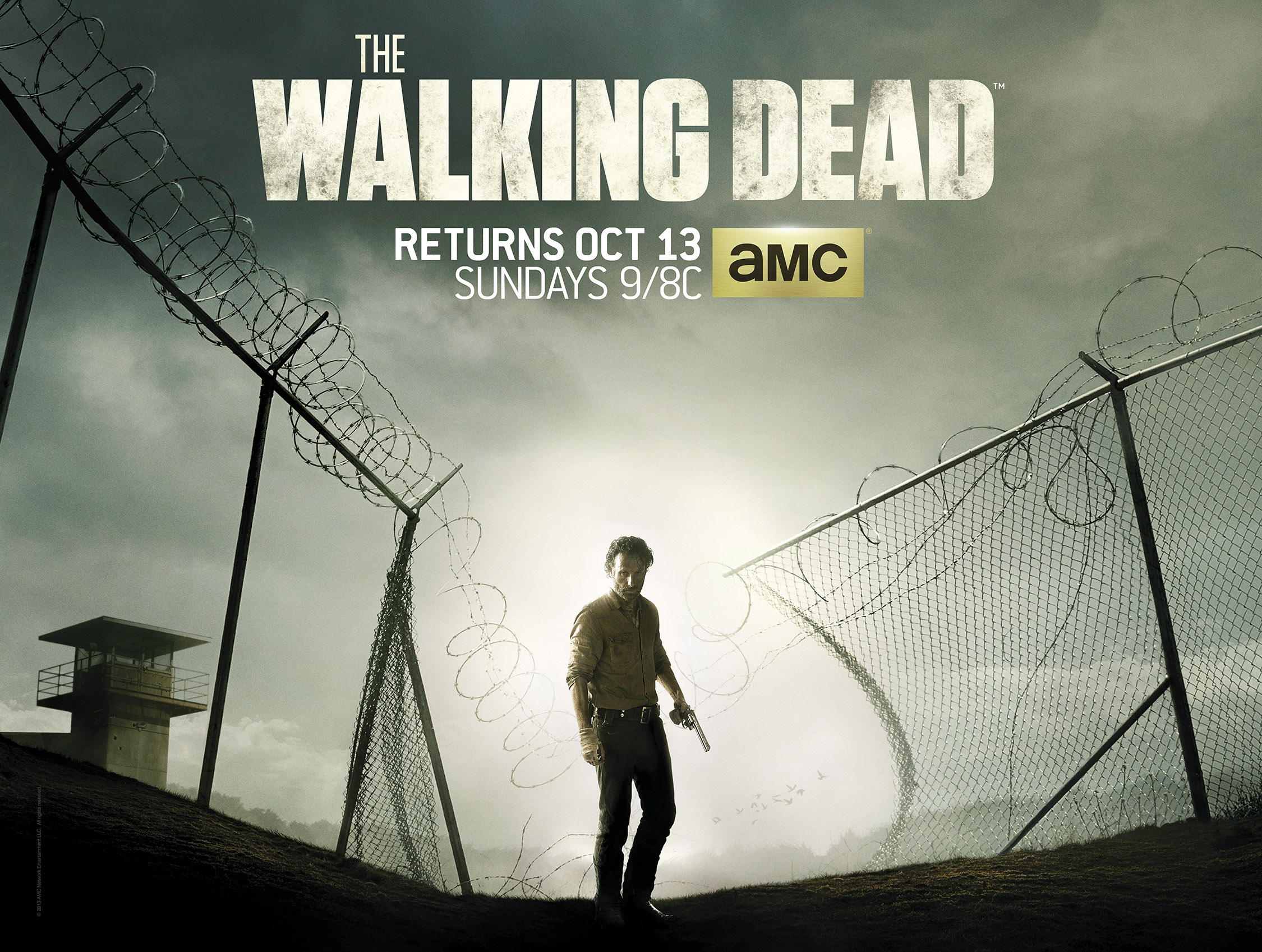 Now we return to The Adventures of Farmer Rick and The Good Times Gang. Today Farmer Rick will show us the best way to grow your own crops, avoiding all those harmful chemicals and pesticides that you’ll find in –OH CRAP ZOMBIES! And with that, The Walking Dead has returned for another year of zombie fighting goodness, and, if this episode is any indication, the fourth season will continue to improve the show and explore the depths and intricacies of a post-zombie world.

This episode picks up several months after the third season finale. The community has slowly recovered and rebuilt after the Governor’s attack on the prison, and the former population of Woodbury has been integrated with the main group of survivors. The first few scenes are really about setting up the new status quo, and the new and somewhat surprising roles that people have filled within the expanded prison community. Rick has abdicated his leadership role and turned to simpler tasks, but more on that in a minute. Glenn and Maggie are still a couple, Carol is now a teacher, den mother to the young children, Herschel is the village elder, Tyreese and Sasha are no longer outsiders, and People’s Champion Daryl Dixon is the resident rockstar of the group.

After three years of watching a couple of assholes fighting each other and ruining everything for everyone else, it’s incredibly refreshing to see that the survivors have organized a functional society. The disparate groups have shown remarkable effectiveness when they banded together in the past to advance their own selfish and narcissistic goals, so the idea of them finally working together for betterment of the community makes all the previous BS seem even more idiotic.

The main plot this week involves Daryl leading a supply run to an abandoned army camp. This is a routine mission for the group, and highlights Daryl’s growing popularity within the community. The group has come a long way, they joke with each other, they don’t appear constantly weighed down with grim despair, Daryl is still gruff but in a loveable way. It’s like they finally have a little bit of ho-OH MY GOD MICHONNE IS SMILING! DOES EVERYBODY SEE THAT MICHONNE IS SMILING?! WHO KNEW THAT HER MOUTH COULD DO THAT?!?!?!?!?! Anyway, Daryl leads the group to the camp where they have a chance to show off their refined zombie-killing abilities as they make their way into an abandoned shopping mall, all while failing to see the horde of Walkers shuffling about on the roof.  Once inside, recovering alcoholic Bob removes a bottle of liquor from a shelf, but avoids temptation and puts it back, only to have the shelf tip over and pin him under a mountain of booze. It’s a metaphor guys!

The noise sets off the roof-Walkers, and as they shuffle closer together their combined weight starts to break holes through the derelict ceiling. And then it starts literally raining zombies, as they plunged into the store. Some burst like water balloons, while the rest lurch for the survivors. Daryl gets to be his usual badass self, picking off Walkers left and right, while poor Bob is stuck pushing zombies back with one hand. They get the shelf off of Bob, and things start to look up for the group, right until new guy Zack, Beth’s (little sister of Maggie) never seen before survivor boyfriend, gets bit and swarmed by the Walkers. It’s actually a sad moment, as Zack has received more character development in three scenes than some other characters got in three seasons (R.I.P. T-Dog). The most affecting part of these events comes when the group returns to the prison, and Daryl informs Beth of Zack’s death. She is strangely unemotional, informing Daryl that she can’t cry anymore, and is instead just happy that she got to know someone. It’s a bit of a harsh reminder of the state of the world now, where death is such a regular part of their lives, that just the idea of making some connection with someone, even if it’s temporary, is worthy of celebration. This also leads to a bit of an awkward tension filled hug between Beth and Daryl, which brings up all sorts of questions about the age of consent in a post-zombie world. But if you saw the way Daryl looks in those sleeveless shirts, you’d want to awkward-hug him as well.

Oh yeah, and there’s some sort of sickness starting to sweep its way through the prison and the Governor is totally still out there. It won’t be 30 days until the next accident.

Character Spotlight: Rick Grimes
In 82 BCE, General Sulla marched his army into Rome and took control of the Republic. He disbanded the Senate, and revived the title of Dictator, previously only used during wartimes, and consolidated the complete rule of Rome under himself. This came at a time of constant fighting among the aristocracy, whose constant squabbles had derailed the Senate and was threatening the future of Rome. Sulla instituted a series of wide ranging constitutional reforms, and reorganized all levels of government. His goal was to level the playing field between the Senate, the Tribunes, and the Magistrate and the end the power struggle. After one year in office, Sulla shocked Rome by resigning his Dictatorship, disbanding his legions, restoring the Senate, and holding elections. Sulla allowed his constitutional reforms to take full effect with the new elected government, and he retired into private life until the day he died.

Rick is the Sulla of The Walking Dead. He emerged as leader before taking complete control under the Ricktatorship of season three and protecting the group from the attacks of the Governor and his Woodbury soldiers. In Season four, Rick has resigned his position, and left the leadership of the community in the hands of a council made up of Herschel, Glen, Carol, Daryl, and Sasha that would make Aristotle proud. Now he seems happy to till the fields and grow crops for the prison, free of the burden of constant life-and-death decisions, and just listen to a little country music. After the tragedies and near mental breakdowns he’s suffered, it’s actually nice to see Rick enjoy some level of content, and readjust to being a single father. Rick being Rick, doesn’t get to enjoy one bit of happiness for very long.

He leaves the prison to go check the food traps in the forest, where he runs across a woman named Clara. After initially mistaking her for a Walker, due to her haggard appearance, she begs him to help her husband, Eddie. Rick can’t not help people, but he still is not as trusting as he once was. He follows Clara to her campsite, testing her out along the way to see if she’s a threat. Rick’s suspicions proved correct when, once arriving at her camp, Clara tries to stab him. Eddie was turned into a Walker a long time ago, now only an unseen head in a burlap sack, and Clara intended to feed Rick to him. She has gone completely insane during her solitude, and instead and returning to the prison with Rick, stabs herself with the knife. Her last request is that Rick allows her to reanimate as a Walker, so she and Eddie can be together again.

Rick was in a very similar situation last season, when Lori was killed. Rick went temporarily insane, and ignored all of his responsibilities to the group and to his children. When he came to his senses, he still had hallucinations of Lori, even engaging in full conversations with her. It was only through the efforts of the group that Rick was able to regain his faculties, and realize the duty that he had. If Rick had been alone, as Clara was, without anyone else to care for him, he would have likely ended up the same way she did. Clara is a reminder to Rick that even if he escapes the burden of leadership, he can’t escape the past and all the horrible things that have happened. Rick still has a role to play among the prison community, and The Walking Dead will surely not allow its main protagonist to live out any sort of quiet retirement.