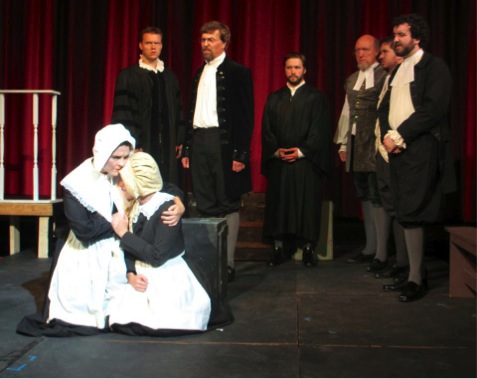 The performance time listed on the company’s web page was the first detail to catch my eye. I have not seen many small theatre performances that list their end time along with their start time, much less list it accurately. But there it was: Saturday September 28th, 2013, 8:00 PM to 10:00 PM. This was to be the first indication of clockwork precision in this tightly-timed, tightly-staged, well-rehearsed production of Goodly Creatures, directed by John Geoffrion, presented by the Hub Theatre Company of Boston.

Goodly Creatures is set in colonial Boston and its surrounding villages in 1634. The Puritan settlers, fleeing from Anglican persecution in their native England, are struggling to stay united amidst the threat of political instability, of budding social and religious upheaval, and of the physical danger presented by neighboring Native American tribes, out of sight but never out of mind. The action of the play centers on Anne Hutchinson (Nancy Finn). The devout, charismatic midwife has sailed three thousand miles in pursuit of her mentor Reverend John Cotton (Jack Schultz), who, in her mind, has demarcated the ideal path of Christian religious belief and practice. Her call for God’s grace regardless of man’s works, a siren’s song dangerously threaded with strands of mysticism, flew in the face of many resident ministers, as well as that of Governor John Winthrop (Phil Thompson). Her distinctly dissident voice was quelled; accused of harming the spiritual health of the community, she was excommunicated and banished from the colony.

William Gibson’s play tracks the spiritual tarnishing of this colony as it strives to be a new Garden of Eden in the wilderness of the New World. It is a complex work to stage: scenes often become confused as characters speak simultaneously and move swiftly about, entering and exiting without warning. The matter they speak is heavy in history, theology, and the socio-economic grievances of Puritan New England, but an attentive eye and ear is all the audience needs to bring to the Hub Theatre Company of Boston’s rendition of this drama. This production was a well-oiled machine; lines and movements were delivered promptly and performed diligently, and the show was brought in at its promised two hours. The economic use of props served the production well, as did the crisp period costumes. It is an interesting choice to stage the play in period dress, considering that Gibson indicated in the Author’s Note of the published play that the costuming should “be abstract, shunning the historical like the plague” (Dramatists Play Service). Geoffrion’s desire to stage this play in its historical city in a historical venue (First Church in Boston) is good motivation to bring the play back to its historical roots; summoning up the perturbed spirits of the past takes precedence over the universality of the plays themes. Of course, there was the occasional conceptual slip-up, even in this meticulous production. How a vaguely square bundle of folded linen could be deemed acceptable to pass (many times!) for an infant child left me puzzled and quite surprised; it was the only bit of lazy staging I could detect, but felt all the more glaring for its singular status.

But for all its technical impressiveness, the animation behind the show varied greatly from actor to actor. The performance was on a mostly bare thrust stage with only a few steps leading to the audience, creating an intimacy with the performers that made their vitality all the more exposed and essential. Some actors stepped up to the challenge better than others. Brandon Grimes as Coggeshall and Robert Orzalli as a stuttering Reverend Wilson were very strong in their prominent roles, as well as in their supporting ones; their booming voices and physical stage presence were energetic yet controlled, and never dull. Craig Houk’s performance as William Hutchinson, Anne’s devoted husband, left more to be desired. His delivery was perfectly timed and smooth, and because of that, alas, perfectly unconvincing.

A strong example of this disparity was in the scene in which the Hutchinsons set up house. William enthusiastically pictures the new house they will build, deaf to Anne’s cheerful attempts to inform him she is expecting a third child. When at last he stops and hears her news, his previous expression of skepticism embodied in the line “Not likely at our age,” is belied by his swift smile and embrace, and even swifter exit. While I am a fervent believer in not dropping pace, particularly in the constant flux of set and scene shifts, I still believe an actor can afford one pause, one genuine break in fluid momentum. In the occasional absence of such moments, the play sometimes felt strangely lacking, all the more strange in the face of its obviously talented execution.

The greatest example of this doubtful animation could be seen in portrayal of John Winthrop. In a sense, Winthrop serves as the play’s narrator. As he opens and closes the play, we are witness to how his oft-quoted dream of Boston as a “city on a hill” sours in the midst of man’s spiritual ambition and subsequent corruption. Unfortunately, while Thompson’s performance seemed correct in every measurable sense, his Winthrop always remained inscrutable at best, a bit flat at worst. One could almost see Thompson mentally counting figurative steps in the final moments of Act I, as Winthrop’s frustration and weariness build up to the intermission and pour over into Act 2.

This disparity between execution and vibrancy was evident as Winthrop and the young Henry Vane (Morgan Bernhard) hit the campaign trail for governorship of the fledgling colony. I wished that these two candidates could have displayed passion similar to that seen in their “crowd” of supporters. At that moment, it was hard to understand what the multitude saw in these two political figures, hard to feel what all the fuss was about. If either candidate drew support from the crowd due to his rational magnetism or personal charisma, or due to the serious theological, political, and economic issues at stake, as one would expect, this audience member certainly didn’t feel it as she gazed at the two figures on the platform.

This raises the question: can you focus on flawless delivery while also trusting yourself enough to let the character’s energy and passion shine through? Can you have your cake and eat it too? Yes, you most certainly can, and Nancy Finn certainly does in this production. Her Anne Hutchinson is the best example in this show of how energy, dynamism, and spontaneity do not come at the cost of losing dramatic timing or impeccable staging. Finn slips seamlessly into her character as she finds herself situated at the center of a political and religious maelstrom. She is not afraid to fuel her character with fire; Finn did not merely articulate her lines, she lived them. And this unfettered display of talent cannot be attributed to her character’s inherently greater complexity and centrality to the play: Brashani Reece’s performance of Mary exuded this same boldness, whether she was nervously treading through a dark night with Anne or cowering in fear, shame, and sorrow on a courtroom floor. These two women never left me doubting what was at stake.

Gibson’s play explores the tenuous division and the precarious balance between order and chaos in the early days of Massachusetts Bay. While this production could have benefitted from relaxing its hold enough to let more energy slip through its fingers, Hub Theatre’s show is undoubtedly impressive in its staging of this challenging, often overlooked play. If this is only a taste of its first season, then we can safely anticipate plenty more delectable dishes to sample from the Hub Theatre Company of Boston in the future.