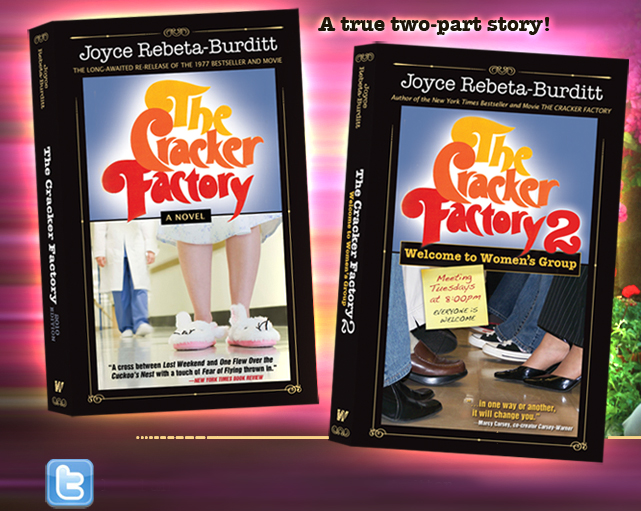 Our Favourites: Rebeta-Burditt’s The Cracker Factory

This autobiographical novel by Joyce Rebeta-Burditt was a national bestseller when it was first published back in 1976.  Immediately referred to as a female One Flew Over the Cuckoo’s Nest, it became instantly popular but, unlike Ken Kesey’s book, it did not become an enduring classic. This is odd to understand, because re-reading it after several years, it strikes me again as having a singular warmth and humanity to it that Kesey’s masterpiece lacks.

Perhaps that Kesey’s novel was published first and because the (predominantly male) critical establishment of the time could identify more comfortably with a male dystopian world view, was and is the reason that Cuckoo’s Nest’s popularity has not waned over the years.  It is also possible that the critics had an easier time understanding the long-established paradigm of a lone rebel perishing against the system, than they did grasping and accepting the highly intense view of a woman slowly reclaiming her life and self-respect.  Whatever the reason for The Cracker Factory’s lack of sustained popularity for the last 35 years,  it’s a pity, because it stands out as one of the great American bildungsromans, albeit in the slightly unusual form of a confessional from a wisecracking, alcoholic, 28 year old Cleveland housewife and mother of three.  Whereas Kesey’s novel was a brilliantly cold, savagely satirical attack on the establishment, Rebeta-Burditt’s novel is a frequently laugh-out-loud, agonized portrait of one woman’s intensely personal struggle with addiction and the achieving of self-identity.  To put it plainly, Randle Patrick McMurphy may know exactly who he is in his war against Nurse Ratchet, but Cassie Barrett hasn’t a clue who she is in her war with herself, and her battle with her demons is far more terrifying than anything the often obtuse hospital staff could dream up for her.

In this Oprah age, full of self-help books, confessionals of addiction,  and novels of abuse, mental illness battled and overcome, it may seem to some that this story is old hat.  As difficult as it may be to believe now, it’s important to remember that there was a time when this sort of thing was just not spoken about, much less the subject of best-selling novels. In truth, Rebeta-Burditt’s book was one of the first that actively confronted this (up to then) taboo subject of women’s addiction and its role in gender identity. The novel came out in the popular zeitgeist of the women’s  movement in the mid 1970’s, and it sparked an immediate and passionate response in women of all ages, everywhere. Confessionals of women’s addictions had been around  in books and in the movies for years, and but they all seemed to say that if woman found love with the right man, domesticity and children, then her life would be complete and the destructive behaviour would stop. The Cracker Factory turned that claim on its ear, and not only refuted it, but with singularly searing invective insisted that the assertion was never true to begin with.

Many books have since been written in this hilarious feminist confessional vein, such as Cat’s Eye, Fear of Flying, Girl Interrupted and Postcards From the Edge (to name just four) but few have been so personally affecting as this first-time novel by Rebeta-Burditt, now a longtime screenwriter and producer living in California.

Cassie Barrett, our hapless protagonist, is first discovered (as she describes it) lying in the fetal position in the Shaker Heights hospital psychiatric ward, with a hangover the size of Cleveland itself, and with the humiliating knowledge that her world has bottomed out once again. Out on a bender the evening before, she attempts suicide (overdosing on St. John’s Aspirin for Children) but her husband and mother foil her plans, only to dump her in the psychiatric ward of the local hospital for the 2nd time, seemingly relieved to wash their hands of the errant daughter and spouse. Cassie is a screwup, no doubt, and when we first meet her, she’s on the edge of the abyss once again, all but going under again for the last time. However, even in these dire straits, her saving grace is her humour, and from the first paragraph we are treated to her hilarious combative zingers and her breathtaking verbal arabesques. This woman has a mouth on her like a Howitzer, and she does not hesitate to turn the cutting edge of her rapier wit on anything or anyone. From her scathing putdowns of her least favourite nurse, (“You should hire out as a blimp, Pomeroy. They could paint DRINK BUD on your side, and float you out over the stadium during ballgames. You’ll never hear me say I have a hangover, not while you stand there looking vastly superior and grossly obese.”) to her daily battles with her psychiatrist, (“See you tomorrow.” He said, walking out. Thanks for warning me, love. I’ll be up all night soldering my armour and oiling my crossbow for tomorrow’s joust.) Cassie fires off one-liners with the desperation of a woman hanging onto a slim thread, and who can see quite clearly into the chasm below,  knowing that if she ever stops talking, she could lose her grip and be lost. In her more quiet moments, she is grimly and fully aware of the stakes she is facing, and fully realizes that this may be her last chance at survival. As she soberly admits to her brother in a letter, “This game is more important than most, and the losers often die, or wish they had.”

Rebeta-Burditt’s writing is razor sharp, and there is a surprisingly subtle romantic sensibility at work here that preserves the heroine from ever slipping into vulgarity and self-pity and therefore out of our sympathy. Not that she isn’t periodically vulgar and self-pitying, but it’s born out of an easily understandable frustration and despair, and so we forgive her, simply because we can see ourselves reacting the same way in similar circumstances. This is perhaps the secret to the character’s charm, because in spite of the indignities she suffers, whether self-inflicted or otherwise, Cassie has an instinctive grace and humour and a surprisingly rock solid core of common sense that keeps us enchanted and convinced of her veracity, and gives the novel its drive and push.

Critics at the time, looking for an easy description, compared The Cracker Factory as “a cross between TV’s Rhoda and One Flew Over the Cuckoo’s Nest”, but the comparison was too facile and singularly inaccurate, and ultimately unfair to Rebeta-Burditt’s novel. If comparisons (which can be odious) must be made, I would say this book is closer to Jane Austen than to Ken Kesey in its feminist spirit.  That is of course, if Elizabeth Bennett were a frustrated Cleveland housewife with three kids and a drinking problem in the late 1960’s, married to a distant and hassled Mr.Darcy.  If the novel is short on plot (will the heroine recover and get her life and sanity back or won’t she?) it is nonetheless full of an hilarious, often heartbreaking cast of oddballs, lovers, family and friends, thus giving a heart’s eye view of a life vigorously, if  haphazardly lived. Rebeta-Burditt’s greatest gift in this novel is Cassie herself, and she is presented with such a thoroughly realized three dimensional viewpoint that the character is staggering in her emotional complexity, consistency and fullness.

Like Huckleberry Finn, Holden Caulfield, Scarlett O’Hara, and other classic American characters that seem to live beyond the printed page,  Cassie’s voice is so surely and uniquely her own, that we believe totally in the truthfulness of her reality, she is that endearing and that convincing. Stepping away from that infatuation for a moment is to realize with a not-too-little amount of awe the remarkable effort it takes to create a character of such breadth and depth of feeling.  In an era of over the top superhero blockbusters, and endless fantasy epics, it is a little humbling to realize that the journey of such an ordinary woman can serve to remind us all that even in the most seemingly mundane of lives, true greatness and heroic conquests can still be achieved. Even, as it turns out, while riding quietly on the subway to pick up Christmas presents for the kids.

In charting Cassie’s recovery, Rebeta-Burditt handles the frequent jumps between humour and pain with effortless ease, sometimes within the span of the same sentence.  It is perhaps this ease which gives a clue to the novel’s power; like life, the comic and the tragic frequently intersect at the most inopportune moments, making them seem all the more believable. The comic scenes are truly hilarious and when juxtaposed against the often desperate poignancy of Cassie’s plight, (some scenes of which are quite painful to read) the novel has much more depth and scope than one might reasonably expect out of a story where so little externally happens.   It is this evenhanded control that is one of the novel’s greatest strengths, and if Rebeta-Burditt’s pace never flags, even in her quietest,  most introspective moments, neither does she stint on emotional impact in the interest of getting on with Cassie’s story.  In the unending struggle to deal with and understand the vagaries and vicissitudes of her existence, Cassie’s journey is marked by a constant imperative to define her life and who she is on her terms. Since she really has no idea of what that is, the ability to actually achieve identity is not easily won, and she learns the hard way that the battles of personhood can be bloody and debilitating. These often violent road bumps in her path parlay seamlessly and believably with the novel’s humour as our heroine navigates the often rocky shoals of selfhood.

That she suffers setbacks in understanding while making a potroast and gleans insights while Windexing the windows are every bit as poignant and important and personal to us as Huck Finn realizing Joe’s humanity on the raft, or Scarlett O’Hara’s famous “as God  is my witness” speech over that infamous radish patch.  Cassie, like them, is us. This perhaps, is The Cracker Factory’s most winning achievement. As the heroine herself says, “It takes a long time to become a person. Longer than they tell you.” In Rebeta-Burditt’s expert hands, the hilarity and heartbreak of Cassie Barrett’s personhood will stay with you long after her journey is completed.