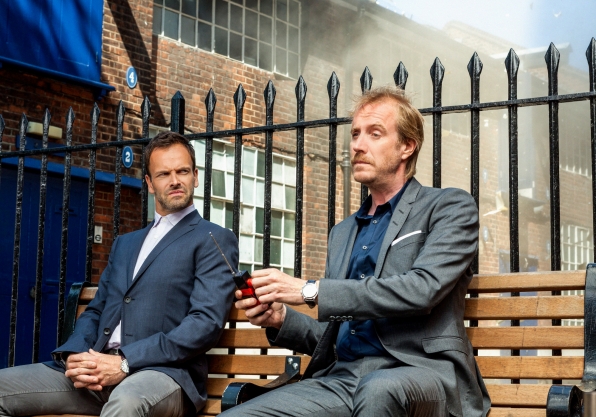 The episode started in New York, the show’s usual setting. But Sherlock (Jonny Lee Miller) got a call that his old colleague, Lestrade was in trouble, and was summoned to London to help. While the subsequent cramming in of location shots was a little unnecessary- okay, you did an expensive location shot, we get it- they included 221B Baker Street, and that made the Sherlock Holmes nerd in me very happy.

The depiction of Lestrade’s character as a disgraced detective was an interesting one. That’s one of Elementary’s great strengths: it is brilliant at taking the original source material, and reimagining it to fit a modern world. (Last season’s Moriarty and Irene Adler arcs were perfect examples of this). Elementary strikes a delicate balance of using enough of the original stories to keep fans of Sherlock Holmes happy, but it takes risks and makes the story its own. In Lestrade’s case, their risk paid off.

My favorite part of the episode though, was the introduction of Sherlock’s brother, Mycroft, played by Rhys Ifans, in an inspiring bit of casting. Ifans and Miller had amazing chemistry, and were very believable as brilliant man-children, who can’t help but bicker. There was an immediate sense of an established, and complicated relationship buried beneath layers of immaturity and pettiness. Ifans also had a few very good scenes with Lucy Liu (who plays Watson), which were a nice reminder that he is not only good at playing outlandish, comedic characters (I always remember Ifans as the weird roommate in Notting Hill, and as Luna’s dad in Harry Potter), but that he is also more than capable at bringing seriousness to a role.

While this episode was great, I can’t wait for Holmes and Watson to return to New York. They were separated for most of the episodes; Holmes worked with Lestrade, and Watson spent time with Mycroft. Their relationship is the driving force behind the show. Miller and Liu work incredibly well together, and are one of the best duos on television right now. The episode felt a little off with them spending so much time apart.

The other notable problem with the episode was, bizarrely, Holmes and Watson didn’t feel at home in London. Elementary has done such a good job of ingraining New York’s character into the show, and it felt weird to be in another city. It was a nice pilgrimage of sorts, having the characters return to their original incarnations’ city, but as I’ve said before, Elementary does its own thing, and that’s what makes it so good.

That being said, I do hope that’s not the last we’ve seen of Mycroft. He seemed determined to build a stronger relationship with Sherlock. Assuming Ifans has time in his schedule, it’s not unreasonable to think he might come back someday for another guest episode or two. But for the time being, the prospect of Holmes and Watson continuing to solve crime and share more screen time is more than enough reason to be excited for the upcoming season.