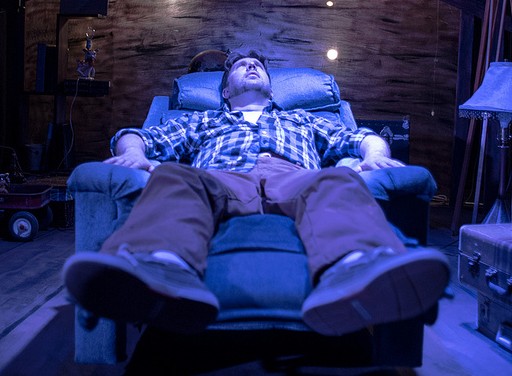 Flat Earth’s Rocketman by Steven Dietz is out of this world. I’m glad to see Lindsey Eagle directing again, I have fond memories of IDS and she is a truly talented artist with a skilled eye for the small moments between people (her production of The Shape of Things is still one of my favorite productions I’ve seen since moving to Boston 5 years ago). Rocketman has a tight script and pacing, the production is beautiful, and I was moved watching it – I don’t know what more I could want from a show.

It starts with the attic. The set had such warmth to it that you could easily imagine the type of life that led to having such an attic. The exposed beams of the ceiling served the dual purpose of showing us the dimensions of the small room and evoking the image of being unfinished. It’s gooey filling of boxes, dusty trinkets, and unused furniture struck home the idea, before the play even began, that the attic was unfinished but not under construction. The room itself was part of the unused life it housed. As the show progressed the pointed ceiling continuously drew the eye upward. The only sadness was that I could not see the specific characters created for this production reflected in the trinkets of the attic.

Donny, played by Robin Gabrielli, spent long moments picking at the contents of the room. Sometimes it seemed absentminded and other times with a purpose, but he always appeared aware of his surroundings. His family seemed less interested in what memories the attic had to offer. I can never fault an actor being engaged with their scene partner, and it might be my own nostalgic expectations, but I hoped to see that helpless wonder of falling down memory lane from just walking in the room.

Time and how we perceive it was the driving force of the play. The assertion that there is a window of opportunity for things, and that the window will shut and the time will pass, hit me like a brick with a threatening message. I hope it is a human touchstone, a token of mortality, that reminding us of the time we will never get back gives everyone a chill. I can hear myself making those choices. “We can’t take that vacation now, we don’t have the time/money. We can do that later, there’s plenty of time.” We can have a honeymoon when we have X is what I tell myself at night. This all leads to me weeping in the theater as Donny and Rita discuss their missed honeymoon in terms that sound too familiar. Message received.

Hyperbole aside, the theme of time was central to all of the characters. In the first half of the play, Rita (Korinne Ritchey) seemed like the only character to have seized the choices offered her. Donny was stuck regretting the things he has never accomplished, while Buck (Scott Alan) appeared to have given in to the loss. Juliet Bowler as Louise was proof in the sarcasm pudding that the window closes. Louise and Donny’s unfulfilled relationship hangs over them like a sword, but Louise repels the strike with shield of control and the immovable assertion that the time has passed for them. Juliet was a standout in this already strong show. Her opening speech listing the things she would do for a good night sleep – including drinking shampoo or marrying another lawyer – had the whole house in stitches. However, Mariagrazia LaFauci as 16 year old Trisha was a tough contender for my favorite person onstage. She captured the essence of adolescent frustration without reaching for the insipid caricature of “playing” a teenager. She was sincere and heartbreaking. The scene with Trisha and Donny reconnecting in the attic, and the subsequent fervor with which she insists the events ending Act 1 were an accident, were the source of much of that weepy feeling I admitted to earlier. She also had the best transition from Act 1 to Act 2.

Ok, the big twist: Donny’s desire to escape his life and reach the stars, reaches a highpoint at the end of Act one. This moment is wondrous. I don’t always expect greatness from small theater tech – but this was a great tech moment. He lies back in his chair and pushes the walk sign to cross over, into another life, into heaven, into the stars. The moonlight coming into the attic goes out as darkness and a rushing sound overtake the audience. It sounds like a rocket blasting off; it sounds like death rushing in your ears. The lights flickers and glass tinkles somewhere far away. Then we are in a different reality. It’s not Donny stumbling around transported. We the audience are seeing a different reality where Donny didn’t divorce Rita, didn’t forget Trisha’s birthday, and didn’t give up on his dream of landscape architecture. Oh, and in this reality, people age backwards. This is done beautifully. There is no exposition block telling us what happened, or overly-complicated explanation. It’s just part of the world that you get progressively younger and more innocent until childhood overtakes you. Trisha becomes the most experienced person in the room, having gone through a career and marriage. Her knowing smile was such a natural transition from her mature teenager mirror that it cast the other bumpier transition into clearer light.

Louise’s sharp approach fit less with the new reality, and I never quite understood the intersection of God and the cosmos. The religious side seems in conflict with the multi-verse sci-fi that’s happening. The beauty of the world rests on mirroring the stars to the land, and dreaming of bigger worlds – according to Donny and later Trisha. Louise feels quaint with the religious reminder. Juliet sells the hell out of it, so I didn’t figure out what didn’t work until after the show. But once realized, it was difficult to look past the question of “why is this here?”. It doesn’t help that Buck’s ark obsession is played for laughs. ‘There’s a crazy guy who wants to build an ark’ is funny and strange but Donny wanting to go to space is beautiful and deep. Scott Alan played a hilarious turn as Buck in the first half, but the new reality distorted the sweetness. The great-yet-uncool friend of Act 1 is presented as a mildly crazy, naïve, creep. Ok, you’re friend’s weird, but isn’t it concerning to anyone that he recounts long tales of Ark adventures? Did this actually happen in some other reality? Is he a child playing pretend? It didn’t sit right with me, which was a shame since I liked character so much. Rita on the other hand, relaxed into her second personality. Korinne did an admirable job as business Rita, but never seemed at home in the business suit and stern face. The emotional weight she was carrying felt sincere but the older attitude seemed forced. As younger more open Rita she flourished, including the last scene between her and Donny that brought back that weepy feeling.

The actual ending of the play, I’m willing to admit, confused me. As far as I can tell, the last scene is a third reality. Expanding on the multiverse, we see a glimpse of another reality where the problems Donny struggles with have been resolved – he made a different choice. This unfortunately complicates my feelings on the show. If there are multiple realities where you make every choice in one or the other, then what does that imply for the suffering you cause with those choices? My theater companion thought it might be the result of choices made between the two realities. Louise is finally asleep, and Donny is finally doing his work; on some level it doesn’t matter the exact science of where in time and space that happens, but damn it Lindsey Eagle, you made me care about the other characters so much – I want to know!