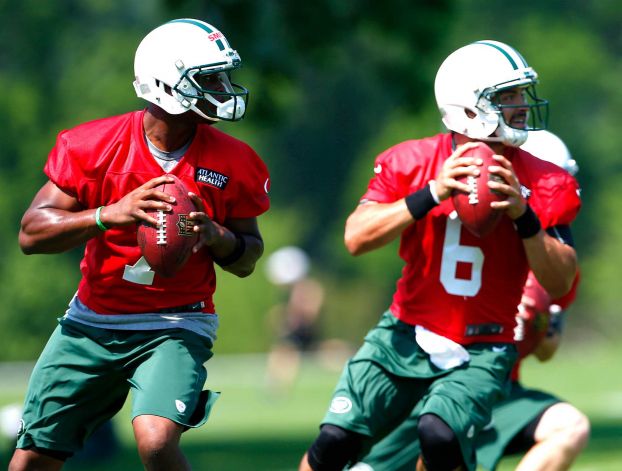 The NFL has developed into a quarterback-driven league; to win, a team must have a special quarterback. Every year there are some shoe-ins who have the starting job for their team; however, for some teams, every new year brings with it a quarterback competition at training camp. The biggest quarterback battle this year  is Mark Sanchez vs. 2nd round pick Geno Smith. Another, Michael Vick vs. Nick Foles. Lastly, Blaine Gabbert vs. Chad Henne. Although there are only three competitions that stand out, there is always a chance that a young quarterback can break out at anytime throughout the pre-season and stun the coach, earning a starting position ala Russell Wilson.

The battle in New York is the most entertaining and the Big Apple is exposed to the media more than any other team in the NFL. In the red corner we have Sanchez, a former 5th overall draft pick who seemed to be the future of the Jets. However, after leading the Jets to three post-season appearances in his first two seasons, Sanchez has struggled mightily the last two seasons; last year throwing for less than 3000 yards, and just 13 touchdowns with 18 interceptions.  In the blue corner we have Smith, the 37th selection in the draft. Smith was ranked first among quarterbacks by most in this year’s draft class and slid into the 2nd round where the Jets opted to select him in an attempt to push Sanchez in camp. Smith had a great career at West Virginia throwing for over 8,500 yards in his junior and senior year compiling for 73 touchdowns and 13 interceptions in just 26 games. The job is certainly Sanchez’ to lose but Smith will definitely push Sanchez to the brink and try to claim the starting role in New York.

Vick vs. Foles in Philadelphia is going to be watched closely as first year Head Coach Chip Kelly gives them both a chance to start come week 1. Vick had an amazing season two years ago after a two year hiatus from the NFL after being convicted for dog fighting and spent two years in prison. In 2010 he threw for over 3,000 yards with 21 touchdowns, and just six interceptions. While rushing for 676 yards with nine rushing scores. Since then Vick has struggled to stay healthy and keeps turning the ball over. Vick had 10 interceptions in 10 games last season while also fumbling seven times. Foles was selected in the 3rd round of the 2011 draft and played seven games last season due to Vick’s inconsistencies and health issues.  He was able to muster up 1,699 yards, six touchdowns, and five interceptions in his rookie year. However, with Andy Reid as the coach, Foles started the final few games of the season and shut down Vick for the year. It was almost a lock that he would be released at season’s end. But with Chip Kelly’s high intensity offence, they kept Vick. Early in camp this battle seems like it’s starting to lean towards Vick.

Gabbert vs. Henne will also be an interesting competition in Jacksonville. Gabbert was the 10th overall pick in the 2011 draft and has not been the answer at quarterback they were hoping he’d be. Struggling in his first two seasons Gabbert hopes that the third time is the charm since he has been given numerous chances to claim the starting job for the Jaguars. In his rookie season Gabber threw for 2,214 yards, 12 touchdowns, and 11 interceptions; followed up by a sophomore campaign that consisted of  1,662 yards, nine touchdowns, and six interceptions in an injury-riddled season that limited him to just ten games. Meanwhile Henne was the better of the two last season throwing for over 2,000 yards with 11 touchdowns, and 11 interceptions. Henne heated up the final few games of the season as the final two games he threw for 646 yards and developed a good chemistry with 2012 first round pick Justin Blackmon, and breakout player Cecil Shorts. If Gabbert was not a top ten pick, Henne would be first in line to start week 1, but being a top pick, the Jaguars are almost obligated to give him the chance to flourish this year with a revamped O-line that will feature 2nd overall pick Luke Joeckel and Eugene Monroe as bookend tackles ready to protect the edge. In a perfect world, where stats were the only thing that mattered, Henne would be in the lead; however money plays a crucial role in the world of sports giving Gabbert a slight edge to be the guy come week 1.

With pre-season underway, coaches and management will better evaluate their personnel. Each player will be evaluated and assessed and only time will tell who emerges as the starting quarterback come the start of the regular season.