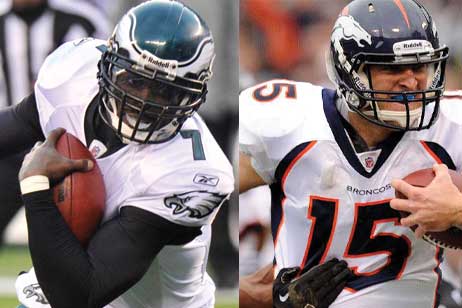 Where is the Option?

The read-option offense took the National Football league (NFL) over by storm this past season. A shift in thinking from the NFL brain trust to maximize the skills and talents of the young superstar Quarterbacks that are in their first and second years such as Cam Newton, Robert Griffin, Russell Wilson and Colin Kaepernick. The use of this offense should open doors for two of the NFL’s most notable faces Tim Tebow and Mike Vick. Both Mike Vick and Tim Tebow are better at using their feet than passing the ball, which would be perfect in an offense like the read-option which requires it’s Quarterbacks to be mobile and run more often than not to create plays. Instead both players’ careers are in limbo.

Mike Vick has been the starting Quarterback in Philadelphia the last three years where they just hired college coach Chip Kelly to become their Head Coach. The Philadelphia Eagles having moved in a youth direction and Mike Vick being 32 years of age plus being owed 7 million dollars if he plays for the Eagles, make it highly unlikely that he is on their roster come the start of training camp. Whether or not Mike Vick is on the Philadelphia Eagles roster many expect- myself included- that he will be on someone’s team whether it’s as a starter or backup role.

Tim Tebow on the other hand will be lucky to have an NFL job next season unless he considers a position change due to the embarrassing way the New York Jets handled him this season and the lack of passing improvements made in his game since he was first drafted to the Denver Broncos in the 2010 NFL draft.  Since Tim Tebow is only 25 years of age there is a chance that he could leave the NFL for the Canadian Football league (CFL) and hone his skill set. One thing for sure is nothing has become clear since March 1st, the first day of NFL free agency, since both Tim Tebow and Mike Vick are still under their respective contracts with the New York Jets and Philadelphia Eagles.