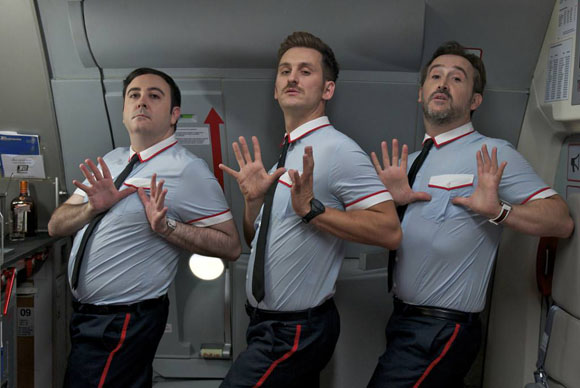 The Spanish phenomena in filmmaking, Pedro Almodovar, who has received a worldwide recognition for his string of masterpieces: All About My Mother (1999), Talk to Her (2002), Volver (2006), Broken Embraces (2009), etc. cheers up his followers with one, bizarre as ever, film parody I’m So Excited!

Essential in their graphic explorations of sexuality, Almodovar’s film sensations bring as much controversy as astonishment for the crafted with admirable elegance film sets, extravagant costumes, vibrant color palette and sophisticated cinematography — equally complimenting the beauty of his female leads and infusing the complexity of his thought-provoking, dramatic narratives.

The eccentric film auteur — who in his resent work (The Skin I Live In, 2011) stuns his audience with the transformation of a kidnaped young man into a gentle woman – isn’t holding back in his absurdist patterns. Although this times the persistent ingredients of edgy, bazar, comical, and shocking are projected into what Almodovar describes as: “light, very light, comedy” where the meaningful storytelling yields completely to a shallow absurdity meant only to…EXCITE!

Set almost entirely inside of a malfunctioning trans-national aircraft heading to Mexico, operated by two bisexual pilots Benito (Hugo Silva) and Alex (Antonio de la Torre), the film is a satire for the aircraft services. Offering occasional peeks at the economy class where the passengers nap the entire time doped up with a muscle relaxer by a pair of careless stewardesses, the story is centered on a trio of eccentric gay flight attendants Joserra (Javier Camarra), Fajas (Carlos Areces), and Ulloa (Raul Arevalo) catering to the needs of a first class mix of odd passengers: a bankrupted banker, a virgin psychic, a retired escort, a hit man, drug-mule newlyweds, and a middle-aged womanizer. Well aware of the danger the plane is heading into due to a technical failure, the perky steward trio decides to step out of duty and devote their time into comforting the frightened passengers with sex, drugs, alcohol, and some entertainment.

Set almost as a stage play where the performances are over the top, the dialogue never rests, the blocking is immaculate and the stylish set pleases with its color composition, the pompous realm serves as a great destruction from the mindless narrative (at least for a while). Soon enough all this gets old and the viewer realizes that the plot is rapidly nearing a dead end. From then on the only thing left to look forward to is the legendary dance number (for those who have seen the catchy trailer) performed by the stewards to the tunes of “I’m So Excited” which comes halfway through the second act and seems to be the highlight of the film. The clumsily performed (though superbly choreographed) dance routine is indeed entertaining, yet as soon as it ends there is not much left to “excite” and the film flops in the middle, offering more of the same.

Nevertheless, a parody is the last genre to be judged for its lack of character or story development. Well aware of the responses to his piece, the world class filmmaker’s agenda is to entertain his fans (as written in the poster), offering a breath of fresh air from the dark subjects persisting in his previous work. And frankly, there is no other way to find understanding in I’m So Excited! unless one is a true Almodovarian. However meaningless it may appear, the film brings out a number of his signature filmmaking patterns referencing his previous work, which makes a lot more sense than it seems. Easter eggs for those already fluent in the “Almodovarian language” are littered throughout the film, from the opening scene featuring cameos from Antonio Banderas and Penelope Cruz (the director’s long-time collaborators) as sloppy airplane workers whose careless behavior causes the malfunctioning of the airplane, to the last scene where a woman appears dressed in Almodovar’s beloved color red, referencing his fascination with femininity.