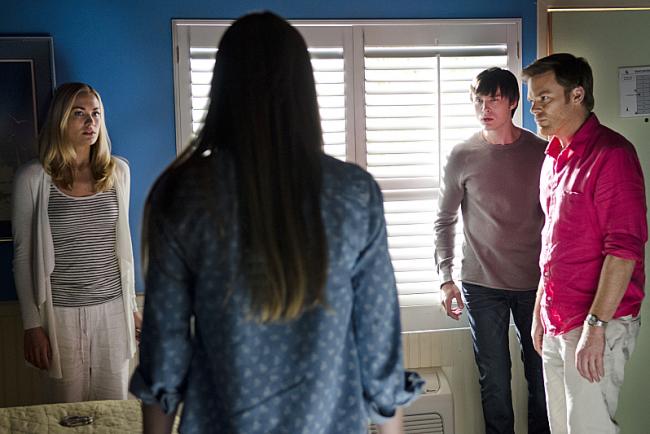 “Are We There Yet?” is by far the best episode within this final season of Dexter. The last seven episodes have been somewhat murky in terms of any real resolution. The theme of family has been building for some time now and the payoff was worth the wait. We’ve finally moved past Deb’s downward spiral and we can focus on our lead, the infamous Dexter Morgan.

In the beginning, Dexter finds out that Cassie from 4B has Zach Hamilton’s blood underneath her fingernails. “What a waste,” Dexter thinks to himself. “He could have had a great future.” After last week, viewers assume that Zach is, in fact, the killer, and that Dexter will more than likely be the one to kill him. Since Zach is still a newbie, all Dexter has to do is follow his credit card trail to an out-of-town motel.

Despite being told to let it rest, Quinn is still convinced that Zach is the killer and he seems to be willing to risk his career to prove the theory to be correct. Quinn pulls Dexter aside to show him to the two images of the bludgeoned victims. Dexter claims that all bludgeoned victims look alike, but Quinn quickly states, “You see any of Zach’s DNA at the crime scene, you let me know.” This is Dexter’s job, so it’s curious he said this since we find out later the blood was planted at the scene.

Deb and Dexter are fighting about Hannah McKay (Deb just can’t get over that pesky little fact that Hannah has tried to kill her multiple times). “She’s using you and you want to protect her,” yells Deb. Later in the episode, she repeats to Elway, “That’s what she does—she murders people and gets away with it!” Obviously she has valid points, but she’s relatively new to the murder ring and doesn’t understand that Hannah is not so different than Dexter.

The writers may have been struggling with Zach Hamilton’s character. Originally, he was a presented as a creep, but when it’s revealed that he didn’t murder Cassie, Dexter finds him and he seems like more of a comedic screw-up; a stooge in the Dexter school of Murder 101. Whatever the cause of the drastic change, he’s much more likeable. This could also be because after a kill, he is at peace with the world. Dexter has too many stresses these days and finds murder to be a second job.

At their accidental rendezvous, it turns out that Zach did kill again, but he was killing by the code (something he actually picked up on his own). While he and Dexter are disposing of the body, Deb shows up to arrest Hannah McKay (she followed the tracking device she placed on Dexter’s ride). In the hotel room, Deb and Hannah are at a bit of a standoff. Deb has the gun pointed at Hannah as she tosses handcuffs on the bed. Since Deb isn’t an actual police officer anymore, Hannah doesn’t take the bait and tells Deb that she will just have to kill her. Deb leaves, not forgiving Hannah but possibly forgetting her.

Back at home, Deb pulls out her old uniform and seems to be considering rejoining the force. Before her Hannah-make-up, she left a trail of breadcrumbs for Elway to follow, which wouldn’t matter if Hannah were leaving with the passport Dexter got her, but she isn’t. During their goodbyes at the hotel room, Dexter and Hannah finally get past the sexual tension by stripping down (except for Dexter’s socks) and rolling around on top of the covers. The following morning, he stops her at the plane and asks her to stay in Miami.

In the final moments of the episode, Dexter comes home and finds Zach sitting in his office chair. Upon further research, he spins Zach’s lifeless body around to see that the mini-killer’s brain has been removed (and delivered to Dr. Vogel). It was obvious that Yates wasn’t smart enough to be The Brain Surgeon, but after this unnamed killer blackmailed Zach, it’s unclear just how smart he or she actually is. Dexter’s work is finally cut out for him and he and his new girlfriend’s lives are the line, along with everyone else in Miami.