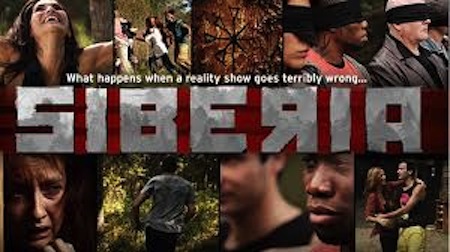 Remember when Survivor was the biggest show in the world, kicked off the second era of reality tv and launched a wave of imitators? Survivor became a ratings juggernaut for CBS, and the show crisscrossed the world, with seasons in Kenya, Brazil, China, Thailand, Fiji, and more. Ten years later, the show is still going and has joined The Real World as a reality tv institution, even though its ratings are far below what they used to be.  Reality tv shows are nothing new anymore, and are now the most watched genre of television. It could be argued that the last great network drama hit was Lost, which kept an audience of millions tuning in every week with strange mysteries and unseen monsters. And now someone has had the idea to combine Lost and Survivor together, giving us Siberia.

Siberia is presented as reality show where sixteen contestants will live together in the remote Siberian forests in Russia. It’s presented, by the perfectly cast Australian host, not as a competition but a social experiment. But as contestants race to find cabins deep in the woods, it definitely feels like they’re competing. The first 35 minutes of the show are a pitch perfect recreation of the first episode of any Survivor season, which makes Siberia feel both familiar and oddly dated. Things start to go awry when loud animal-like noises emanate from the woods at night, in a moment taken straight from the Lost premiere. The twist comes late in the episode after one contestant, Tommy, wanders off deep into the woods looking for food and goes missing for hours. Later at camp, a cameraman bursts from the trees with massive bloody wounds, raving in Russian. The crew rush to get the cameraman out of there, and the host later returns to inform the cast that there has been a fatal accident. Tommy is dead. The episode ends with a brief glimpse of what happened to Tommy, as he and the cameraman are suddenly attacked in woods. The camera falls and we see a flash of a dark shape move in front of the lens.

If you just happened to tune into Siberia, you would completely think it was a real reality show. All the archetypes are there: the old guy, the asshole, the hot girl, the nerd, the nice guy, the alpha male, and even the khaki wearing host. The few attempts to be mysterious early in the episode seem little funny and awkward, and the big twist in general takes a little too long to arrive. If Siberia had premiered six years ago, when the idea of people living and competing in the wilderness was still somewhat novel, the pacing could be forgiven, but now it comes across as a little dated and boring.

The show is presented as fake reality series. They’re not trying to pretend that this actually happened at all, and it’s clearly acknowledged as scripted, while the show itself make great efforts to mimic the styles and tropes of reality tv before the twist happens. This does raise the metaphysical question of what exactly is the frame narrative of the show. Is it supposed to be found footage, or an actual series that some cameraman survived and managed to bring the footage back? Or should we just accept the omnipresent narrative as shown?

Siberia worked very hard to come across as an authentic reality series, and in that respect they succeeded. It’s an interesting idea, I just wish it had premiered in 2006. I’m enough of Lost and sci-fi fan that I’ll check out the next episode, but the show really needs to pick up the pace.