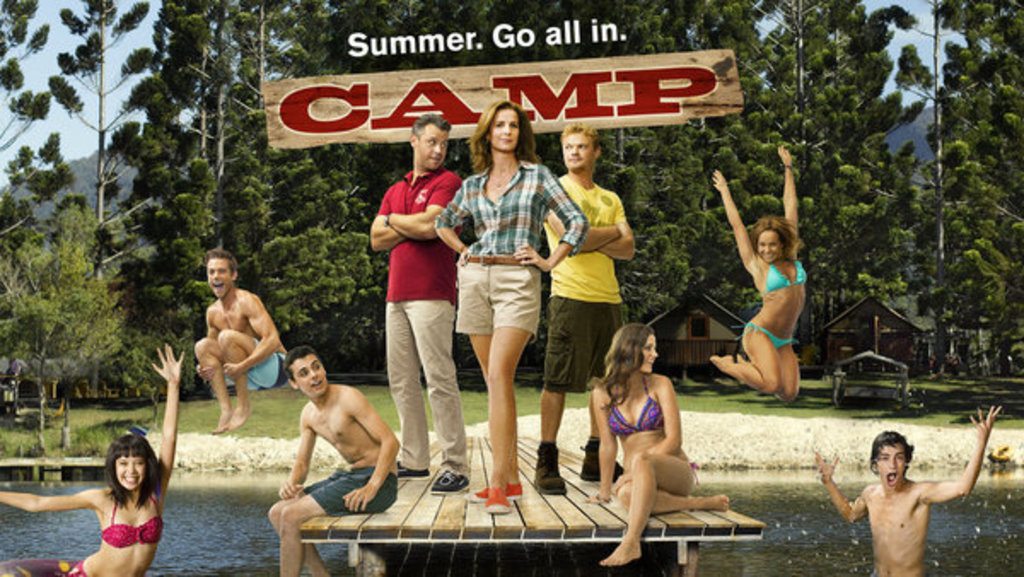 It seems like we have just finished a period of time in pop culture where 80’s nostalgia was in vogue. Wall Street got a sequel, Teen Wolf became a tv show, Red Dawn got an unnecessary remake, and Hot Tub Time Machine just went right back to the decade itself for the maximum amount of spandex and hair spray. Now, just the culture zeitgeist seems ready to move on to plundering the 90’s, NBC aired its new summer show Camp in order to give us Meatballs with iPads.

Camp is a dramedy series set in the Otter Family Camp, run by director Mackenzie Granger, and populated by weary counselors and misfit adolescents over the course of the summer. Mackenzie has crisis to deal with on all fronts. Her teenaged son, who is at the camp, rebels against her every word, her recently ex-husband shows up demanding to be bought out his share of the camp so he can have children with his much younger Russian girlfriend, and she finds herself in an enemies-with-benefits relationship with the direction of the rival rich-kid camp.  Camp director Mackenzie is ostensibly the lead but the show spends amble amounts of time with the large ensemble cast. There’s the tortured artist kid, the beautiful-but-still-rejected-by-the-popular-girls girl, the good looking counselor trying to prove to his love interest that he wants more than a one night stand, and the former athlete who lost her scholarship and now faces an unknown future. All these characters have two things in common. First, they all have a secret that they reveal in a dramatic aside that is supposed to challenge our preconceived notion of the character, and secondly, at the end of the show I couldn’t remember any of their names.

This represents the main problem of the show: its general blandness. This isn’t to say that Camp is poorly made or executed. The cast is fine, it’s well shot, but the whole thing just has such low stakes that it is hard to get invested. The tone of the first episode changes abruptly several times, from family drama, to screwball comedy, to romance, and to social commentary. And while it may be an intentional nod to the genre, often times many of the episodes beats are taken right from classic camp movies. Outsider teens connecting, forbidden romance, rich douchebag antagonists, a sneak attack/raid on the enemy camp. It’s all been done before, and while homages are fine, you’re supposed to also add something new to the genre while acknowledging the past.

I can honestly say that about one third of Camp was funny and enjoyable, but the others two thirds were so bland and middling that it was near impossible to retain any continued interest in what was going on. It’s even harder because you can see the show trying to mix hilarity with serious moments, it’s trying create perfectly imperfect characters, and actor Rachel Griffith is trying to play the character of Mackenzie as more than an Eat,Pray,Love-type heroine, but it all falls a little short. Camp is not terrible, it’s just not particular memorable.