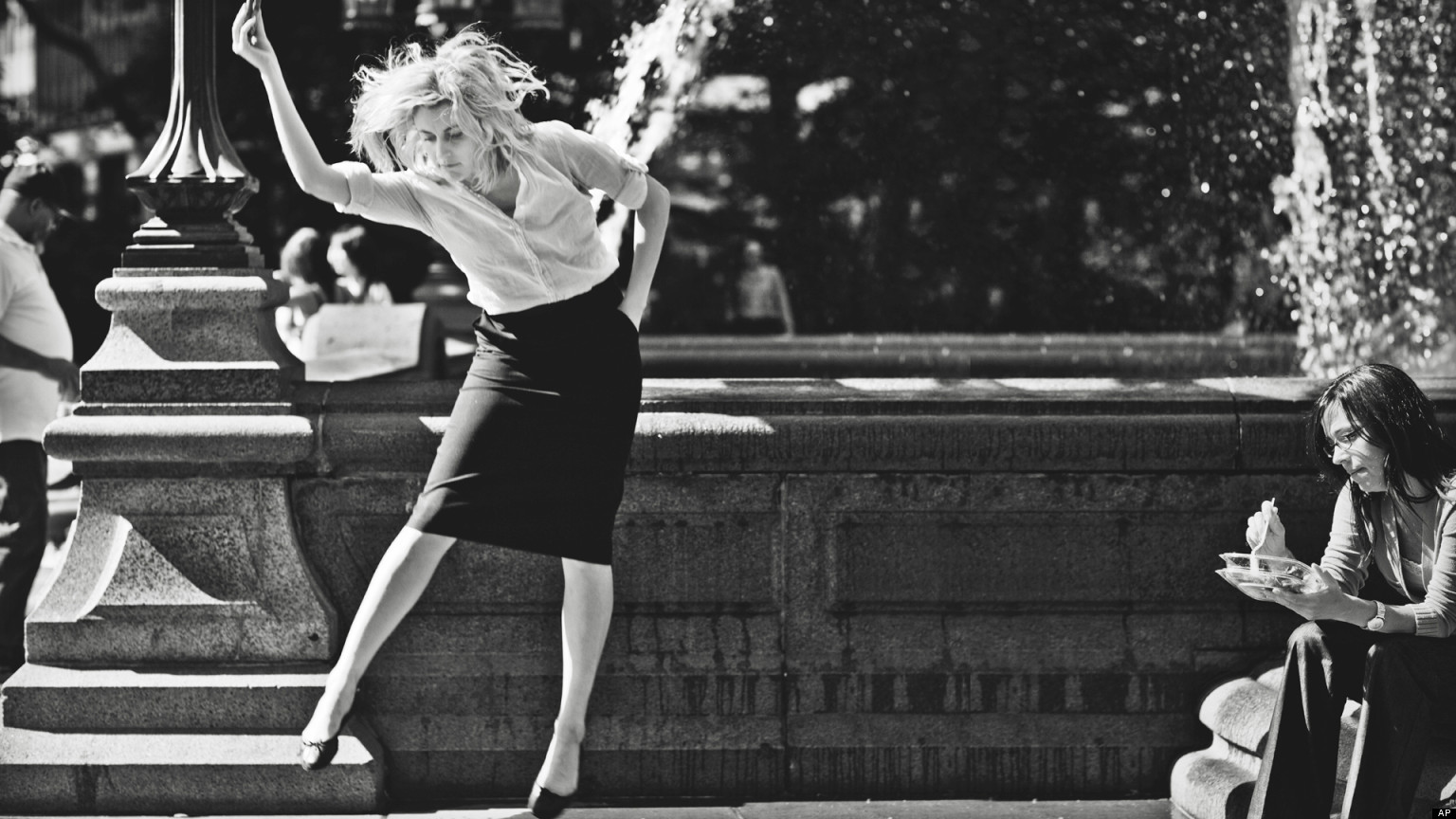 Got Some Fances Ha In You?

She is clumsy, impulsive, irrational, indecisive, and forgetful. She is a 27, “looks older, but not grown up.” She is open and friendly with men, but she labels herself as: “undateable.” She has the right posture and body, but her lack of coordination makes her appear as a caricature of a dancer. She is educated and she reads Proust, but her continuous monotonic speech stigmatizes her as a goof. Her tranquility is almost contagious, yet it gets her nowhere and broke; and her admirable lenience welcomes everyone to take advantage. She is the last person to ask for advice, yet she can comfort you. She makes mistakes and annoys people, yet her big, warm puppy eyes (which the black and white picture accentuates even more) will melt your heart. The success of her friends provokes jealousy in her, yet she hardly sustains it. She is a happy girl. She is Frances Ha (of Frances Ha).

Writer/director Noah Baumbach, known in the film world for his character-centered, dialogue-driven domestic dramas (The Squid and the Whale, Margot at the Wedding, Greenberg) often mocking the urban culture of New York intellectuals, stays true to his craft. Only this time he has targeted the dysfunctional world of post-graduate Frances, who appears to be stuck in it as a forever-apprentice at a company for contemporary dance. Shot entirely in black and white, superbly suiting the spontaneity and candidness of his lead character, the film is considered (but not intended) to evoke the classy style of the French New Wave.

Based on experiences drawn from the life of actress and co-writer Greta Gerwig, the film is rooted in its exploration of friendship as it follows Frances throughout her self-discovery. Frances lives with her friend Sophie (Mickey Summer)- a striving publicist with whom she seems inseparable – and rejects her boyfriend’s offer to move in together, concerned to leave Sophie on her own. Although it seems more that Frances just isn’t ready to let go of her laid-back lifestyle and face the challenges of a relationship.

The film opens by exposing the two soulmates’ eccentric little habits and desires for professional success. While Sophie seems to be more driven and settled in her goals; Frances is caught up in post-graduate mode and hasn’t yet figured out her goals as a dancer. Soon after the characters are introduced, Sophie abandons Frances to move in with her yuppie boyfriend Patch (Patrick Heusinger). The unexpected betrayal tips Frances’ world upside-down, forcing her towards a dilemma: hang on to what she has or reconsider her goals and move on. Things eventually get worse before they get better. She loses her job, her apartment and her self-esteem and the insecurity only gets her to make more bad and impulsive decisions.

Though she resembles some of Baumbach’s previous characters (most notably the titular Margot, who was At The Wedding), Frances stands out for her genuine likability. She may share irrationality, impulsiveness and immaturity with Margot but Frances lacks her condescension, egoism and blunt, unrelenting jealousy.

We have all occasionally had encounters with real-life versions of Frances Ha or even have one or two of them in our daily lives, but what is admirable in Baumbach and Gerwig’s character it that she breaks her own stereotype. Baumbach’s meticulous direction pairs with Gerwig’s absolutely convincing performance (so naturalistic it almost seems improvised) and the rest of the actors to sustain the spontaneity of story and character (rather than appearing as off-the-wall cartoons, performing detached skits in a superficial world).

Entirely centered on Frances, the film follows some narrative direction, but mostly Frances in her chaotic journey to “get her shit together.” Thus the film owns its unpredictability and loose appeal to the character’s impulsiveness that takes the audience everywhere: back home to Sacramento, someone’s family dinner, Barnard College’s dormitory, out in the woods, or even Paris! However, the film maintains an orderly structure all the way through. Even though Sophie’s departure results into Frances’ aimless roaming, the segments of the film (each location she temporary inhabits) are well organized and they are connected. Therefore, nothing stands on its own and the plot is easy to follow.

If some filmmakers prioritize mise-en-scene as a core element in film aesthetics, Baumbach emphasizes never pausing dialogue. Keeping in mind that the ideas for his films spark from simple conversations (the characters and story come later), it isn’t a surprise that Baumbach and Gerwig (also a playwright) deliver a dialogue-driven piece, perfectly suited to their bubbly heroine. Distinctive in its shuffling and repetitiveness of words, and precise orchestrating of clever, memorable punch-lines (always following a meticulous pattern and rhythm), the crafty dialogue certainly makes Frances Ha MORE than a “three-hour-brunch friend.”